Terry Rodman cares for 44 old windmills he's assembled from around the world. 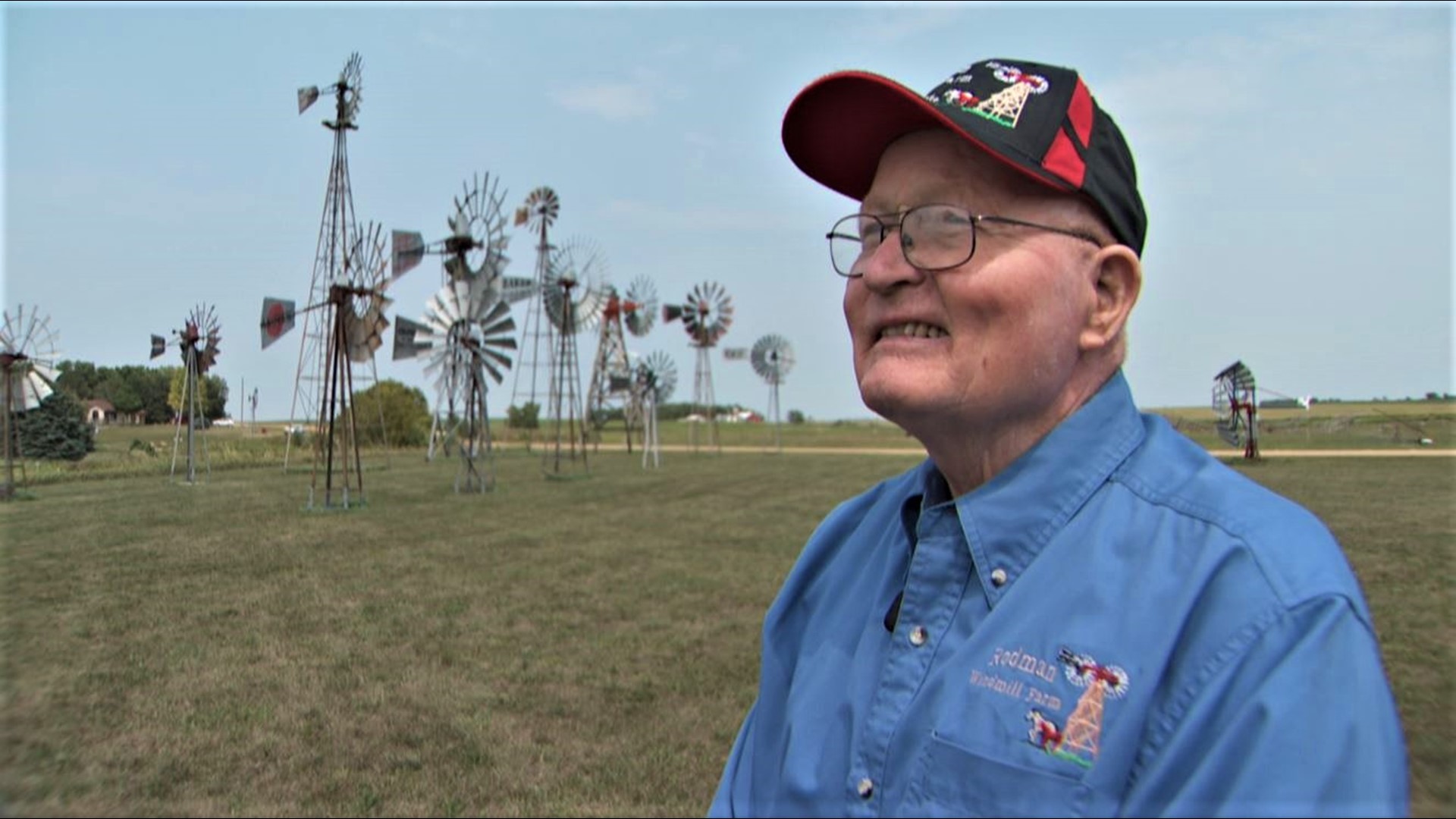 But a few turns down a back road, you'll also find their grandparents.

“It kind of went overboard a little bit,” the owner of the Rodman Windmill Farm says.

As he speaks, Terry Rodman is surrounded by 44 vintage windmills, his words accompanied by a delightful soundtrack of squeaks and rattles produced by blades and gears still dependably spinning a century or more after they were built.

Credit: KARE
Terry Rodman has assembled dozens of vintage windmills on his land near Jasper, Minnesota

“This is an Iron Turbine,” Terry says, pointing up to an early 1900s model with deeply scooped blades. “This one came out of the dirt in California, in the trees somewhere.”

Terry points up at another, this one made of wood, with the name “Bright” on its tail above a patent date of 1880.

“This is the only one in captivity,” Terry says. “It was found in a windmill pile in southwest Texas.”

A few feet away, he teeter-totters down a counterbalanced model called a tip-over windmill.

“So they don't have to climb the ladder to get up and grease it,” Terry explains.

“That's the problem,” Terry’s wife Kris says with a smile. “There's a story with every one of them.”

But then, Kris has only herself to blame.

She was the one, after all, who started her husband's wheels turning with a simple request for a small decorative windmill to celebrate her Dutch heritage.

She got, instead, a half-scale replica – standing 43 feet tall - of a real Dutch windmill, built by Terry.

Credit: KARE
Terry Rodman emerges from the half-scale Dutch windmill he built for his wife

Over the next thirty years, up popped 43 more windmills - with 50-some others lying on their sides, in a field across the road, awaiting resurrection.

“That’s a rest home for them,” Terry says. He glances back at his restored marvels. “Most of these were laying over there at one time.”

Terry pulls a lever that starts the blades spinning on a metal windmill that once lifted water between canals in the Netherlands.

He spotted one like it while traveling in the Scandinavian country.

It’s far from the only time he’s shipped home a vacation souvenir.

“That little one, it's from China,” he says, standing along a row of windmills grouped in their own international community. “Then, the next one from Brazil, and Argentina, Mexico, Canada, Australia, South Africa.”

A few hundred feet away, stands a windmill on a solid base Terry saw in Spain and built as a replica.

“I made this out of an old oil barrel,” he says, “because I didn't think I wanted to ship all that rock home.”

Still, most of Terry's windmills are as American as the Sears Roebuck and Montgomery Ward windmills that bear the names of the former catalogue giants on their tails.

Barbed wire may have tamed our prairies, but it was windmills that kept them hydrated.

Credit: KARE
The old and the new in Pipestone County. Windmills first arrived on Minnesota’s prairies in the late 1800s to pump water for homesteaders and their livestock.

Coming of age in the late 1800s, windmills gained popularity, not for electricity generation, but to pump water for homesteaders and their cattle.

“It's a lot of our heritage,” Kris says. “There’s few museums of windmills, but not a lot, so it takes people to take care of them.”

Terry, a retired welder and blacksmith, is perfectly suited for the constant maintenance the owner of 44 windmills must perform.

Credit: KARE
Part of the collection of vintage windmills on the Rodman Windmill Farm near Jasper, Minnesota

The grandchildren of Terry’s vintage windmills now dominate the nearby prairie skyline.

But Terry Rodman is making sure the old folks can still take their turns too.