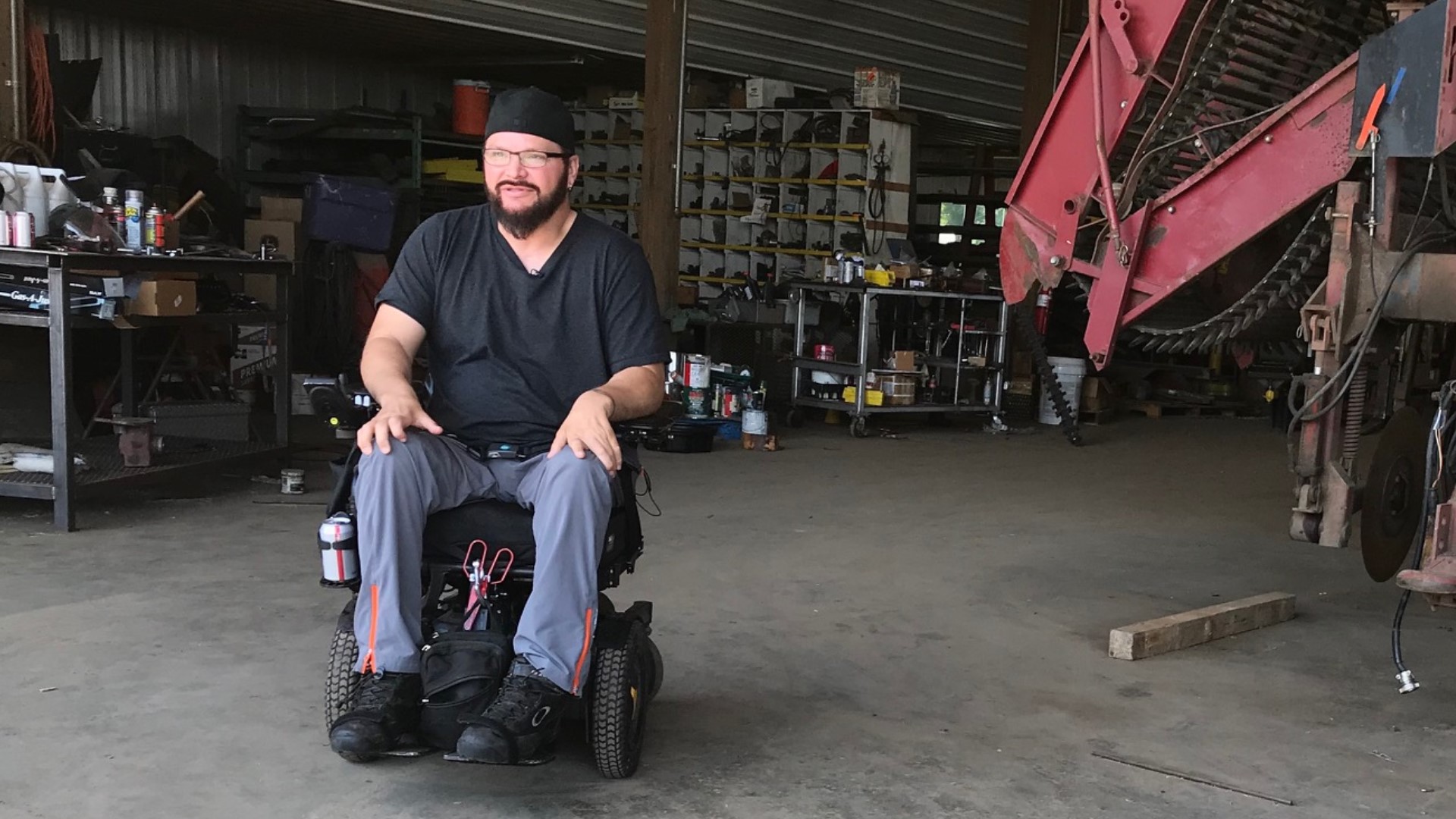 SANTIAGO, Minnesota — For everything there is a season. The Old Testament says it's so. It's also something Mark Edling knows, as he brings in this year's crop of potatoes.

“The smell of dirt,” Mark responds, as only a farmer would, when asked what he loves about this time of year.

While Mark runs the pull-behind harvester from the cab of a lumbering John Deere tractor, brothers Jeff and Brett are in a steel shed back at home base, enveloped by the din of conveyor belts and a myriad of machines, sorting and bagging Edling potatoes.

“This is the big show,” Jeff Edling says.  It is, the Edling’s Super Bowl.  And it just happens to arrive during the kickoff of football season.

Yet, this season is different.

“Very much so,” Jeff says, his voice cracking.

This harvest will be the brothers' first without their dad.

Jerome Edling – dying in hospice - had prayed to see one more crop come in.

By just over a month, he came up short.

Jeff wipes away a tear.  “Oh man,” he says, seemingly embarrassed that emotions have gotten the better of him.

That this hurts so much speaks to the value the Edlings place on family.

But the tears speak also to Jerome’s continued presence around the farm, even after he’d handed over the reins of the operation to his sons.

He points to his Grandpa Stanley and Great Grandpa John. “Both were truck farmers,” Jeff says, “hauled everything down to the farmers market down in north Minneapolis.”

Jeff points again, this time to a photo of a boy in shorts propped on the running board of a flatbed truck. “This is my Uncle John,” he says.

One photo away, an even younger boy sits in the cab of a truck looking out the passenger window - a boy so small, in a truck so big, he couldn’t possibly have climbed into the seat himself.

The Edling family has held strong through potato bugs and foul weather slugs to the gut.

And, it’s held strong through something worse.

“My injury happened on January 20, 2010,” the youngest Edling brother says.

Mark was helping a friend build a shed when he fell from scaffolding.  The fall wasn’t more than 8 feet, but the landing was awkward and happened on winter-hard frozen ground.

“So,” Mark says from the seat of his wheelchair, “then became a C7 quadriplegic by breaking my neck.”

Mark spent three weeks in the Twin Cities in a medically induced coma. Then, another five months in Colorado learning how to, among other things, breathe without the tracheotomy that kept him alive during the days after his accident.

The entire time, Mark was convinced he was done with farming.  “Yep, 100 percent,” he says.

But by the next year farming had lured Mark back.

A fork lift slowly moves toward the open cab door of the John Deere.  Attached to a contraption of his own design, is Mark.

There are potatoes to harvest, and despite Mark’s paralysis, the elevated fork lift will push him toward the tractor’s driver’s seat – the place he is happiest.

Jeff remembers the first time his brother was lifted into the cab the summer after the accident.

“Put him in there, it was like a duck on water,” Jeff says.  “Away he went. I think we all were smiling.”

Credit: Boyd Huppert, KARE
Mark Edling is lifted by fork lift into the cab of a John Deere tractor

Mark has regained just enough hand movement to work the controls for the tractor and harvester.

“I just kind of punch them. And push them around,” he says.

What Mark can’t do himself, “The people around me help me, my truck drivers,” he says.

This harvest is Mark's eighth since his accident.

“Once I'm in there,” Marks says, pointing to the tractor cab, “I felt normal. I felt normal again.”

Middle brother, Brett, says of Mark, “He's got a pretty good drive, you’re not going to keep him down.”

But, then, Brett could say the same of himself.

Brett is undergoing chemotherapy for a blood disease that left him deaf and with damaged vision.

The wires of cochlear implants run from Brett’s ears to the back of his head.  When attached, they allow Brett to hear again.

“We're all going to be dealt some sort of challenge in our life,” Brett says. “It just depends what you want to do with it.”

This harvest, Bennett Edling, Brett’s 16-year-old son, is driving the truck, receiving the potatoes dispensed by the harvester his uncle Mark operates feet from his driver’s seat window.

“I'm definitely learning a lot from him,” Bennett says. “I've been watching him since I was really young, but he's a pretty good teacher and I'm excited to take over.”

So, it continues. Another generation in the starting blocks.

“He's learning, eventually he's going to be in this chair,” Mark says from the seat of the big tractor.

There have been days, amid the pain, when the Edlings have struggled to find a reason.

But never have they stopped living for this season.

“You just keep going,” Mark says. “I don’t think there’s any other option.”

MORE: Grandpa spends a decade making 10 violins for his grandkids

1 / 12
KARE
Photo from the Edling family album, shows a young Jerome perched in a delivery truck.