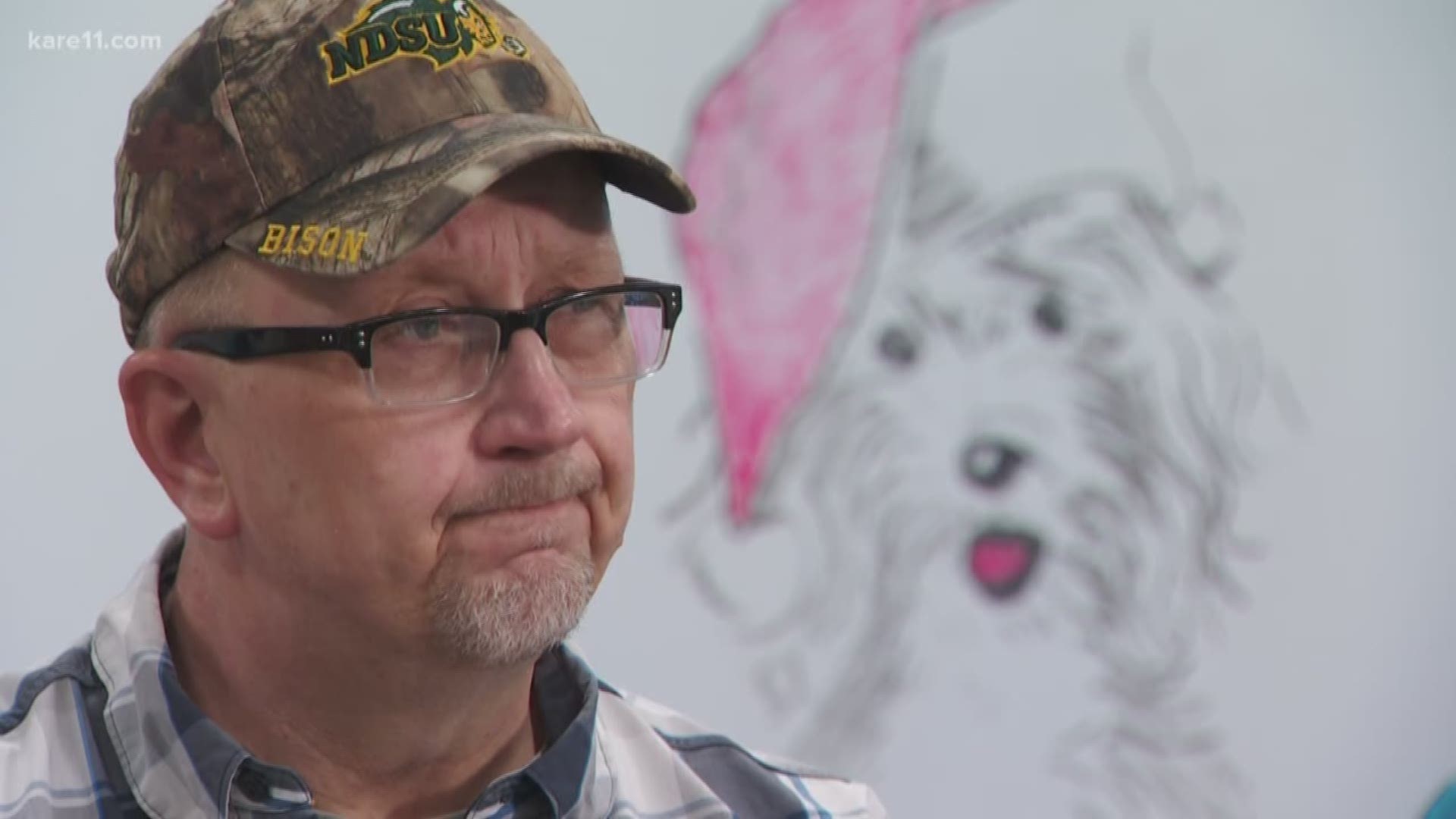 For days the mystery deepened.

Students and teachers at Christian Heritage Academy showed up for class to find drawings on their whiteboards.

In some rooms cartoon characters stared back at them. In others, religious figures graced their whiteboards - all beautifully sketched with dry erase markers.

“We didn’t know where they came from,” teacher Liya Skladanovskiy said.

It took a few days, but eventually they had their answer. The mystery whiteboard artist was Myron Peterson, the school’s new janitor.

“It’s a blessing to be here,” Myron said an hour before the start of another school day.

In his right hand, Myron clutched a marker as he drew on a classroom whiteboard a picture of a fly fisherman in mid-cast.

For Myron, it’s a blessing to draw – but also a blessing, even, to be able pick up a bucket and mop.

“Yeah,” Myron said, snapping his fingers. “You just never know how your life can change like that.”

It's been two years since Myron crept up I-35 in Burnsville during a snowstorm, driving between buildings for his job as a facilities manager.

As Myron waited patiently in traffic, another driver, going too fast, slammed into him.

The janitor job at Christian Heritage Academy that Myron started last fall, is his first attempt to work a regular job since the brain injury sidelined him.

It hasn’t been easy. Daily, Myron battles debilitating headaches. Sometimes the pain is so intense, he calls a family member to drive him home.

But the brain injury also left Myron – once no more than a stick figure doodler – with artistic talent he can’t begin to explain.

“Yeah, it's therapy, that's for sure,” Myron said, as he sketched a picture of Jesus on a classroom whiteboard.

Another room gets a cardinal – and another, hummingbirds.

“They come in and they get all excited,” says Marcia Budnik about her second-grade students. “'Look who's on our board today!’”

Skladanovskiy, the school’s language arts teacher, still talks about the day she noticed an extra drawing hanging in the hall, among the assignments handed in by her students.

Closer inspection revealed a signature near the bottom of the drawing. “Myron,” it read.

“He completed his own assignment,” Mrs. Skladanovskiy said with a smile. “He did awesome, he got an A.”

Daily, the students’ music wafts across the school. Their singing and practicing of instruments brings comfort to Myron as he goes about his work.

They share a gift with him, then Myron goes to the classroom whiteboards and gives a gift back to them.

Christian Heritage Academy Principal Gail Wolfe said Myron has formed a unique relationship with her students in a short time. “He’s usually here off hours, so they don’t necessarily see him, but they know who he is because of these drawings.”

Principal Wolfe had placed an ad for a part-time janitor. She got so much more.

A school and its janitor are making a mark on each other.