'We're still together.' Teen poses with best friend in senior photo - two years after her death

Haley Donley and Heather Doucette, best friends since elementary school, will be side-by-side in their high school yearbook as they had planned. 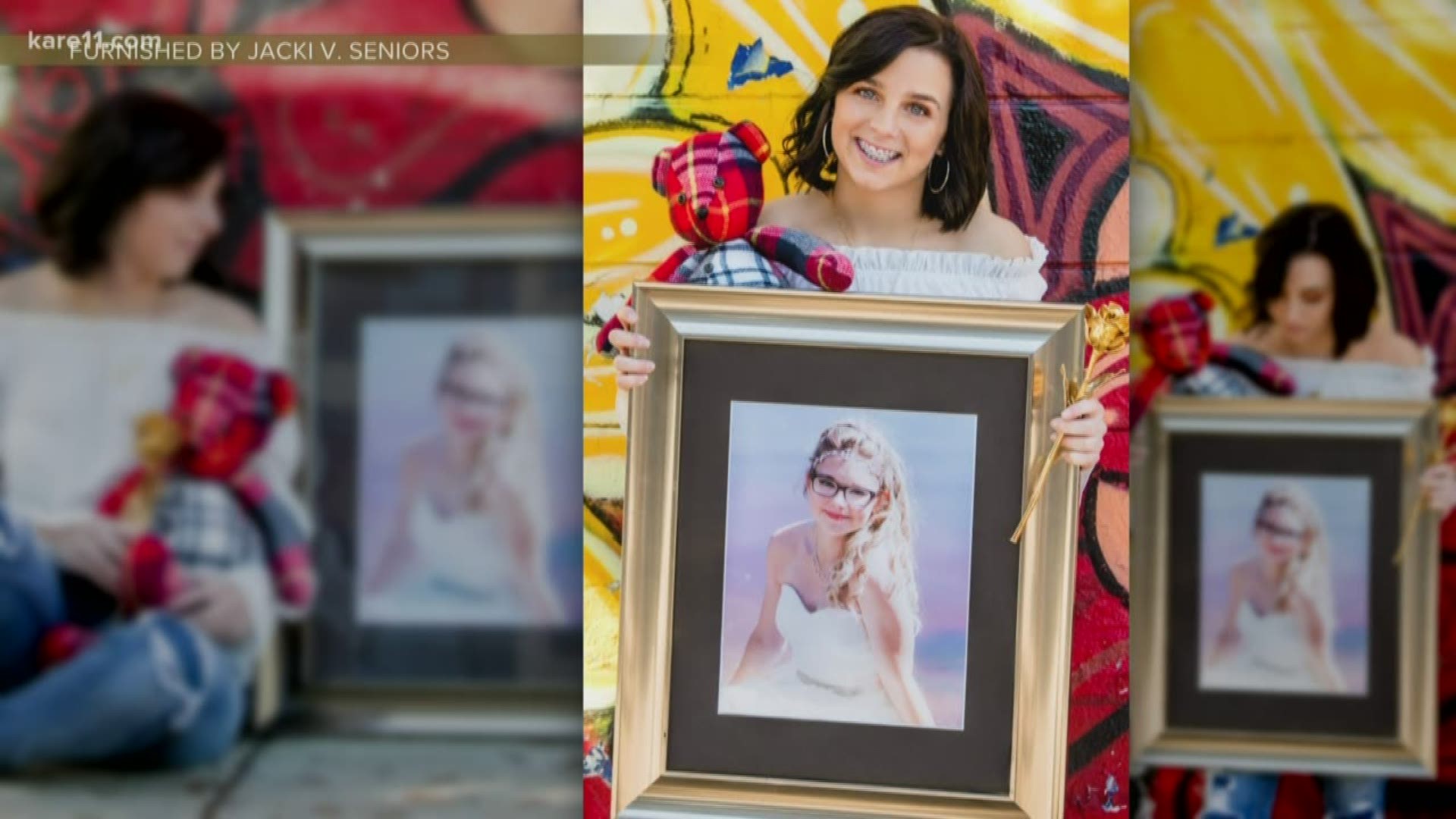 Credit: Jacki Vaughn
Haley Donley poses with a picture of Heather Doucette for her senior photo.

Now, Haley Donley and Heather Doucette will share space as graduating seniors too, even though Heather died last year in a car crash.

“I’m glad I could do this for her,” Haley says.

This fall as Haley posed for her senior photo, smiling bright with her braces sparkling, she held in her hands a portrait of Heather, her best friend since elementary school.

“We did pretty much everything together,” Haley says. “And we’re still together.”

“If my daughter had passed away and her friend had chosen to honor her like that, I can't imagine a better gift you could give to somebody's mom.”

Jacki took solo photos of Haley too, but when the time came to choose the picture for her yearbook, Haley didn’t hesitate.

“I was stunned,” Jacki says. “Haley just pointed and said, ‘That’s the one. That’s the one I want for my senior picture.’  And then I cried.”

Credit: Chad Nelson - KARE 11
Photographer Jacki Vaughan with one of the pictures she took of Haley and Heather

At Haley’s request, Jacki contacted the school which agreed to print the photo in the yearbook with both girls’ names underneath.

Since meeting at their adjoining lockers in fifth grade, Haley and Heather have been next to each other in every Zimmerman yearbook.

But senior year is special.

“Now she’ll be right there next to me in the yearbook like we’ve dreamed of since fifth grade,” Haley says.

Heather died on February 3rd, 2018 in single-car rollover on a slippery I-35 near Cloquet.  Her mother, who was driving, survived, as did Heather’s younger sister, who suffered serious injuries in the crash.

Credit: Chad Nelson - KARE 11
A cross marks the location along I-35 south of Cloquet where Heather Doucette died.

Heather’s family had just moved to Two Harbors, meaning the best friends would be separated.

Yet, with the joint portrait, Haley was determined to fulfill the plans she and her best friend had made years earlier.

Haley looked through hundreds of photos before choosing a picture of Heather taken two years before Heather’s mother’s wedding.

“She looked really beautiful on that day,” Haley says. “She was a princess.”

As Jacki captured the senior photo, Haley clutched Heather’s portrait while supporting on her right side a teddy bear made from Heather’s favorite scarf. In the fingers on her left hand, Haley held a golden rose for Heather’s middle name, Rose.

Amanda Valerius, Heather’s mother, says Haley’s loyalty to her daughter “means the world” to her.

“It's been kind of bittersweet watching her friends posting all their senior pics, Amanda says, wiping away tears. “Now I got to see my baby girl on a senior photo.”

Haley says she made her decision out of gratitude for the years she and Heather spent together, but also to let everyone know Heather will not be forgotten.

“The only way to get her to graduate with me was bring her along,” Haley says.

1 / 7
Chad Nelson - KARE 11
A cross marks the location along I-35 south of Cloquet where Heather Doucette died.