The man buried outside the cemetery fence

Keith and Les were boys when their dad told them the story he’d first heard as a boy from his parents - the story of a man buried outside the Steelesville Cemetery fence. 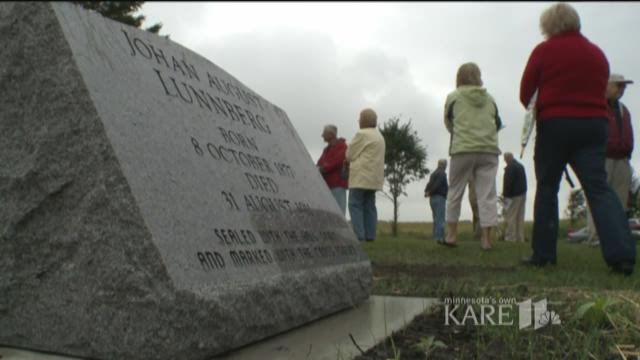 DASSEL, Minn. - Some stories are buried deep, lost to the years and never again unearthed. But a story picked up and carried from the Steelesville Cemetery 100 years ago, is traveling still.

“We'd hear about it from my dad primarily,” said Les Bergquist, standing in the cemetery with his brother Keith. “It was just part of this place.”

Keith and Les were boys when their dad told them the story he’d first heard as a boy from his parents - the story of a man buried outside the Steelesville Cemetery fence.

That same story brought Les Bergquist to the Dassel Area Historical Society where a century-old copy of the Dassel Anchor newspaper filled in the gaps in graphic detail.

The article recounted how Johan August Lunnberg, a young blacksmith, barged into a neighbor’s home, stole a gun and held the sheriff at bay.

It was written with words that reveal much about attitudes a century ago toward the mentally ill. “In a fit of temporary insanity,” the article stated, “the maniac placed the gun to his head and pulled the trigger.”

The verbiage provided context for the story the Bergquists grew up hearing, of a father who loaded his son's body in a wagon and dug a grave outside the Steelesville Cemetery.

“They put him on the outside of the fence,” said Kenneth Bergquist, father of Les and Keith. “Yep, they wouldn't take him in the cemetery.”

Denial of burial by Christian cemeteries was once common when a life was taken by suicide.

The Bergquists could not rewrite the beginning of the story, but no one said they had to be satisfied with the ending.

A day before the 100th anniversary of Johan August Lunnberg’s death, a worker lifted into a place a granite grave marker.

The stone engraved with Lunnberg’s name was purchased with grant money from a local co-op. It was placed near the grave Johan's father had dug, but this time just inside the line where the fence once stood.

“Kind of fulfilling to see it come to a close,” said Les Bergquist, looking on. “It's kind of breathtaking to know it happened 100 years ago tomorrow.”

The marker was placed within sight of an open space in the Lunnberg family plot - the grave near his parents in which Johan would likely have been buried had he died in a more enlightened time.

Paul Holm, president of the Steelesville Cemetery Association, called it “making something right that hadn't been right for all this time and giving Mr. Lunnberg the respect that all of us should have.”

But there was still one wrong from the story the community needed to make right. A few days after the stone was laid, Gethsemane Lutheran Church held a Christian service for Lunnberg at the cemetery.

“Even the fence was removed, but the story was never forgotten and today we do what should have been done 100 years ago,” preached Pastor Steven Olson. “If the future is willing the story will live on. Bless this monument in memory of Johan August Lunnberg.”

Now, six years later, the story is still being repeated, but with a new chapter about a community that righted its mistake.

The man left outside the fence is no longer left alone.

Note: This story was first published by KARE 11 in September of 2011.

If you are in crisis, or are worried about a loved one, we have gathered resources to help atkare11.com/roadtohope.