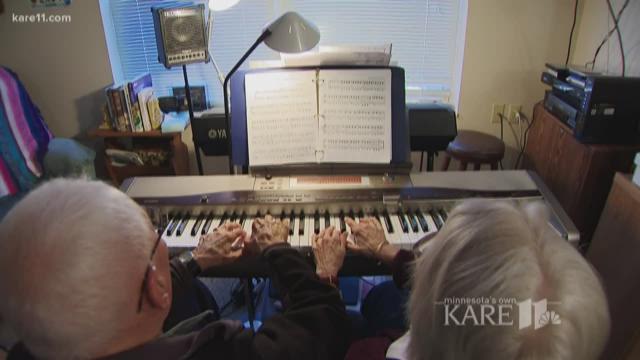 MINNETONKA, Minn. – Charleen Mortenson’s parents didn’t have a lot of money when she was a girl, but they always scraped together 75 cents for her weekly piano lesson.

Decades later, that investment is paying off in happiness.

“I just sit in the room and listen to them play, hours they’ll play together every day, and it’s just wonderful,” says Jody Mayer, Charleen’s daughter.

Charleen lost her husband, Darrell, last year the day after Christmas. He was 81.

Wedding photo of Charleen Mortenson and her late husband Darrell

“We were going to die together in our 90s,” Charleen says sadly. “We just thought we'd make it to our 90s together.”

Charleen’s family helped with the move from her home in Hutchinson to Elder Homestead in Minnetonka.

The transition was not easy for Charleen, who was still grieving, both the loss of her husband and the life she had known and loved in Hutchinson.

“There'd be mornings she'd be crying and not wanting to get out of bed,” her daughter says.

The tide began to turn a few weeks later when Duane Anderson moved into an apartment just down the hall from Charleen.

“I was looking for a piano player,” Duane says.

The WWII veteran had once dreamed of pursuing music ministry, but a mortar explosion during the Battle of the Bulge shattered Duane’s hands, as well as his plans to one day play for church congregations on organ and piano.

“She actually is my eyes and my ears,” he says of Charleen, “because if I make a mistake, and she catches it, she will tell me.”

The hands of Charleen Mortenson and Duane Anderson

Side-by-side they sit at the keyboard in Duane’s apartment, four hands at work playing hymns and standards.

“We’ll play a little, hug a little, that sort of thing,” Duane says, his eyes welling with tears. “I’m part of her life, you know, that’s important.”

They play for fun, but also share their musical talents with other residents in the Elder Homestead community room. On a recent afternoon, Elder Homestead residents clapped, sang and swayed along to the music.

“Every day I would tell her she had a purpose,” says Jody Mayer, reflecting on her mother’s difficult transition. “I think she’s starting to believe it now.”

Duane has also known loss, having said farewell to his wife and two of his children. But Charleen and Duane said when they are playing together. “I don’t know which is the most fun,” Duane says, “playing or having a partner.”