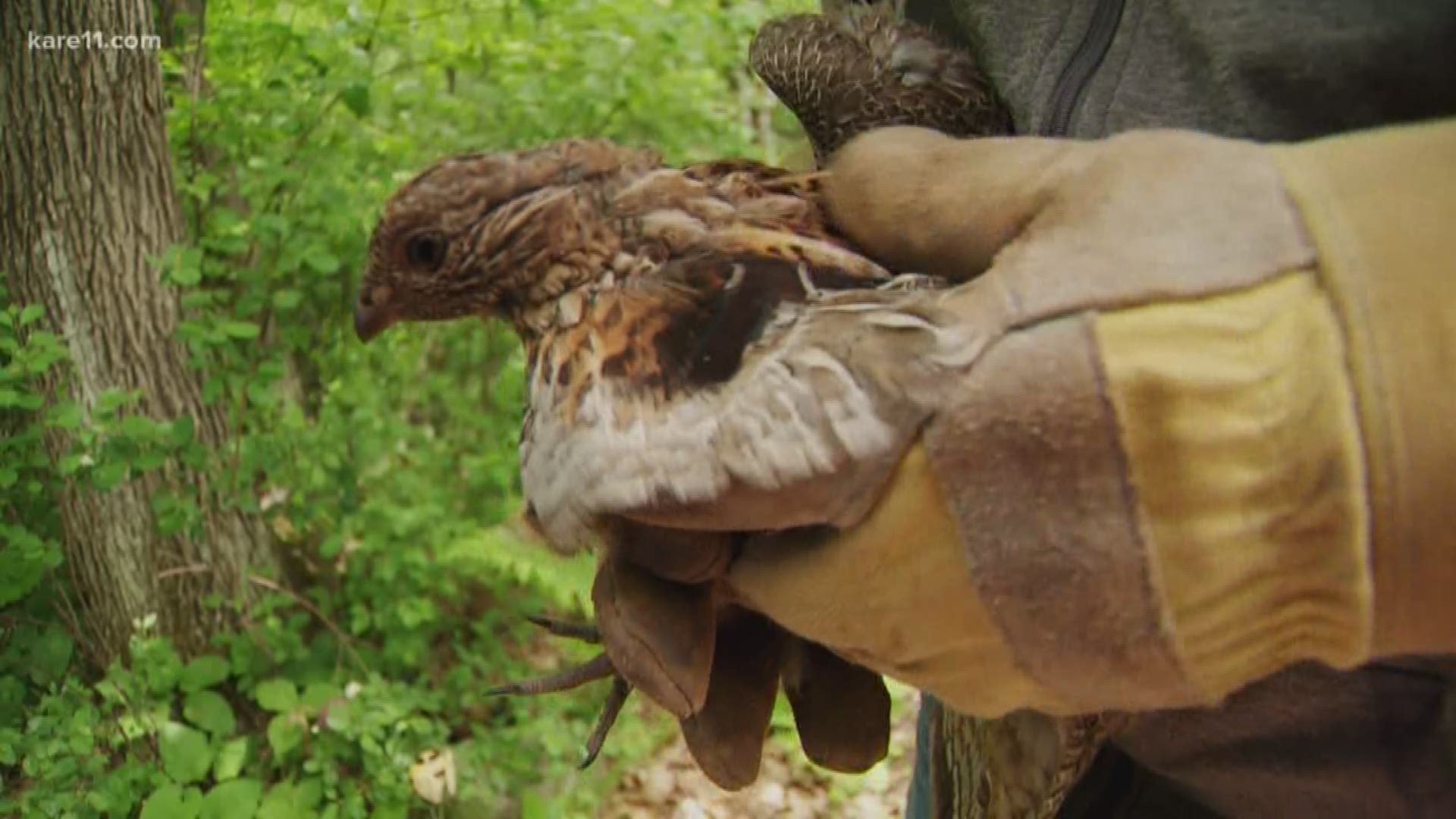 “This amazes me,” Bob says as he cradles the ruffed grouse he named Lulu in his hands. “I don’t know what possessed her to be so tame,” he says.

The friendship started three years ago in the 40 acres of woods behind Bob’s home.

Bob was grading a trail with his tractor.  “And all of a sudden here's a grouse, comes out the woods and stands right in front of the tractor. I had to stop or hit it,” Bob says.

He climbed off the tractor. The grouse didn’t back away. In fact, she started cackling at him.  “I stood there and talked and talked to her,” Bob says.

Each day Bob drives his golf cart down the dirt trail through the woods to check on his friend.  If the sound of the approaching cart doesn’t roust his grouse, Bob’s calls summon her.

“C’mon bird, c’mon Lulu,” Bob says over the hum of the golf cart as he slowly drives down the trail.

Lulu emerges from the underbrush.  “There’s my bird,” Bob says.

Lulu clucks and squawks as Bob takes off his cap and engages the grouse in some playful sparring.

“Should I put it over you,” he joshes, pretending to place the cap on Lulu’s head.

During the past year the friendship has taken on even greater significance.

In the months before Jeanne’s death, Bob would drive her in the golf cart three times a day to visit Lulu.

As Jeanne’s condition worsened and she was mostly housebound, “It was the one thing they could do together still,” Bob’s daughter, Wendy Flach-Meagher, says.

“Dad had kind of rigged the golf cart up for her oxygen and we'd bundle her up and put blankets on her and they'd go out and visit,” Wendy says.

The golf cart rides to see Lulu were a wonderful distraction from Jeanne’s declining health.

“She was pretty much on the couch most of the time, or laying down, and then she’d just say, ‘Let’s go for a ride, let’s go out and see if we can find Lulu,” Bob recalls.

“When you are living alone and all alone all week, I can come out and talk to Lulu.  We can talk about anything, she don't care what I talk about,” Bob says.

“I think it's very therapeutic for him,” Wendy says.

Wendy is open to the possibility of a higher power being involved.  “You don't always understand it” she says of the relationship between Lulu and her dad, “but you know it's meant to happen.”

Bob gently cups his hands around Lulu.  He strokes the feathers on her back with his thumb.

They are calm and comfortable with each other.

A bird in the hand may well be the best gift a grieving spouse has ever found in the bush.

1 / 7
Boyd Huppert, KARE
Jeanne Flach became good friends with Lulu the grouse in the difficult months before her death.