MPD used tear gas on crowds, who called for justice after the death of George Floyd. 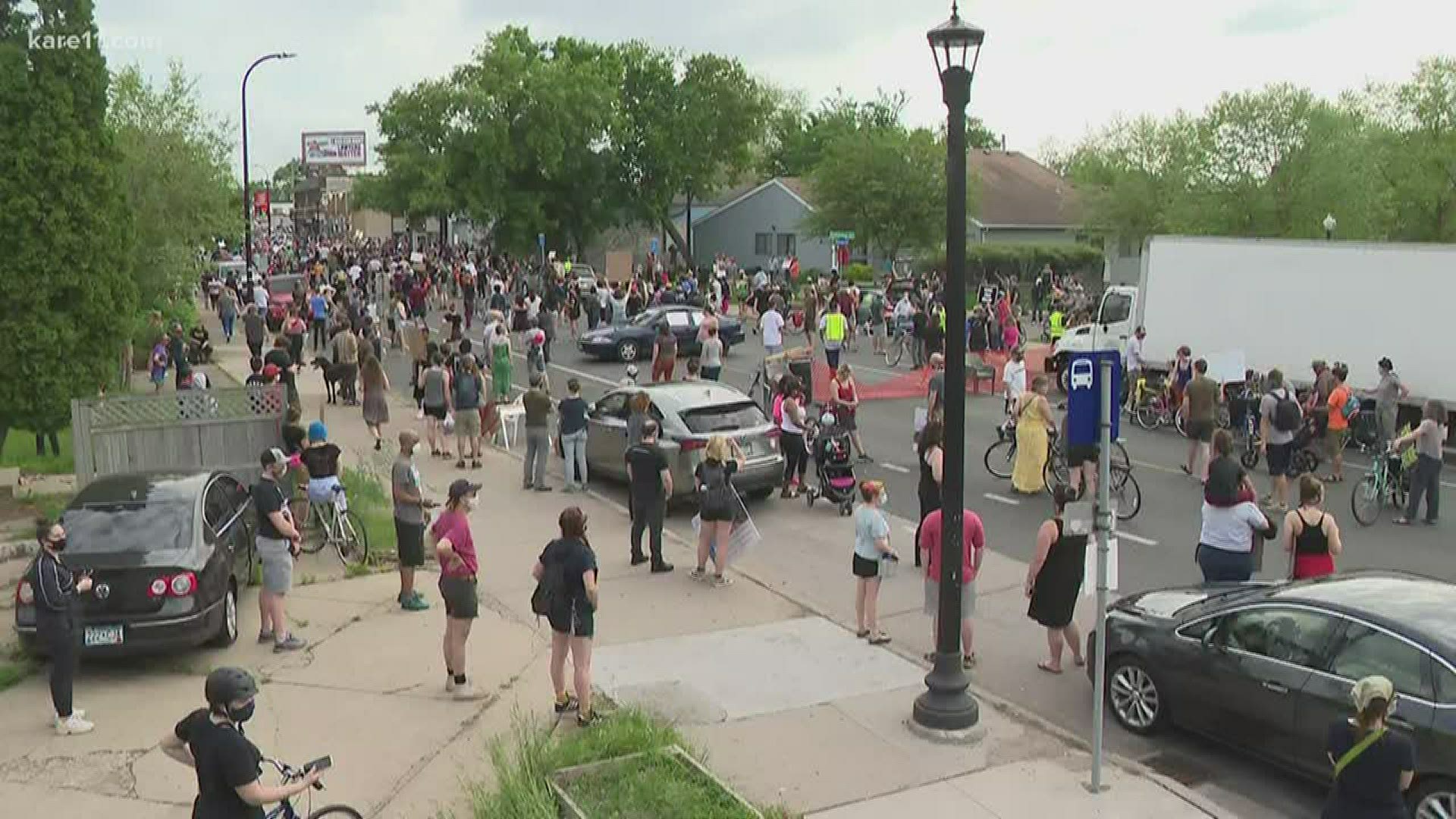 MINNEAPOLIS — Demonstrators angered by the death of George Floyd blocked off several city streets in the Powderhorn neighborhood on Tuesday afternoon before marching to the Minneapolis Police Department’s Third Precinct, where officers in riot gear deployed tear gas and sent crowds scrambling in the rain.

The protest began in the early afternoon near 38th Street and Chicago Ave in South Minneapolis, fewer than 24 hours after bystander video showed a police officer holding his knee on top of Floyd’s neck at the same intersection. He later died, leading to the firing of four officers on Tuesday. The case caught the attention of the FBI and prompted Democratic presidential nominee Joe Biden to call for “justice” in a tweet.

Throughout Tuesday morning and early afternoon, activists, neighborhood groups, and community organizers created memorials at the 38th and Chicago intersection and drew messages such as “No Justice, No Peace,” “RIP” and “Remember His Name.”

Angie Evans, who has attended church for two decades in the neighborhood and brought her 10-year-old daughter to the protests, said the video of Floyd in police custody “mortified” her.

“I couldn’t sleep,” Evans said. “It was just a horrible experience to witness something like this in broad daylight, in front of all these people. It’s heartbreaking. I feel like we’re taking a step backwards.”

Leon Lyons, a longtime resident of Powderhorn, said the images evoked memories of Philando Castile’s death – which was streamed live on Facebook by Castile’s girlfriend. Although he called for criminal charges, he praised MPD for firing the officers involved.

“Praise the Lord, Praise the mayor, and praise the chief of police,” Lyons said. “This is the first time it’s ever been like this.”

As the late afternoon hours turned to evening, thousands of demonstrators arrived on scene with signs and bullhorns, spreading throughout multiple blocks. Amid the COVID-19 pandemic, many people wore masks, and organizers distributed face coverings to those who did not have them. Shortly after 6 p.m., organizers led a march to the Third Precinct a few miles away, just east of the Hiawatha and Lake Street intersection.

KARE 11’s reporting partners, MPR News, said that squad cars and precinct windows were broken at some point in the early evening.

Shortly before 8 p.m., with rain beginning to fall, uniformed officers in riot gear began to deploy tear gas, casting a haze over an entire block. Many of the demonstrators began running toward the nearby Target parking lot on East Lake Street, as loud booms filled the background. Police marched into the streets as people began throwing water bottles and other items at them.

All of it was evidence of the anger over George Floyd’s death.

“We’re all in this together,” said Angie Evans, who is black. “Out here, you see black people, white people, Asians, Hispanics. We’re tired of it. We need justice.”

With regard to the continuing protests, Minneapolis Chief of Police Medaria Arradondo offered the following statement:

"Today a group of individuals have convened at the 3rd Precinct who have participated in assaultive behavior and destruction of property. Their actions are placing people at great risk of being seriously injured. We will continue to safeguard 1st Amendment speech and assembly however that should not come at the expense of other’s personal safety. I’m urging those who are gathering to please do so peacefully. Criminal behavior will not be tolerated."

RELATED: Reactions to the death of George Floyd