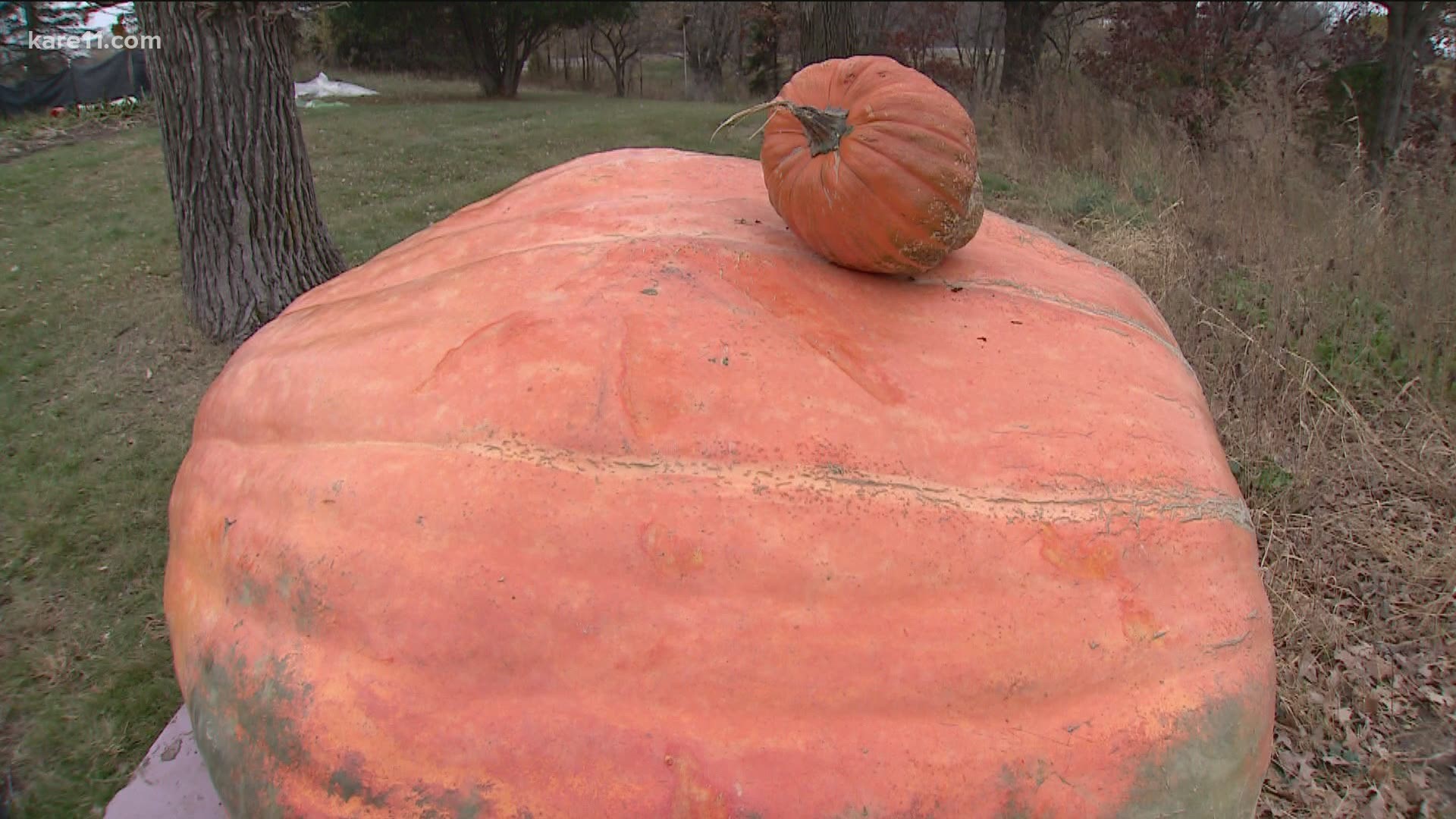 ANOKA, Minn. — They say there's a tree in every seed, but when Travis Gienger planted a seed six months ago, he didn't think it would turn into a whole lot of pumpkin. I mean, he knew it would be a pumpkin, but not one of this grandeur.

"You can only hope," he said. "We had never guessed when this started this spring that we were going to have the biggest in North America."

After months of tending to his garden, of watering his big baby up to eight, nine times a day and hoping for warmer, better conditions daily, he and his prized orange jewel walked away with a title one can only earn.

"Grand Champion Grower 2020," Gienger said, proudly showing off the patch on the jacket he received at the championships in Half Moon Bay, California. "Half Moon Bay. So it's kind of like winning the Master's when they put it on you. It's kind of funny."

Gienger said he named the pumpkin Tiger King after he noticed that the pumpkin was going to retain its orange color. He said initially it had white-ish stripes, like maybe a tiger would. Currently, the greatest pumpkin from the Halloween Capital of the world sits at 2,350 pounds

Gienger's love of big gourds though, has a longer history than any vine. Back in 2011, KARE 11's Boyd Huppert featured Gienger in his Land of 10,000 Stories series. Back then, Gienger said his pumpkin Chewbacca was growing upwards of 250 pounds a week.

"I think it was like 1,200 some odd pounds already taping," Gienger recalled. "I had a vine rot and it kind of went down after that but it still ended right around 1,300 pounds. For that time, that was pretty good."

Credit: KARE 11
In this photo from 2011, Travis Gienger poses for KARE 11's Boyd Huppert with his pumpkin, Chewbacca.

As a gardener, as someone who plants hope, Gienger wasn't one to give up after 2011. His optimism paid off, because this year was the year of the Tiger King. Just like he had back in 2011, Gienger also stuck to a tradition of keeping an element of surprise for himself.

"Growers thought I was crazy just to rally out there without putting it on a scale," he said, referring to his pumpkin. "I've done it before. It just kind of wrecks the fun. Who knows what it's going to be."

He said he had a good idea of how much it would weigh, based on experience and taking a look at the dimensions of the pumpkin. But the exact weight, he didn't know until they put Tiger King on the scale in California.

The fun, likely to double when you turn out to be world champion.

"It was six months of work coming down to one final, 'what does the scale read' number," he said. "And having not pre-weighed it at that point, your mind does some interesting things but I was just relieved when it said 2,350. I said, 'Hey, I'll take that all day long.' We won and that's all we wanted."

Gienger said Tiger King's appearances are far from over. He plans on having it carved with a Tiger design and running it through Anoka's 100th anniversary Halloween party at the end of this month.

Watch Boyd Huppert's 2011 story with Gienger below or click here.