Granny's Kitchen Fudge Puppies' owner believes the fair is being vengeful in not allowing the potential new owner to continue operation. 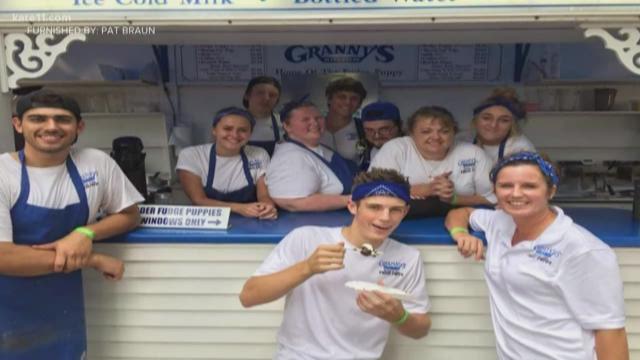 FALCON HEIGHTS, Minn. — For nearly 30 years, the Fudge Puppy, a chocolate covered Belgian waffle, was a staple at the Minnesota State Fair.

Pat Braun named Granny's Kitchen after her mom, who worked at the food stand until she was 90.

"She just had so much fun and the customers were so good to her," Braun said.

But this year, the tradition comes to an end.

Pat's not able to run the stand anymore because of health problems. So she wanted to pass ownership onto her long-time employee Karla Anderla.

But that requires approval from the fair.

So Karla applied and waited for months. And in May, having heard nothing, Pat says she emailed the fair to explain how switching spots would be expensive because of how their stand is set up.

"And then, Karla hears about four days later, 'Nope, you're out!'" Braun said.

The fair's official reason for denying the application, in a statement, is, "It became very challenging to move forward with the potential new license holder due to the previous owner's continued involvement."

"My husband and I both felt like we were sucker punched. We went, 'What are they talking about?'" Braun said.

Pat doesn't know how one email is considered "continued involvement" and why that should prevent Karla from taking over the stand.

"And that's why I'm doing the interview. I didn't want to do the interview, but I'm fighting for other people," Braun said. "I don't want other stands to go through this."

And she's sad her long-time business comes to an end like this.

When asked the future of the Fudge Puppy, Braun said, "Dead. Done. People ask me where we can get it. Nowhere."

The state fair said they'd consider revisiting the application in 2020.