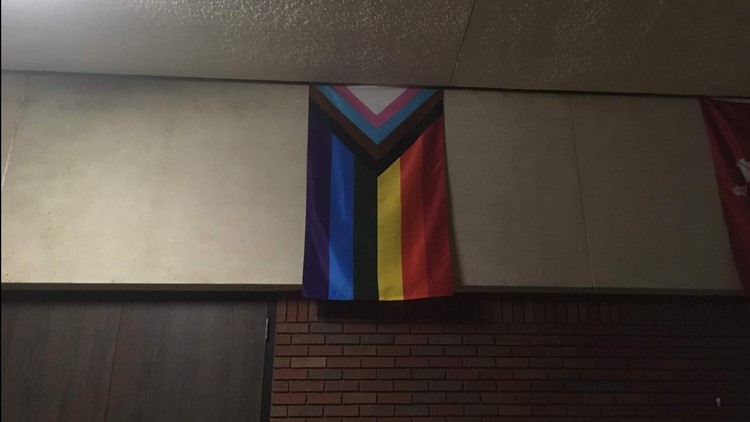 Photo by: KARE
Photos provided to KARE 11 show a rainbow pride flag hanging on a wall inside Marshall Middle School.

MARSHALL, Minnesota — A display featuring a rainbow pride flag in the cafeteria at Marshall Middle School led to a lengthy community discussion at a school board meeting this week, where an attorney vowed a lawsuit unless the district changes its policies which allowed the flag.

Photos provided to KARE 11 show the pride flag hanging on a wall inside Marshall Middle School, alongside flags representing countries from around the world.

At Monday's school board meeting, several residents, leaders of the faith community, and students at the school all shared their thoughts with the board, both in support and opposition.

"What's next, curriculum teaching this lifestyle in our classrooms?" one opponent asked. "We do not want our children to be learning in a hostile environment."

"We as a church plead with you to rest in God's wisdom and remove this flag and its influences from our school," a Baptist pastor said.

"PFLAG asks that you keep the flag hanging in the school, it is a symbol of hope and safety," said a woman with a local PFLAG chapter.

"I believe the flag shows a lot of support for kids that do identify as LGBTQ and it shows there is hope and safety for them," one student tearfully told the board.

"In my opinion, the flag represents the hope of acceptance and equality and being able to not be scared for their safety," a 7th grade student said.

An 8th grade student told the board he attempted to present an opposing viewpoint to the pride flag with a petition, but had it taken away; he also claimed flags that represent him were removed from his locker by a teacher

"I feel my viewpoint has been suppressed by school administration and the teachers," the student said.

"We will file a lawsuit in federal district court to ensure that everybody's rights to have a say in what symbols go up in a public building they support with their tax dollars are recognized," said attorney Bill Mohrman, who told the board he has been retained by a group of Marshall residents opposed to the policies that allowed the pride flag to be displayed in the school. He and others at the meeting asked the district to adopt a "viewpoint neutral" policy toward flags in school.

Erick Kaardal, who works with Mohrman and has been working alongside him on the case said on Friday that this was a First Amendment issue.

"That's really bad because we want to have our students have First Amendment rights, there are a couple of things going on here--biggest concern here is that Minnesota's statute regarding anti-bullying and the school district's policy of anti-bullying, it appears that the critics of the rainbow flag are being case as bullies," Kaardal said.

Kaardal also pointed out that the school district lacks specific policy regarding expression within its walls.

"It has to be addressed in a fair way, just like in a public park, we allow every flag to be displayed if someone applies for a permit," Kaardal said. "You have to take turns but you get to fly your flag. But in school, if they're going to choose one flag, it should be the American flag. If they're going to have additional flags, they should have some policy regarding alternative viewpoints. It's called viewpoint neutrality."

Kaardal said his clients have handed him a petition that suggested two alternatives when it comes to flags that could be put up alongside the LGBTQIA flag.

"One being a U.S. Gadsden flag, and the second one is a flag with a mom and dad stick figure with a child in between," Kaardal said. "The point being that you have a viewpoint neutral approach."

The superintendent of Marshall schools said he was unable to comment due to threat of pending litigation.

School district attorney Kristi Hastings tells KARE 11 that the Marshall Board of Education will meet again in a closed session on March 2 "to consider strategy surrounding the threatened litigation."

RELATED: A colorful history: How did the rainbow flag become the banner of Pride?