The mayor and police chief held a news conference with other city leaders to announce a new plan for addressing violent crime and police accountability. 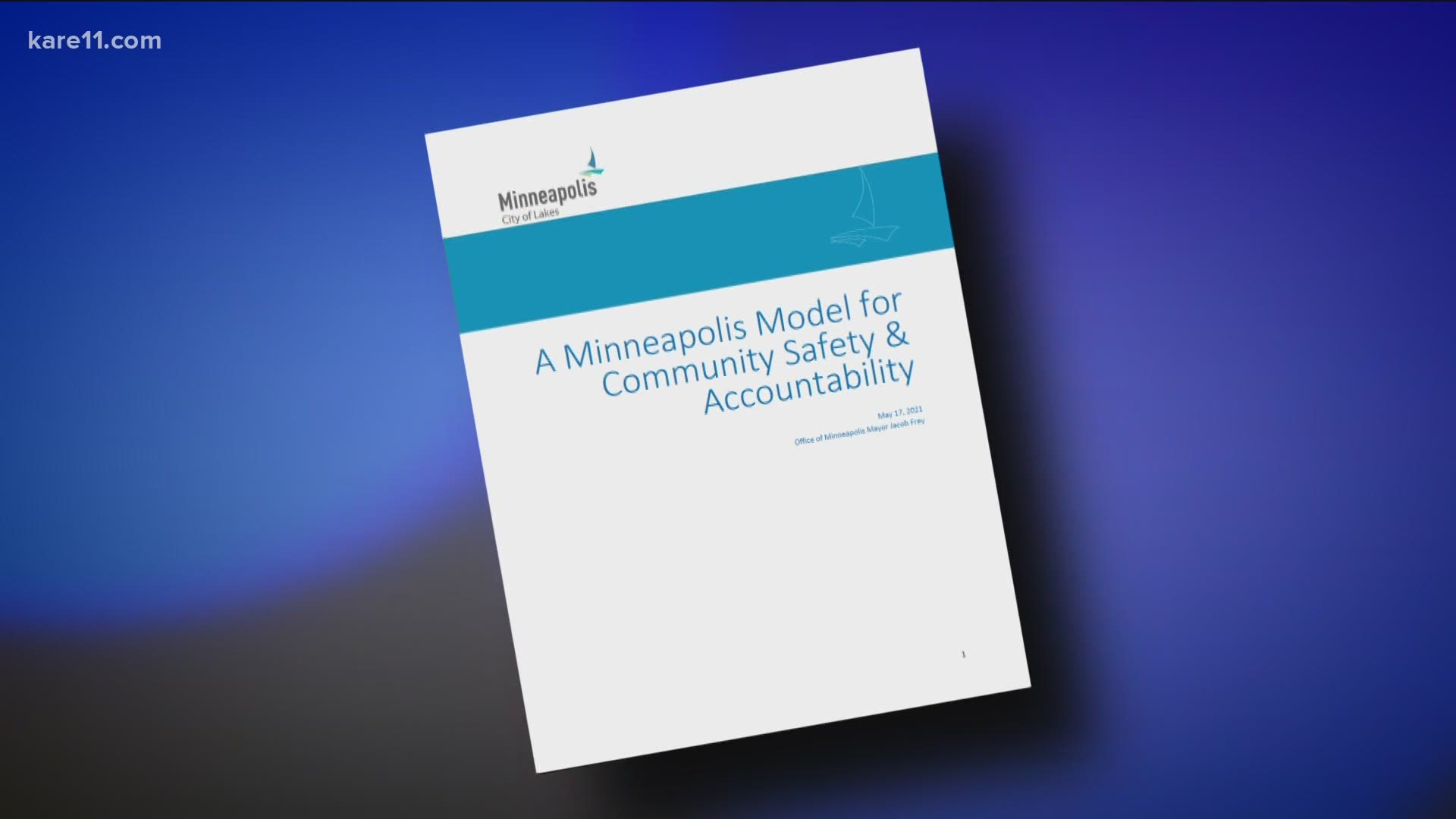 "It's been nearly a year since the murder of George Floyd and right now Minneapolis is at a crossroads," Frey said at the news conference. "What's clear is that right now our children's futures are at stake. Our children's lives are being cut short."

Frey announced a series of proposals that have been developed over several months with a focus on a "compassionate approach" to community safety.

According to Frey's office, the proposals address the current spike in violent crime, investment in prevention, intervention and enforcement strategies, and a commitment to "community-led work and deeper partnerships to address root causes of crime."

The mayor is proposing dedicating some federal American Rescue Plan funding to these new community safety initiatives, in addition to city dollars.

Frey addressed the ongoing gun violence in Minneapolis and said the "ultimate goal of this continued push" is to make sure every resident, from the north to the south side of the city, feels safe.

Frey said he believes in a "both-and" approach to public safety reform, and that the city needs police. He said Chief Arradondo is engaged on a "crackdown" on violent crime across the city.

The mayor said he's proposing a cross-jurisdictional task force to focus on crime prevention in "hot spots." He also said he will tap federal agencies like the district attorney's office, the FBI and the Bureau of Alcohol, Tobacco, Firearms and Explosives for help with violence prevention.

Frey said he wants to prioritize funding for Minneapolis Police Department overtime to ensure the department can "efficiently and safety increase its patrol presence." He's also proposing funding to add cameras in high-crime areas and add staff to review footage in real time.

"Gun violence is traumatizing our neighborhoods across our city, including and especially right here in north Minneapolis," he said.

Frey said 19 children have been struck by gunfire so far in 2021.

Chief Arradondo said while there are many divisive issues, everyone should be against intentional violence.

"Violence has to stop, that has no place in our city," he said. "Our children and our young people are not disposable. Their lives are valuable to us."

Arradondo said his department is operating with reduced staff and "cannot do it alone."

"A third of our department is no longer here," he said. "But for the men and women of the Minneapolis Police Department that continue to show up day and night, they deserve our thanks and gratitude."

"For any community members that would dare try to harm them because they're trying to save lives," he said, "We will charge you to the fullest extent of the law."

Arradondo said some of the people who are being arrested for firing multiple gunshots have no or very little criminal history. He said he is asking judges to "reexamine" the leniency they give to first-time offenders in these types of situations.

The mayor also announced policy and training changes for the Minneapolis Police Department with the goal of "shifting the culture and instilling accountability."

He said the city is pursuing new trainings that will prioritize de-escalation and peer intervention. Frey and the chief are working with the city attorney toward making sure hanging objects and expired tags are not primary reasons to pull people over.

Frey and Arradondo are beginning to build a Force Investigation Team to investigate "significant use of force incidents" in MPD.

They are also working with the city's human resources department to establish different recruitment standards for police, "with an emphasis on Minneapolis residency and social services."

"This is not the end of the work," Frey said. "We're standing here with a very clear message. And that message is that the status quo cannot prevail. Every willing partner is invited to join us."

Sondra Samuels of the Northside Achievement Zone condemned the "rhetoric" around defunding the police, and said the city needs a "both-and" approach.

"We need a fully staffed police department and a transformed police department that also has services and supports that the mayor talked about for our citizens," she said. "The north side has more children than any other neighborhood in Minneapolis."

Samuels emphasized that the north side of the city needs police to protect them from the rising gun violence.

"I want to thank all of the police officers who are not Officer Chauvin," she said.

Pastor Jalilia Abdul-Brown of Shiloh Temple told the crowd that she has not seen this level of violence against women and children in Minneapolis before.

“Something has to give, and if we want to see change, we are going to have to make change together,” she said. "One person can start a movement, but it takes a community to make change."

Frey acknowledged at Monday's news conference that there is disagreement in the city council around the issue of police reform.

"I'm hopeful that this is an area where we can unite around a common vision," he said.