Minneapolis woman cycles topless to raise awareness that it's legal

Helena Howard says it's legal on non-Minneapolis Park Board roads and that women should be able to go topless on a hot day. 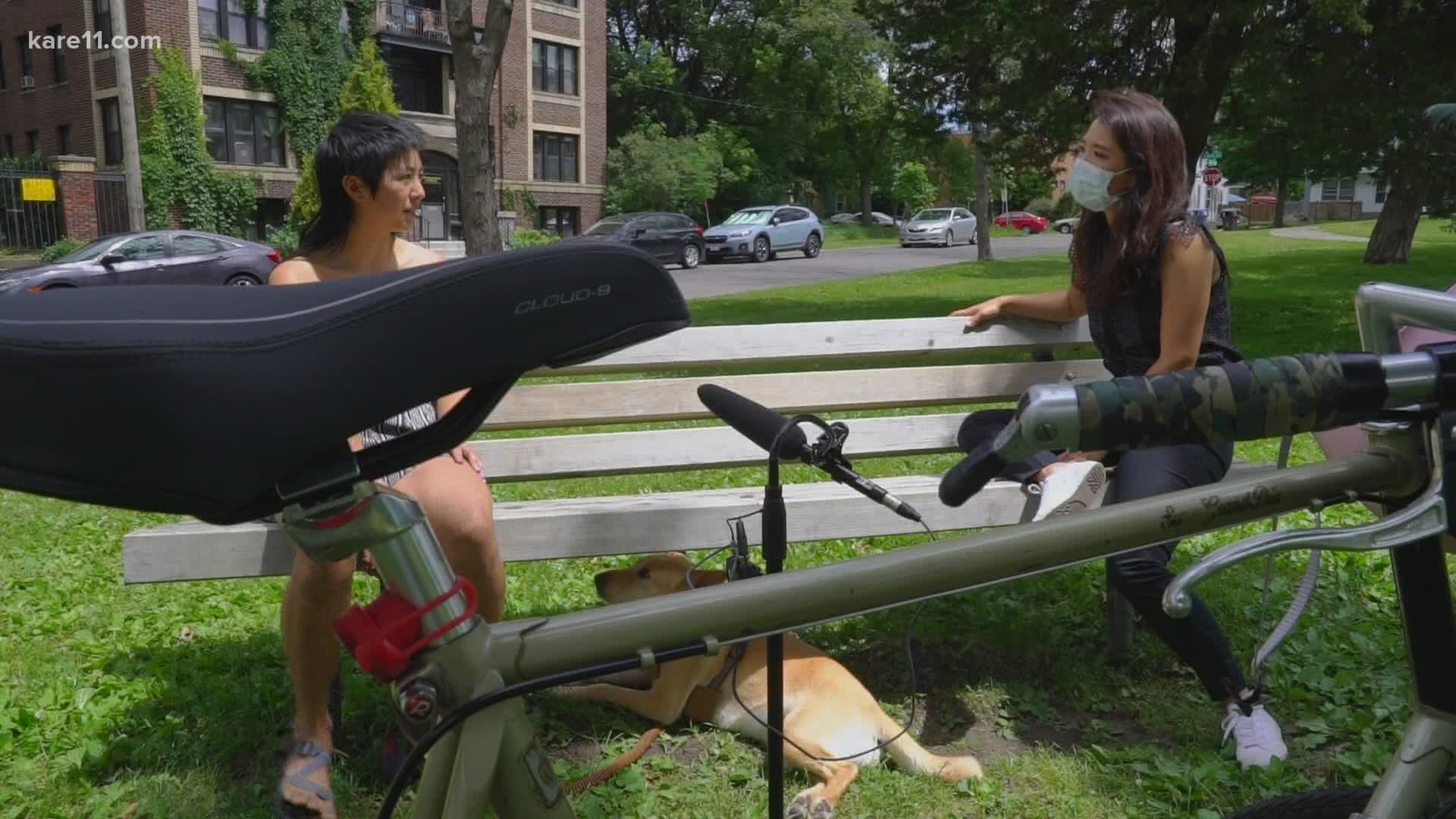 MINNEAPOLIS — When planning a bike ride, a helmet is a must. Sometimes Helena Howard brings her adorable pup, Grazie, along too. All else for them is optional though, including a shirt.

"I think it's pretty silly," Howard said. "They're just nipples."

Howard has been biking topless for a while now.

"It's hot out and men can do it so why shouldn't everyone be able to do it?" she said. When asked if she has gotten negative feedback, she said, "a little bit. I think mostly positive or just kind of curious comments but there has been some cat-calling or rude comments."

Howard said her curiosity about what the state allowed in terms of her being topless was triggered when she was cited for being topless on a beach about two years ago.

"I was on my stomach, my partner was on his back," she said. "And the police came on a routine check of the beach, they walked past me and came around again and told me that I needed to put a shirt on. Took my ID and gave me a citation for being topless in a Minneapolis park."

The Minneapolis Park Board ordinance states, "No person ten (10) years of age or older shall intentionally expose his or her own genitals, pubic area, buttocks or female breast below the top of the areola, with less than a fully opaque covering in or upon any park or parkway..."

However, Howard, in her research to fight the citation, found that the state of Minnesota doesn't say it's illegal for a female to be topless. The State Statute just defines indecent exposure as "engag(ing) in any open or gross lewdness or lascivious behavior, or any public indecency other than behavior specified in this subdivision."

Knowing this, Howard said she hit the road on her bike staying just a few feet away from parks and parkways where she still could be cited.

"I was also nervous about what other people would do but didn't really get any comments," Howard said, referring to her first topless bike ride ever. "Got some people looking or taking pictures but after that I started biking by myself. I felt safe for the most part."

Since that first ride, Howard said she takes full advantage of the sun on hot days. She is also encouraging others to give it a shot, if they're curious.

"I just want people to know that it's legal and also make people think about why it's weird to them or why they think it's not acceptable," she said. "I don't think it's all that different from a man being topless. I also want to fight the sexualization of breasts and female bodies. I think it would be a safer place if female bodies could just exist without being objectified."

Howard said she is organizing a group topless ride this Sunday at 6:30 p.m. She said all are invited to meet her and join her at the Recovery Bike Shop in Northeast Minneapolis. If you have questions or want to get in touch with her, she said she can be reached at hmlhoward@gmail.com.