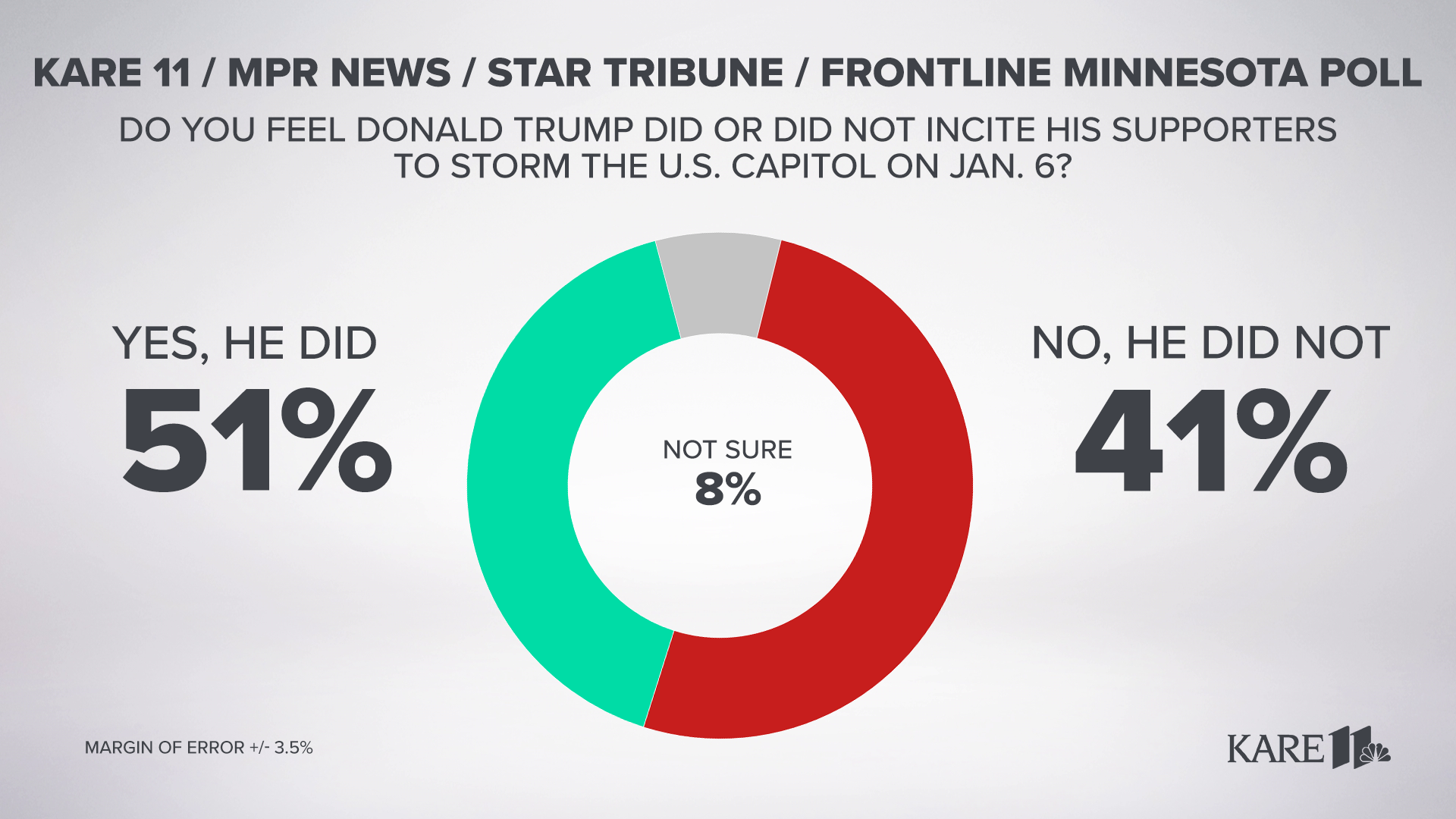 On Jan. 6, 2021, little more than two months after Election Day, supporters of President Donald Trump marched from their rally on the National Mall in Washington, D.C.to the U.S. Capitol. Soon afterwards, a massive pro-Trump crowd violently stormed the building while lawmakers were inside certifying Joe Biden's victory in the 2020 presidential election.

According to a new poll, most Minnesotans believe Biden legitimately won the 2020 election, while about a quarter of voters still believe he did not.

A majority of Minnesotans believe that Joe Biden legitimately won the 2020 presidential election, according to the survey. Sixty percent of voters said they believe Biden won, 26% don't believe his win was legitimate, and 14% of voters aren't sure.

Most demographics polled agreed that Biden won the election, though the strongest endorsements came from voters in Hennepin County and Ramsey County, female voters and Democrats.

Not surprising, nearly all Democrats polled said they believe Biden is the legitimate winner of last year's election: 96% said "yes, he did win," with just 4% saying he didn't. Nearly a quarter of Republican voters still believe the election results are legitimate (24%), though 47% say Biden didn't win and another 29% aren't sure.

DID DONALD TRUMP INCITE SUPPORTERS TO STORM THE U.S. CAPITOL

Minnesota voters are generally divided over whether or not Donald Trump incited his supporters to storm the Capitol building on Jan. 6, with 51% of those polled saying he did and 41% saying he didn't.

Republican and Democratic voters were extremely polarized on this question, with 78% of GOP voters saying Trump did not incite his supporters compared to just 2% of Democratic voters. Fifty percent of Independents agreed Trump was not responsible for inciting the Capitol riot.

Finally, voters were asked to describe how they felt about the events of Jan. 6: Was it an insurrection with the primary purpose of overturning the results of the 2020 presidential election, or was it a legitimate demonstration that turned violent due to the actions of a small group of extremists?

Statewide, voters didn't lean strongly one way or the other on this question. The results were nearly split: 46% said it was an insurrection, and 42% said it was a legitimate gathering while 12% weren't sure how they felt.

Independents were split, with 44% calling the event an insurrection, and 45% describing it as a legit demonstration.

KARE 11's John Croman reached out to a number of poll takers falling along varying degrees of the political spectrum. Those who responded include two self-describing Republicans, and two Independents who each voted for Biden in the 2020 Election.

While both Independents and one Republican believe Biden won the election, self-described Republican Daniel Ortwegg expressed some amount of skepticism. "When people talk about corruption and/or funny things happening in the election, it doesn’t have to be nationwide. It only has to be specific counties in specific states," he said. "I’m not saying that happened because I don’t have time to research all that stuff. But, 44,000 votes in four to five different states at least raises the question, okay? And I think there’s been enough questions to be raised that people should really investigate it."

Democratic-leaning Independent Nancy Weisheim said, "He legitimately won. I don’t even know why people would say [he didn't]...I don’t, I don’t question the system. I don’t question it. There are so many checks and balances in place for a reason, and we just have to trust...I’ve said, a year before the election President [Trump] was not going to go easy. He was going to have to be carried out there kicking and screaming. We were close to that!"

Referencing a lack of fraud, Independent Paul Goosens of Duluth said, "You look around the states and the voting and how it was done, and all the, all the, the weird universe of the lie and everything else, what they put forward and everything else...[Biden's] our president. He won the election. Former President [Trump] just having a big dangerous temper tantrum about ‘I want to stay in power. I want more power.' And that really was scary."

Asked whether the events at the U.S. Capitol on Jan. 6 constituted a legitimate demonstration, Republican Sally Oden said, "Well it was an insurrection. I think that probably says it best...I think the election was the motivation that got it started. I think that’s probably the biggest reason. I mean I guess they might have wanted to overthrow the government, but that’s a little weird, because there weren’t that many of them, but it was wrong."

Independent Paul Goosens disagreed. "It was insurrection. I don’t know how you can label it anything else, and not be very inaccurate," he said. "It was about maintaining power, and staying in power. The thing that frightens me about that is, okay, if they would’ve overturned [the] electoral college vote and all that, what next? What would’ve happened next? What does that do to our Constitution, our democr—I mean, that was really scary, it was an insurrection."

Democratic-leaning independent Nancy Weisheim had a more mixed opinion. "I think it started out calm, but...if I go to a demonstration and I look to the left and I look to my right and I see these people in riot gear, you, demonstrators in riot gear, this ain’t gonna end nice. Get out of dodge now! And that’s what a lot of people should’ve done. It just got out of control too quickly, too quickly."

DID DONALD TRUMP INCITE SUPPORTERS TO STORM THE U.S. CAPITOL?

Asked whether former President Donald Trump incited his supporters to storm the U.S. Capitol, Republican Sally Oden said, "I think he definitely did. Based on the news report. I don’t know that he started it, but he sure encouraged it."

Republican Daniel Orteg disagreed. "He clearly said go forth and peacefully protest. What could be more clear than that? I’ll admit that leading up to that particular day he had been touting what he believed, and I believe, was the improprieties of the election and people were a little bit, uh, uh, ginned up...I don’t know where do you draw the line on, on what somebody’s speech is and how other people react to it... I don’t think that he instigated quote-unquote, an insurrection."

"He certainly didn’t do too much to stop it. You know, I think he could’ve done more. He didn’t... I think that was four years in the making," said Democratic-leaning independent Nancy Weisheim. "I don’t think it happened on that one day. He had been grooming his group of people for four years...These people were groomed. I don’t even want to use the word brainwashed, but close to it."