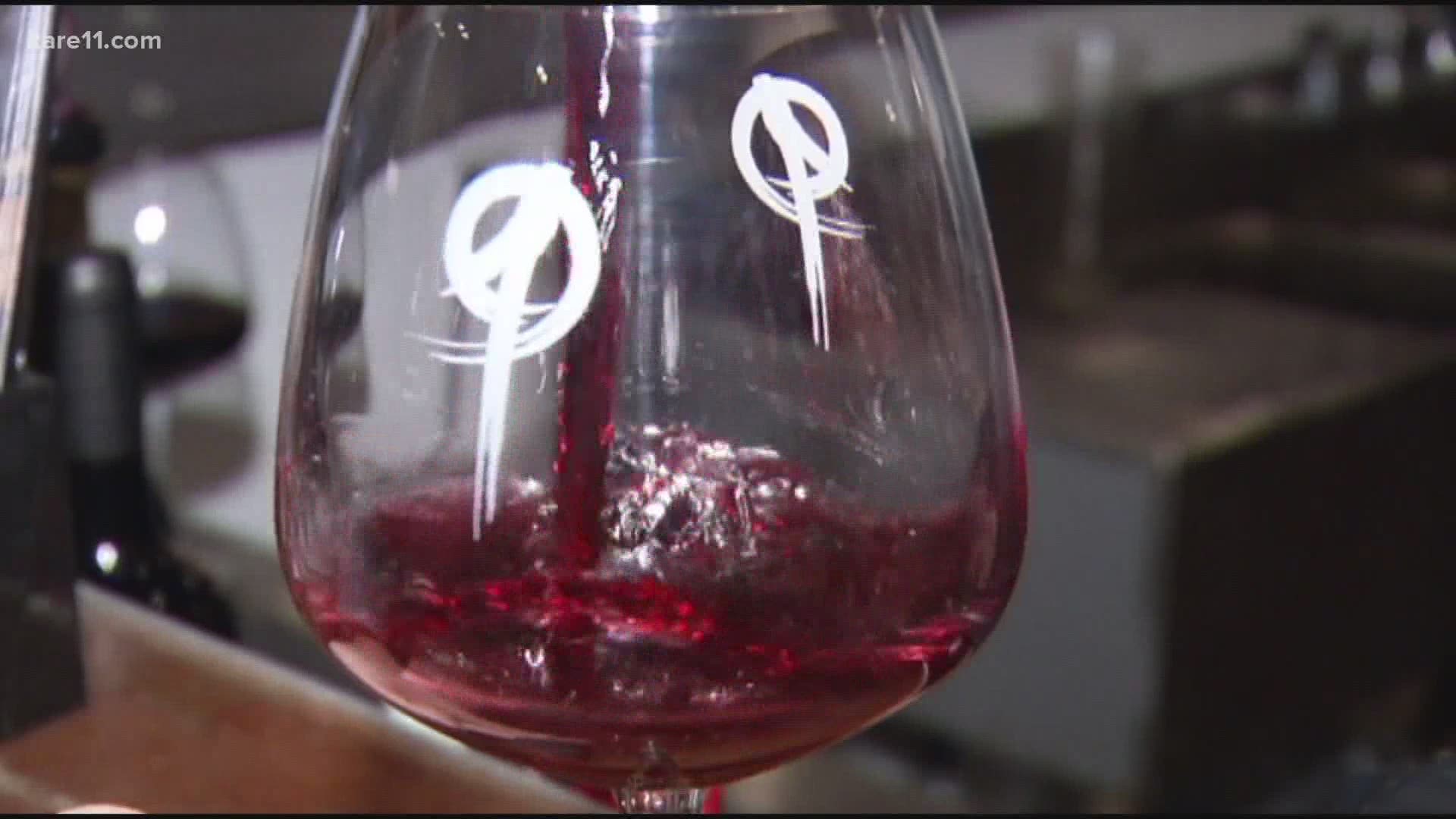 When you open a bottle of wine, do you think about where it came from?

How it was made?

What kind of grapes they used, or how it was blended?

For most people, no, they just enjoy it.

But for Nan Bailly, a 2nd generation winemaker, it's everything.

She owns Alexis Bailly Vineyards in Hastings and for her, the thought of someone telling her she can’t use a certain grape, or buy from a certain source, is like telling a painter they can’t use certain colors.

Basically, the rule says more than half of the wine a winemaker produces each year must be made from Minnesota grapes.

Winemakers who wish to obtain a “Farm Winery” license in Minnesota must follow this rule.

“The idea of the 51% mandate was to support local agriculture,” Bailly says.

“We’re an agricultural state and so mandating that Minnesota wineries had to grow Minnesota grapes was the point of it.”

Not only does the mandate support local agriculture, but Bailly says it also supports the University of Minnesota’s grape breeding program.

Over the years the university’s cold hardy grape breeding program has developed nearly a dozen commercially viable grapes that are now being grown in Vineyards across the country.

Some of these varieties include Frontenac, La Crescent and the newest grape, Itasca.

Bailly herself grows 13 acres of grapes on her property, including many of these U of M varieties.

She says the wine that’s made from these grapes is good quality wine, but nearly every year the frost and cold weather takes a large portion of her crop.

“The growing season is pretty short here in Minnesota, so we also see a lot of grapes that are very high in acid or haven’t had enough time to fully ripen,” Bailly says.

Most winemakers can salvage their crops by blending wine from other regions, like California, Oregon, Washington and New York, but Bailly says the process is very time consuming.

And after so many years of dealing with that paperwork, Bailly and a fellow winemaker decided to sue the state of Minnesota.

And this week a federal court judge ruled in their favor, stating the "51% rule" violates the U.S. Constitution's Interstate Commerce Clause.

The Department of Public Safety's Alcohol and Gambling Enforcement Division says the change will go into effect immediately.

Minnesota Farm Wineries are no longer required to follow the “51% rule.”

In a statement the agency said, “We're disappointed in the ruling, but will respect the court's decision.”

"What I hope it will do is change the industry in the future for people who want to get into the wine industry,” Bailly says.

While Bailly is happy with the decision, Jenny Ellenbecker with the Minnesota Grape Growers Association says the change will also be devastating for some local growers.

"For the vineyards, this will be most likely reduce the value of their grapes. There will be less vineyards in Minnesota, there will also be less new vineyards popping up in Minnesota in the future," Ellenbecker says.

That's because the “51% rule” was helping a lot of Minnesota growers compete with the bigger growers on the west and east coasts.

Without that help Ellenbecker worries many mom and pop vineyards will simply go out of business.

Ellenbecker herself is caught in the middle of this debate.

On one hand, she represents dozens of growers across the state.

On the other hand, she’s a grape her and winemaker herself.

She owns Round Lake Vineyards and Winery and says the change both help and hurt her business operation.

“I’m just a few miles from the Iowa border and so it will be easy for me to just run over and source grapes from them,” Ellenbecker says.

Not every winemaker however is happy with the decision.

Ellenbecker says there are 91 wineries in Minnesota and the law change will affect every one of them differently.

"It just depends on the certain business plan of that winery," Ellenbecker says. “Some use 100% Minnesota grapes and they will likely keep doing the same thing. Others may change after this law, who knows.”

Bailly says not much will change on her end.

She'll still make the same wine she did before, only now she'll have less paperwork to file and less red tape if she decides to try something different.

"It's not like the floodgates are going to open and all of these wineries are just going to make wines from California fruit. I believe that we are proud Minnesota winemakers,” Bailly explains.

And now to the big question, how will all of this affect you, the consumer?

Well, winemakers say the law change could lower the prices of certain types of wine, because there will be more competition.

But mostly we'll just see more wine to choose from, with winemakers free to experiment and try new things.

There is a concern that with this change we might lose some of our Midwest identity, that some of those grape varieties that were developed by the U of M will just go away.

Ellenbecker says those types of grapes are also grown in states like Iowa, Wisconsin and Michigan, so they'll still be around, we just probably won't see as much of those grapes being grown here in Minnesota.