The KARE 11/MPR News/Star Tribune/FRONTLINE Minnesota Poll found a large majority of Minnesota voters say they have been vaccinated against COVID-19. 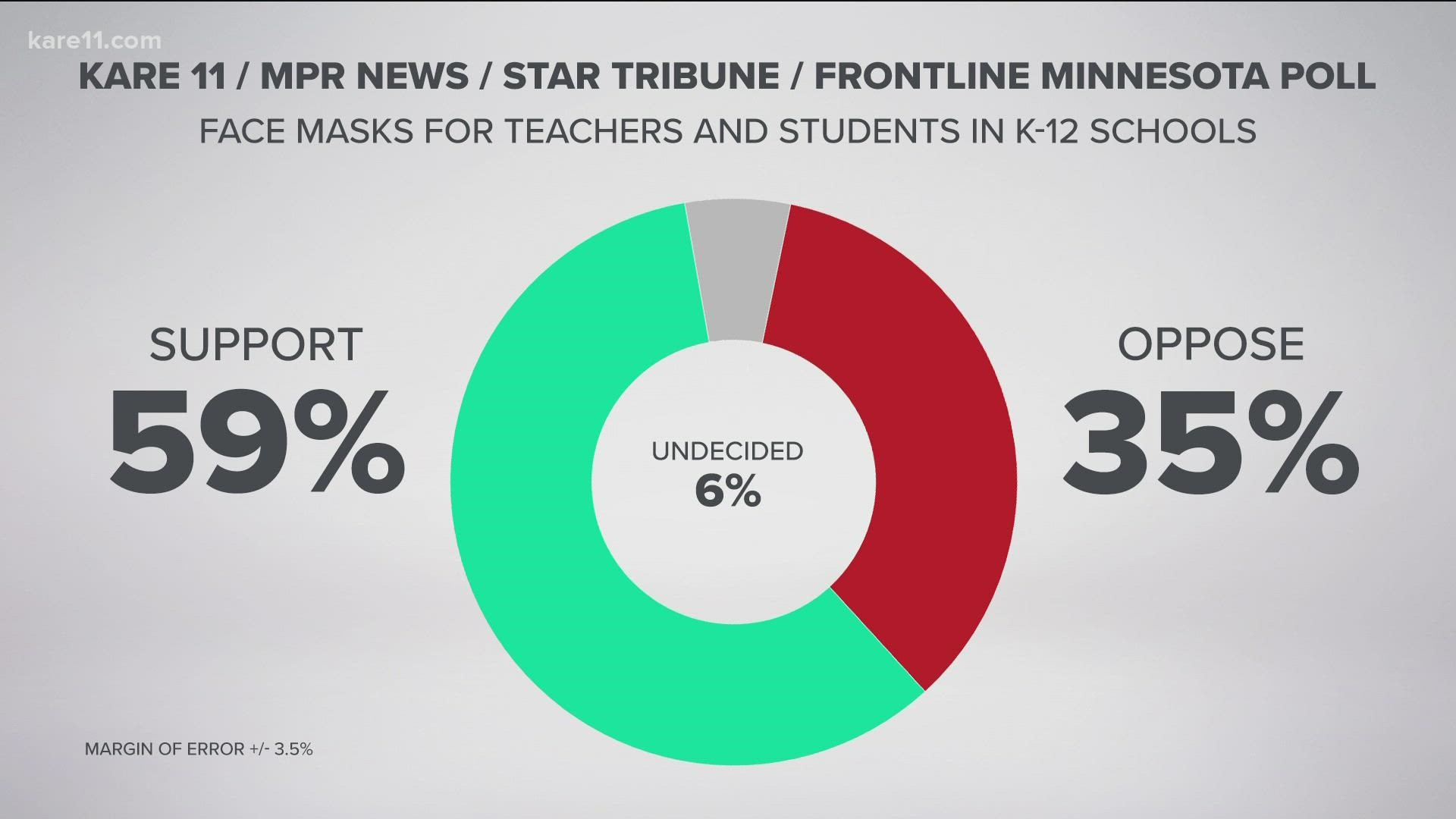 MINNESOTA, USA — Minnesota voters have varying views on vaccine requirements, but a majority are in support of mask usage in schools, according to the results of a new KARE 11/MPR News/Star Tribune/FRONTLINE Minnesota Poll.

The Minnesota Poll found 80% of those surveyed said they've personally received at least one dose of a coronavirus vaccine, compared to 18% who said they have not, and 2% who did not answer.

The 80% who reported being vaccinated is slightly higher than current CDC data for Minnesotans age 18 or older. The CDC reported a 75.9% vaccination rate for Minnesota as of Sept. 17.

The poll found a majority of Minnesotans have been vaccinated across all demographic groups, with more women saying they've been vaccinated (84%) than men (75%). Vaccinations were also relatively even across age groups with poll participants over the age of 65 reporting the highest percentage of vaccinations (83%) when compared to people 18-34 (82%), 35-49 (80%) or 50-64 (75%).

More pronounced political divisions were found when pollsters asked about restrictions put into place to prevent the spread of the coronavirus.

"But there's such a hesitancy to put any restrictions in place now because there’s such a backlash that has occurred over the last year. I really felt like we did a nice job, we were getting on top of things, and then this year, I think there's more that we can do."

The poll found somewhat mixed results when respondents were asked about a variety of hypothetical vaccine requirements.

Women were more likely to support vaccine requirements at large events (62%) than men (34%), and Democrats were overwhelmingly in support (84%) when compared to Republicans (14%) and independents (43%).

Poll respondents were less supportive of a hypothetical vaccine requirement for bars and restaurants, with just 44% in support and 50% opposed.

VACCINES TO RETURN TO WORK

The Minnesota Poll found 43% of those surveyed support vaccine requirements to return to the workplace, compared to 49% in opposition.

Support for this hypothetical requirement was still in a majority for women (56%) and Democrats (77%), but slipped slightly compared to the other questions.

The poll found a majority of Minnesotans would support mask requirements for teachers and students in K-12 schools. Fifty-nine percent of those polled said they support masks in schools, with 35% opposed and 6% undecided.

Masks had majority support across the state, with the highest numbers once again in Hennepin and Ramsey counties (71%), followed by 54% support in the metro suburbs, 58% support in southern Minnesota, and 50% support in northern Minnesota (with 42% opposed in that region, and 8% undecided).

Women were highly supportive of masks in schools (72%) while men were split virtually down the middle (46% support, 47% oppose).

Democrats overwhelmingly support mandated masks in schools in the poll (92% vs. 4% opposed) while a majority of Republicans opposed the idea (32% in support, 61% opposed). Independents were evenly split at 47% in support and in opposition. 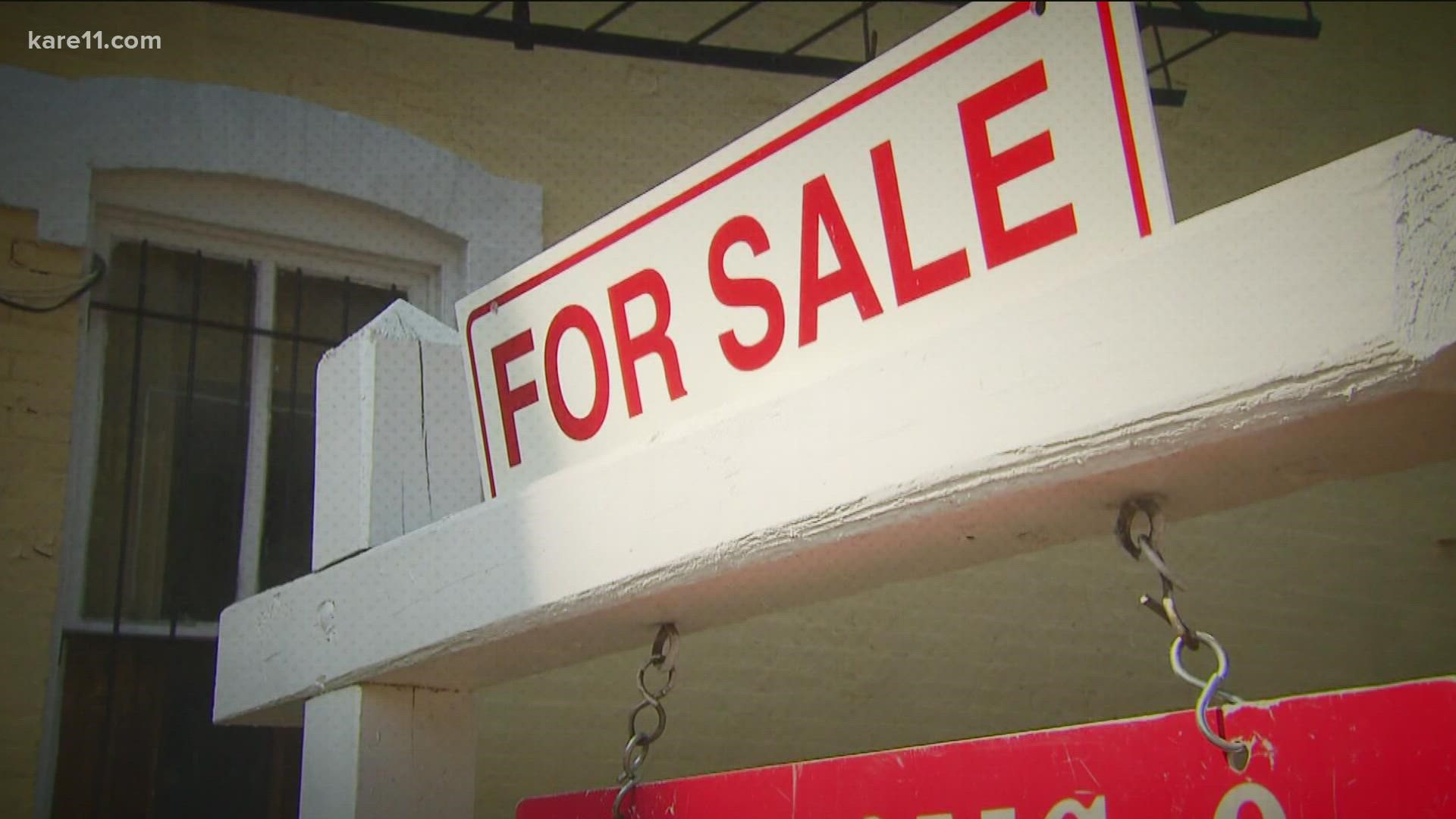