"If I knew this would happen, I never would have become a cop," Noor said. 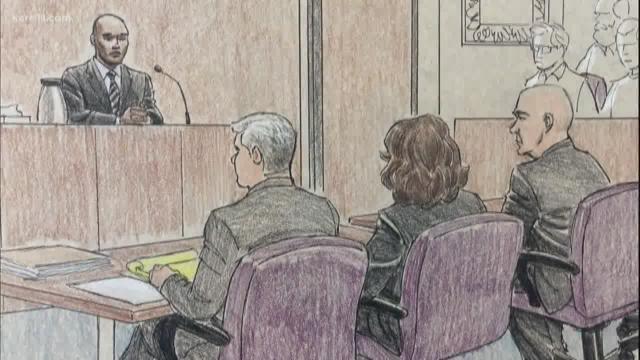 MINNEAPOLIS — Former Minneapolis police officer Mohamed Noor has taken the stand in his own murder trial over the shooting death of Justine Ruszczyk Damond.

Mohamed Noor testified that while stopped at the end of the alley he saw a bicyclist, "Soon as the cyclist comes to a stop, I hear a loud bang on the driver's side. Soon as I hear it, my partner yells, 'Oh Jesus' while he went for his gun," Noor testified Thursday afternoon.

"He turned to me with fear in his eyes. His gun appeared caught in his holster," Noor said.

Defense attorney Tom Plunkett asked, "How did you know?"

"I saw a female in a pink shirt with blonde hair raise her right arm. I fired one shot. And the threat was gone,"  said Noor.

Plunkett:  "What was the significance of raising arm?"

Noor: "She could have had a weapon, sir."

Plunkett: "Why didn't you wait?"

Noor: "My partner would have been dead."

Noor said he did not know that Justine was not a threat until he came around the side of the police SUV and his partner told him to holster his weapon.

Why did he fire?

"My intent was to stop the threat," Noor said, adding he believed his partner's life was in danger.

What did he think when realized she wasn't armed?

When he heard the "bang" himself, Noor said he didn't fear for his life. When did he fear for life?

Plunkett: "Why did you put your hand on his chest?"

Noor: "To protect him from my weapon."

Noor later said he was extended all the way over the steering wheel when he shot.

He did appear more distressed when he was asked about if he regretted becoming a cop.

"If I knew this would happen, I never would have become a cop," Noor said.

It was difficult to tell if tears were falling.

In cross examination, prosecutor Amy Sweasy seized on Noor's admission that he knew he was shooting a person and that the shot would likely kill the person, likely seeing that fact as important in proving the charge of second-degree murder.

"I had to make a split-second decision," Noor said.

Sweasy also seized on Noor's requent reference to Ruszczyk as "the threat."

"I fired once. The threat took a couple steps back..." Noor said.

"Did you just say 'the threat' took a couple steps back?" Sweasy asked. "THe whole blonde hair, pink t-shirt is a threat to you?"

"I've worked with my partner long enough to know he feared for his life," Noor said.

"Does 'Oh Jesus' automatically mean 'I fear for my life?" Sweasy asked.

Noor said coupled with how Harrity reacted, reaching for his gun, Noor thought so.

RELATED: A timeline in the fatal shooting of Justine Ruszczyk Damond

Noor's testimony began at 1 p.m. with defense attorney Tom Plunkett started going over Noor's life story with him, which the jury first heard in Opening Statements.

Noor is the oldest of 10 siblings. He was born in Somalia, fled to Kenya with his family at age 5, then came to America when he was 7. He reached Minnesota in the 7th grade, and Noor testified, "When I moved here, no one liked Somalis."

Noor became an American citizen in 1999. His parents gained citizenship and he said that automatically applied to him and his siblings too. After going through his schooling, Noor got to the part where he started Police Cadet Academy.

It was "very stressful," Noor testified. Twenty-nine weeks of classes and physical training. "Very demanding. It requires a lot of learning." Then he began talking about his firearms training.

Defense attorney Plunkett proactively had Noor talk about something the prosecution wanted to raise - an incident when he improperly pointed a loaded gun. Noor described he unloaded the weapon in reverse - the chambered round before the magazine which chambered another round.

Noor says when he stepped back with a loaded weapon, he got in trouble but learned from it. "That was in a safe training environment with my instructor behind me," Noor said. He said some other cadets "shot the floor, shot the ceiling, shot the carpet," so mistakes weren't uncommon.

Noor then talked about his officer-involved shooting training where he learned how it affects perception of officers. And what he learned about officers at the scene of an officer-involved shooting, Noor said they can't talk to the officer who shot. "You can get days off, up to termination if you talk to an officer involved at the scene or attempt to interview him," Noor testified.

Then they spent time on Noor's counter-ambush training. Noor said, "The most important take for me was actions are better than reactions. If reacting, that means it's too late." Plunkett said, "What happens?" Noor replied, "You die."

Then Noor got choked up talking about a counter-ambush training relating to MPD Officer Jerry Haaf, who was killed in 1992. Noor was holding back tears talking about a scenario at a restaurant where you learn to trust your partner to protect you.

Then on counter-ambush training in a patrol car, Noor said, "As long as your partner is safe, you can shoot out of the squad car in any direction. The key takeaway is saving your partner's life in a safe manner."

Before the defense began their case, the prosecution rested theirs at about 12:30 p.m. on Thursday, after weeks of testimony.

The prosecution wrapped its case over the last couple of days by turning to its own "use of force" experts. Thursday they ended with their second expert, Tim Longo, the former police chief for Charlottesville and Baltimore.

Wednesday prosecutors brought Lt. Derrick Hacker of the Crystal Police Department to the stand. Hacker is head of investigations for his department, a use of force instructor and head of the West Metro SWAT Team. He also earned national attention as a key investigator in the murder of a child named Barway Collins several years ago.

When asked by prosecutors Patrick Lofton, Hacker told jurors it was his opinion that "the use of force (by then-officer Noor when he fatally shot Justine Justine Ruszczyk Damond) was use of deadly force was excessive, objectively unreasonable, and violated police policies and training."

After Hacker, prosecutors began interviewing Tim Longo, the former police chief for Charlottesville and Baltimore. He remained on the stand as of Thursday morning.

Defense attorney Tom Plunkett began his case Thursday, before Noor took the stand, by making a motion for a "directed verdict," which is asking the judge to acquit. She denied it, saying that there's enough evidence for all three charges against Noor to stand, and for the jury to make a final decision. Although this type of motion is often made, there is a very high standard for acquittal.

Lou Raguse is in the courtroom and will be posting updates on Twitter.