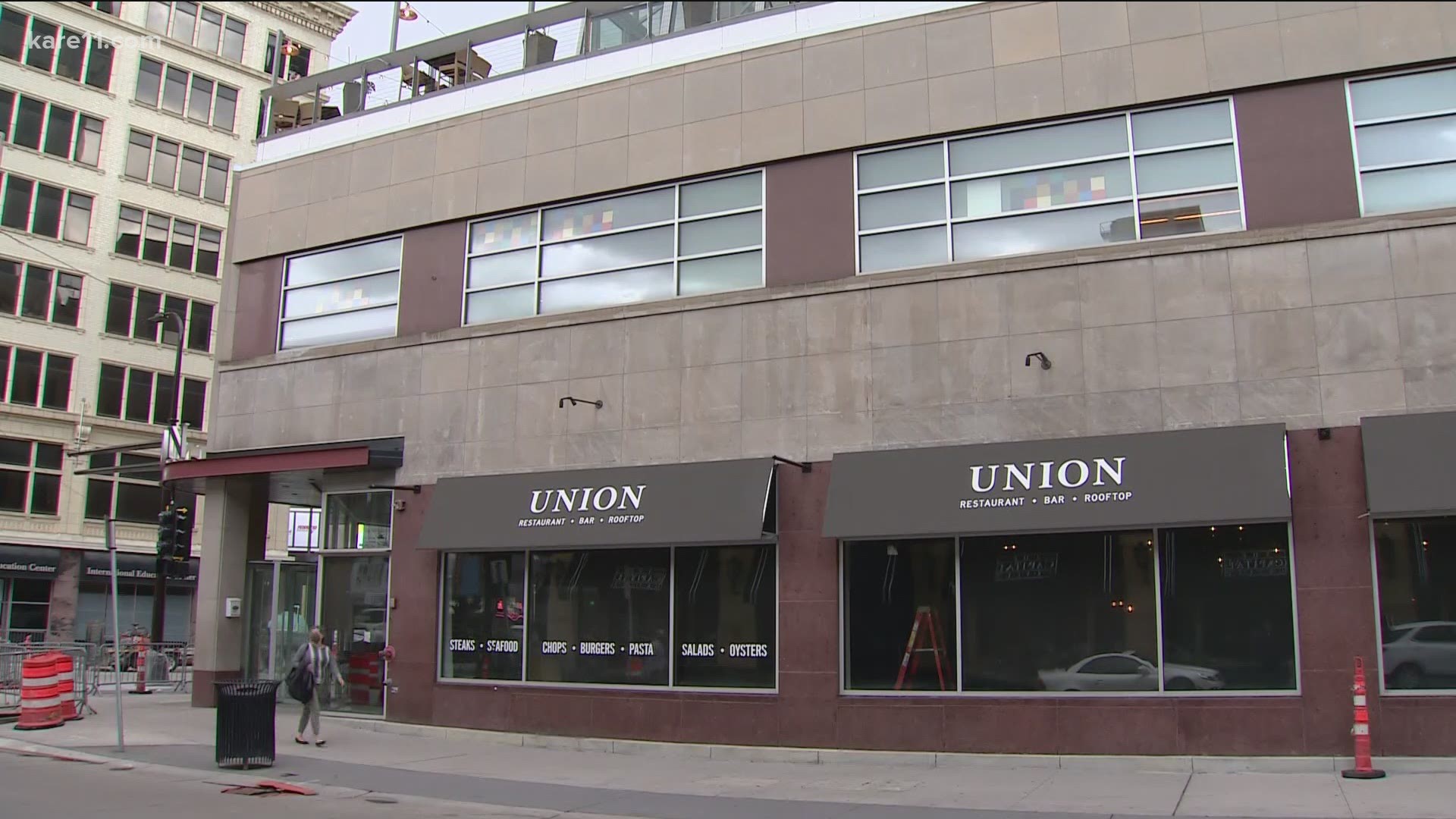 MINNEAPOLIS — Business owners in downtown Minneapolis are rallying together, calling on city leaders for more support when it comes to public safety in the area.

"The people aren't coming because they're afraid," said Tanya Spaulding, who lives and works downtown.

The Union Rooftop in downtown Minneapolis, once a bustling hot spot for townies and groupies, now sits vacant with empty table tops and dying vegetation.

It's a sign of the times for the area amid a global pandemic, met with an uptick in crime, which some believe is keeping people away, considering there's safety in numbers.

Spaulding is a Principal and Partner at Shea Design, serving as a representative for more than 40 business owners who recently submitted a letter to the mayor's office and city council asking for a plan of action.

"We need your help, can you unify with us, can we be proactive in dealing with this, can we get the people back downtown into our businesses and can we do it safely," asked Spaulding.

At the rate things are going, some say downtown is like free for all.

"Last weekend someone drinking from a bottle of wine on the patio, chased the guy out the next day he's back in stealing from the bar," said Eli Fhima, Co-owner of the Fhima Restaurant in downtown Minneapolis.

"You're getting harassed or yelled at, or there's a fight in front of you, there's a bit of trepidation and you don't see anyone dealing with it right now," said Spaulding.

Which is why some businesses are already calling it quits...

"Some that people don't even know about yet, and some that are questioning their future," said Spaulding.

This is the last thing these remaining business owners want to see happen to an area once bustling and thriving.

"If we don't deal with it now, the longer it goes on and the more our city is quiet and the more our city has a perception of crime it could take years even decades to bring it back to what it once was," said Spaulding. She went on to say, "“we want to bring the people in the first ring suburbs and in different neighborhoods of Minneapolis and the suburbs overall back to some of their favorite restaurants in downtown.”

A spokesperson for Minneapolis Mayor Jacob Frey sent us the following statement in response:

“Over the last several months, Mayor Frey has worked with Chief Arradondo and taken decisive steps toward meaningful reforms and strengthening public safety throughout our city.

“The mayor and chief have enhanced accountability on critical incident scenes, put in place new policy measures to emphasize de-escalation, and overhauled the department’s use of force policy. At the same time, every Minneapolis resident and worker deserves to feel safe in our city. That’s why they’ve made the difficult but necessary decision to reallocate resources within the department, reassigning over 90 active officers to 911 response and investigative work.

“Both are committed to working with any and all partners willing to commit to doing the hard work of creating safer, healthier communities and moving our city forward.”

Here is the letter sent from more than 40 small-business owners to to Minneapolis leaders:

We are a group of more than 40 small-business owners and leaders in Downtown Minneapolis—the heart of your city—with a concentration in restaurants. And we are in a state of desolation.

It’s not just because of COVID. When it comes to this virus, businesses have built a weary resilience with a sense of optimism: There are plans to be followed, protective measures in place, and an eventual light at the end of the tunnel.  The caveat is that we need you, the government, to help to get the people back downtown and to their offices (we’re looking at you, Governor Walz).   We need you to allow dining at bars again, Mayor Frey, without penalizing the whole for the actions of the few, so that restaurants can choose how to weather this storm and come out in one—albeit damaged—piece.

But this goes beyond COVID.  There is no current plan of action, cure, or sense of “We’re all in this together” for the other worries plaguing downtown, specifically, the real and perceived rising rates of crime.

Even those who refuse to let fear run their lives, even those who live in the city and have spent years feeling relatively safe despite the occasional incident, are turning away. The numbers speak for themselves, and the vibrations throughout Minneapolis can’t be ignored: Perception begets reality, and the strong feelings of unsafety in our downtown are very real. No matter which side of the “defund the police” debate you fall on, the absence of communication and transparency about public safety plans creates even more fear, uncertainty and frustration.

Our business are struggling. Some are failing; several have already closed. Many others have been boarded up for months, yet continue to be hit with rent and property taxes. Our patrons are paying entertainment and stadium taxes, even with no events or activity. We are still supporting the city, but the city is not supporting us. If this trend continues, a city can take decades of work and a major movement to recover. History has proven it, and we need to reverse course before we become a lost city.

It’s exciting and encouraging to see more companies signing leases downtown, but behind the scenes, a large number of businesses are considering or are already moving outside of the city.  Losing us puts at risk the very infrastructure that energizes and makes an urban environment compelling. It’s becoming too easy to celebrate in the good news while turning a blind eye to the bad.

We are asking you to stand up, take action, help us fight, and help us be part of the city’s future to make this city vibrant again before it’s too late. We need the people back, and we need to ensure their safety.

Please let us know your plan.

Group Description: More than 40 downtown Minneapolis small-businesses, concentrating on restaurants. An alliance of businesses formed to create a collective voice, developing initiatives designed to make our city safer and help our operations survive.

Why: Our employees and patrons feel unsafe in downtown Minneapolis. Crime has increased, and there is a general perception of lawlessness in the city’s core. COVID dealt small businesses a blow, but the downtown safety issues are just as formidable and, after stacking up for several years, have come to a head.