Some recent complaints about a flock of wild turkeys in northeast Minneapolis prompted a petition with more than 500 signatures to "Save the Wild Turkeys." 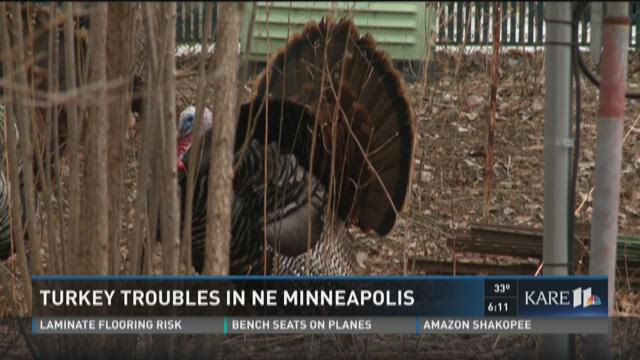 MINNEAPOLIS -- Some recent complaints about a flock of wild turkeys in northeast Minneapolis prompted a petition with more than 500 signatures to "Save the Wild Turkeys."

For many years, the turkeys have been a sort of unofficial mascot for the Nordeast neighborhood.

The birds frequently roost at Lowry Grove--a mobile home park in St. Anthony. Neighbors estimate there are approximately 15-22 turkeys there.

"It's kind of nice seeing wildlife in Minneapolis. You know, because they're all wild turkeys. And they don't bother anybody so why move them?" said Adeline Wytaske who works at Lowry Grove.

But not everyone is in favor of the flock. Some neighbors say the turkeys are a nuisance and have damaged their property in the past. One or two recent complaints to the Minnesota Department of Natural Resources (DNR) resulted in rumors the turkeys would either be killed or removed.

This weekend, neighbor Nicole Geier created a petition called, "Save the awesome wild turkeys!" As of Monday night, the petition had more than 550 signatures in support.

But the DNR put those rumors to rest Monday. DNR Information Officer Harland Hiemstra responded saying they do not go out and kill turkeys in this type of situation.

He went on to say, "We also do not trap and relocate, nor do we typically authorize others to do that. Generally speaking, if wildlife is causing a nuisance in one area, relocating them often just relocates the problem, especially if, as is likely in this case, the problem arises out of animals acclimating to being fed by humans."

To avoid problems, the DNR asks people to not feed wild turkeys which can cause the birds to act tame and may lead to bold or aggressive behavior. The DNR has more suggestions on its website on how to avoid common problems with wild turkeys.

Ultimately, it is a local issue. According to Hiemstra, if the city wanted to remove the turkeys they would need to submit a permit request to the DNR.

The DNR has already been in contact with the chief of police in St. Anthony about steps the city can take to avoid problems.

KARE 11 reached out to the offices of Ward 1 and Ward 3 in Minneapolis. Ward 1 received one complaint about the turkeys over the weekend. Ward 3 said over the years they have received very few complaints about the flock.

According to Hiemstra, DNR wildlife staff are hoping to check up on the site sometime this week.