A bicyclist collided with a car at Cedar Ave. South and Edgewater Blvd. this week, sparking calls for change at troubled Minneapolis intersection 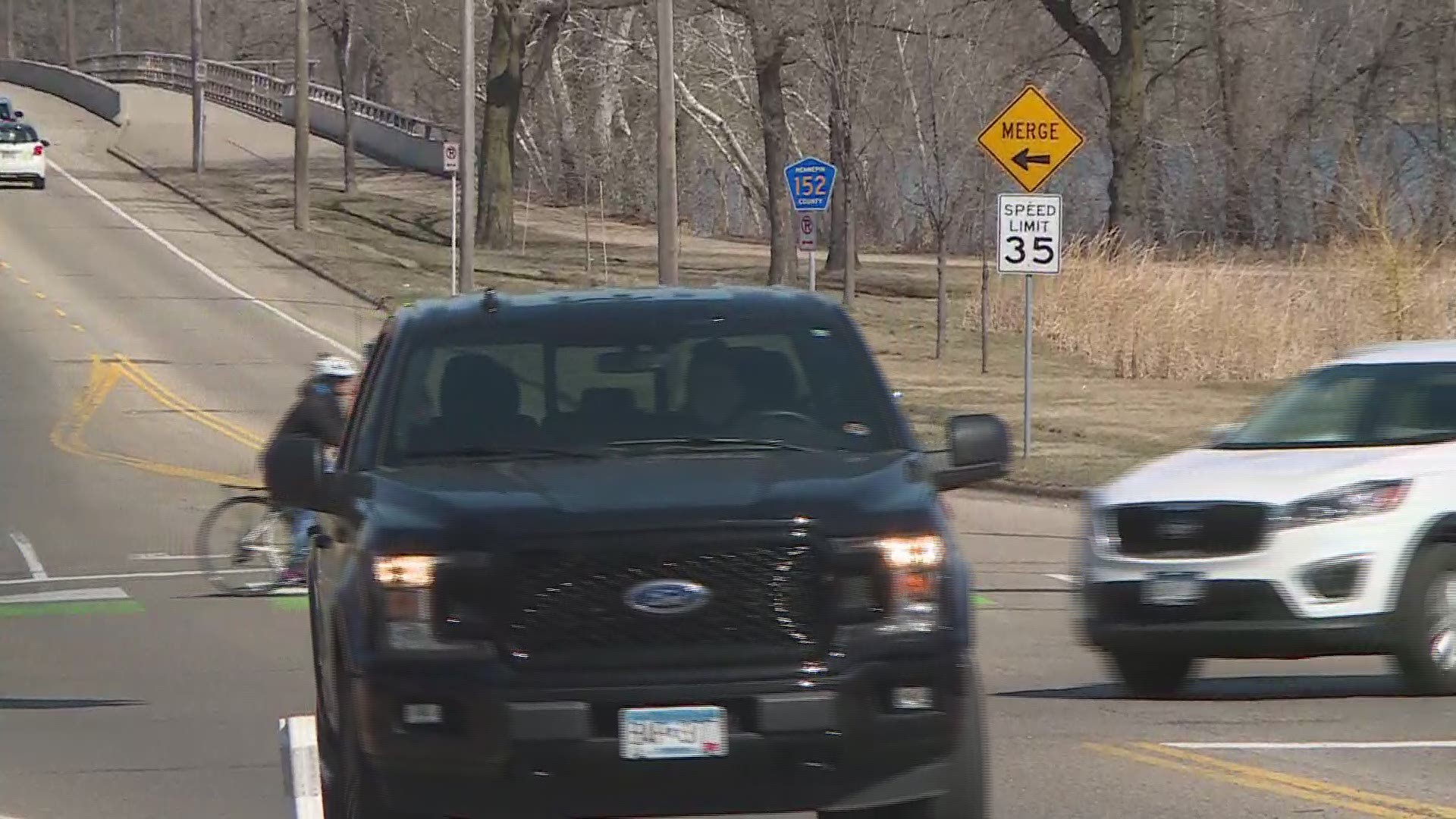 MINNEAPOLIS — A busy intersection near Lake Nokomis made the news again this week, when a bicyclist collided with a car there. He survived the crash, but it renewed a debate about the safety of that south Minneapolis corner.

The accident took place at the intersection of Cedar Avenue South and Edgewater Boulevard, next to Fat Lorenzo's, a pizzeria that has been there for 35 years.  Customers and employees ran to aid the biker, who was wedged beneath an SUV on the roadway.

"They saw the accident and they got out and lifted the car up, and pulled the guy out," Scott Siegel, the restaurant owner, told KARE.

"We thought it would turn out for the worst, but when the paramedics got here it turned out for the better."

Siegel has seen more than his fair share of accidents there over the years, including some that ended with vehicles bouncing into his building. He's also been rear ended while waiting to turn left from northbound Cedar onto Edgewater to get to his establishment.

"It's really about speed," he said, pointing at the traffic on Cedar avenue whizzing past him. "Those cars are going 50 right now. They should be going 30 or 20."

Area residents usually aren't surprised to hear of accidents at that spot. Mary Hanson, who has lived in the Nokomis area for 15 years, said it's one the first things people learn about the neighborhood is to be wary if driving, biking or walking through that junction.

It's at a point where northbound Highway 77, a four-lane divided highway, is squeezed into the two-lane Cedar Avenue, a city thoroughfare. Two northbound lanes merge into one where Cedar crosses Edgewater. A half block north lies the intersection of Cedar and Lake Nokomis Parkway.

"There’s a new bike path added a few years ago that has a ton of bike traffic and stroller traffic and walker traffic," Hanson explained. "And then you’ll have a lot of people cutting through the neighborhood in their cars."

Some have suggested closing off Edgewater Boulevard, while others have proposed creating roundabouts as a way to force vehicle to slow down. The City of Minneapolis installed bollards -- plastic posts -- at key spots to encourage people to stay in their lane and to slow down when taking corners.

"Everybody wants it to be safer, but no one’s been willing to commit to a solution yet," Minneapolis City Council Member Jeremy Schroeder told KARE.

He's been hosting community meetings and looping in county commissioners and park board members to work on solutions.  He said he understands the frustrations of neighbors because he's one of them himself.

"I’m a neighbor. This is an issue I knew about even before being elected," Schroeder remarked.

"I worked on it for our neighborhood board, talking about making this safer. I know neighbors have been waiting too long to have this be a safer corner."

Park Board Commissioner Steffanie Musich lives close enough to the intersection to hear the crashes, and actually walked down and took photos of the aftermath of Tuesday's bicycle accident.

She said the Park Board often is portrayed as the barrier to changing the design of the troubled intersection, but she cites a a clause in the Lake Nokomis and Hiawatha Master Plan that commits the Board to devoting park land to a solution.

That section reads as follows:

"MPRB shall remain involved in ongoing City- and/or County-led study and improvement of transportation and safety around the Cedar Avenue / Nokomis Parkway / Edgewater Boulevard intersections.

"Involvement may include assistance with community engagement, access to land for information gathering, continued planning collaboration, and, if warranted, making land available for implementation of a solution that results from careful study, community engagement, and analysis of the positive impact on the park experience."