The Minneapolis Institute of Art is now the site for the newest, and most reasonable puzzle room in the area. 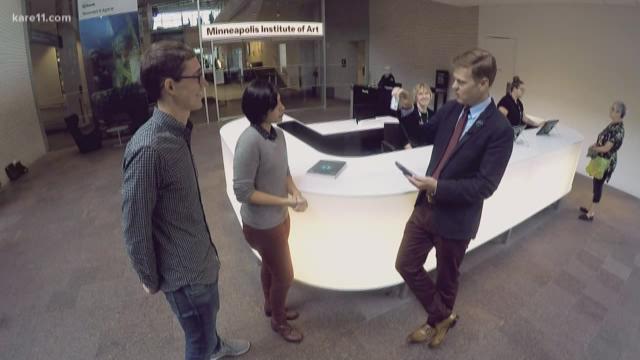 If you're looking for the newest, most affordable puzzle room in the Twin Cities, you can now turn to an untraditional source: The Minneapolis Institute of Art (MIA).

"Come with an open mind and come sort of ready to rethink how you navigate and experience a museum," said Douglas Hegley, Chief Digital Officer at MIA.

A new app now gives the public a chance to solve an interactive mystery that take them through the museum. Download "Riddle Mia This" on your iPhone or Android device and you can begin unlocking hidden clues that lead you on a journey throughout the museum.

"We've spent a lot of time at the museum," said Colin McFadden Technology Architect at the University of Minnesota. "We've been testing and testing some more as we build out the Riddle Mia This App."

Colin teamed up with Samantha Porter, a Digital Preservation Specialist at the University of Minnesota, to create the giant game within the museum.

"By using things like augmented reality and virtual reality you can make people actually feel like they're in a different space," Samantha said.

The idea won the prestigious 3M Art and Technology Award, which enabled the team to make the virtual mystery a reality.

"It's been a big adventure," Samantha said.

"The biggest thing we've been working through is just how big this museum is," Colin said. "I think we knew that going in but the more time we spent here, the bigger it felt."

Colin says they spent months trying to figure out how to help players navigate around, while also making sure the software was functional.

"We've done a lot of puzzling and so figuring out that balance of difficulty because we want it be successful to everyone has been a struggle," Colin said.

"Our testers ranged from around 12 years old to people in their 60's and everyone seemed to sort of have fun," Samantha said.

Douglas Hegley was one of the first to play it and says it strikes the perfect balance.

"It's engaging you with the museum but gamifying that experience, making it different and delightful," he said.

And the museum wants to make sure it's accessible to all.

"If you don't have a phone, or the phone isn't working, you have free devices you can borrow," Douglas said. "There's no cost barrier."

And first timers don't need to worry, there are some helpful hints if you need them.

"I got stuck a couple times and I even had to use the hints, I'm a little embarrassed to say that but it's true," Douglas said. "I was a little worried at one point but I did manage to get to the end."

The game usually takes about an hour, but there is no time limit, and groups are encouraged to play together.

"It's an activated space and a museum comes to life when people are in our four walls and experiencing and sharing things and talking to each other," Douglas said. "We don't want to be still and quiet and dusty and boring, that's not the goal."