Oktoberfest 2019: A two-day celebration of German heritage and culture at the historic Schmidt Brewery

Food, fun and of course...beer! There's something for everyone at Saint Paul's Oktoberfest. 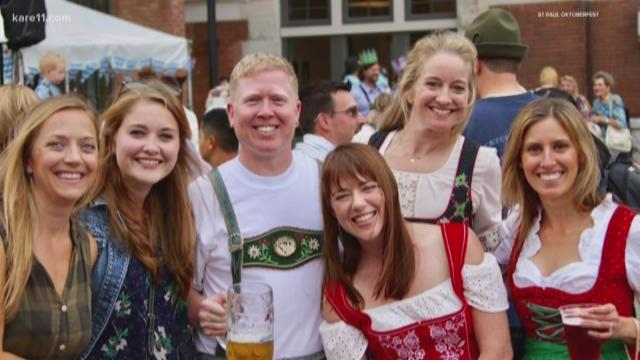 The parade leaves Mancini's Char House at 5 p.m. and travels 1.3 k (.7 miles) along West 7th Street to Schmidt Brewery. After the parade, the Pittman Persherons horses will be available for petting and photo ops until 8:30 PM.

Here are some of the festivity's highlights:

The only competition of its kind in the US! Strongmen and women can compete to see how high they can lift a 508 pound concrete “stone”. Popularized in the late 1800s by the “Bavarian Hercules”, a butcher called Hans Steyrer, the heavy lifting competition is still practiced today. No registration required.

Watch dachshunds and dachshund mixed-breeds compete in hurdles and dashes. Adorable to look at, this surprisingly bold and tenacious breed was developed to flush badgers out of their burrows.

A kid-friendly carnival, complete with bouncy inflatables by Affordable Inflatables. Admission: $8 per child for unlimited fun including performers and free face painting (parents: bar #1 is only steps away).

Held on the main stage.

Assemble a team of at least four people (one per bed post) and race our official bed at the
19th Annual Bed Races.

Oktoberfest Wedding Vow Renewal (Saturday, 5 p.m.)
The original Oktoberfest in Munich celebrated a historic royal wedding. Rather than celebrating a wedding, we invite you to renew your vows, Oktoberfest-style. Held on the Cultural Stage followed by a polka dancing lesson and a wedding dance in the main tent.

Dance or tap your toes to traditional polka music by the Bill Koncar band, Dale Dahmen & The Beats. Other entertainment includes The Concord Singers, a traditional men's chorus from New Ulm, the Edelweiss Dancers, and concertina virtuoso Josh Eidsor.

The same beer that is drunk at the original Oktoberfest, Paulaner Oktoberfest beer can only be brewed in Munich. Courtesy of Paulaner USA, the kegs are on their way to St. Paul. Beers on tap this year: