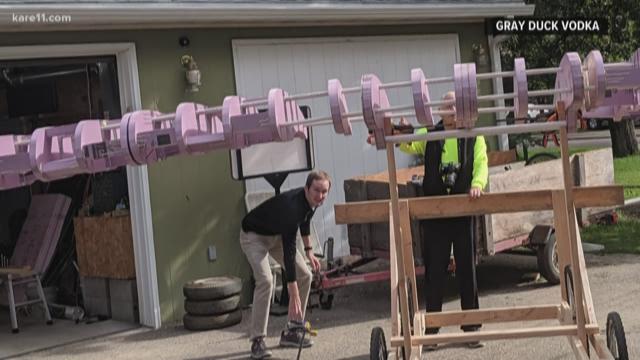 It features homemade aircrafts that will "fly" as far as possible from a 30 foot high platform on the Mississippi River.

Of the 40 teams competing at next week's event, 25 are from the Twin Cities area and 32 are from Minnesota. Each team will launch their homemade aircrafts as far as possible into the Mississippi River from a nearly 30-foot-high platform, vying to earn their wings in this unique and exhilarating event. Each team of five will be scored by a panel of celebrity judges on how far their flying craft glides, their creativity and their showmanship. Sky's the limit on designs - some of which include:

•    Das Fliegenlucy: A team of employees from The Nook in St. Paul taking a Juicy Lucy to the skies

•    Spoonbridge Cherry Glider: Don't call it a comeback, this squad makes a return to the Mississippi riding an iconic Minneapolis art sculpture after competing in 2010

•    Smore Problems: What do you get when an architect and a group of engineers set up camp at Flugtag? A flying S'more.

The first time St. Paul hosted Red Bull Flugtag, which means "Flying Day" in German, was in 2010, when the then world-record was set at 207 feet by 'Major Trouble and the Dirty Dixies' in front of tens of thousands of people. Attendance to the event is free of charge.