When asked by prosecutors Patrick Lofton, Hacker told jurors it was his opinion that "the use of force (by then-officer Noor when he fatally shot Justine Ruszczyk Damond) was use of deadly force was excessive, objectively unreasonable, and violated police policies and training." 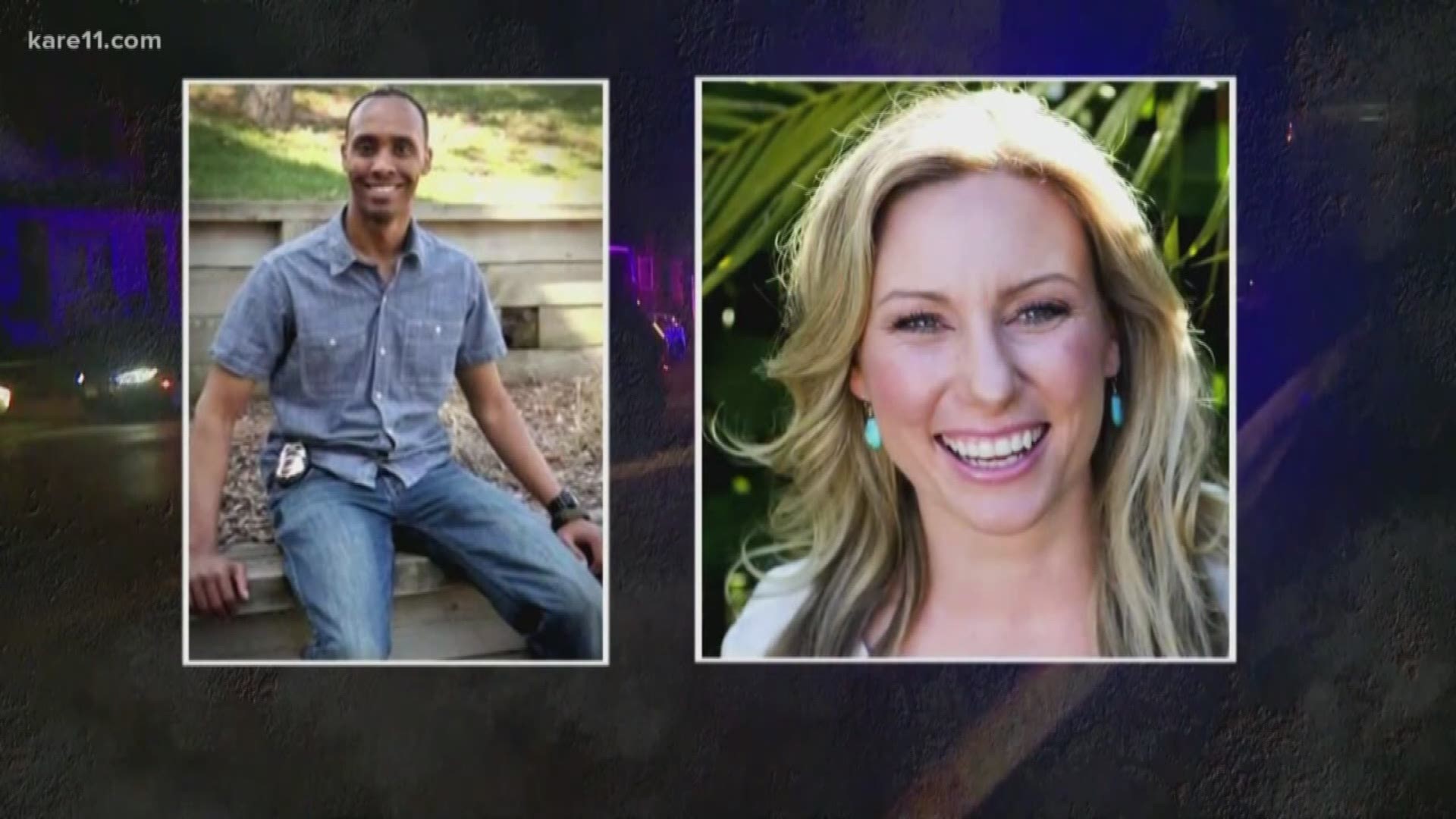 MINNEAPOLIS — Prosecutors turned to 'use of force' experts Wednesday as they moved closer to wrapping up their case in the murder trial of former Minneapolis Police officer Mohamed Noor.

First to the witness stand was Lt. Derrick Hacker of the Crystal Police Department. Hacker is head of investigations for his department, a use of force instructor and head of the West Metro SWAT Team. He also earned national attention as a key investigator in the murder of a child named Barway Collins several years ago.

When asked by prosecutors Patrick Lofton, Hacker told jurors it was his opinion that "the use of force (by then-officer Noor when he fatally shot Justine Justine Ruszczyk Damond) was use of deadly force was excessive, objectively unreasonable, and violated police policies and training."

RELATED: A timeline in the fatal shooting of Justine Ruszczyk Damond

KARE 11's Lou Raguse, who has been in the courtroom for each day of the trial, says Prosecutor Lofton moved through all the elements of what led to the shooting one by one, effectively posing them as questions members of the jury likely have at this point in the case.

Question: Did Justine Ruszczyk do anything wrong?

Hacker: "No, she did nothing wrong. Police are approached daily. The public approaches officers in their squad cars routinely."

Q: Did the dispatcher do anything wrong? (in not telling Justine to stay inside)

Hacker: "No, in fact the dispatcher even provided additional message that Justine wanted estimated time of arrival (ETA)."

Q: Is it a good idea to pull out a weapon in a squad car?

Hacker: "No, it's not. Pulling out a weapon inside a squad car is unreasonable and unacceptable."

RELATED: Minneapolis Police Chief says Noor and Harrity's body cams should have been on

Hacker went on to say even if Noor and partner Matthew Harrity were responding to a shooting, he thinks they should have kept their weapons holstered until they exited the squad.

Q: What about Noor shooting across his partner?

Hacker: "It was excessive, objectively unreasonable, and extremely dangerous."

Prosecutor Lofton showed Hacker the body cam video from Sgt. Shannon Barnette that shows Noor sitting in a car following the shooting of Ruszczyk Damond. Hacker explains when Noor points both hands toward driver window, his opinion is that Noor is demonstrating the shooting because his hands were in "cupping motion" like when holding a gun.

Hacker talked to jurors about how weapons are to be treated, never pointing unless intending to shoot and kill or destroy whatever the weapon is pointing at. His opinion on the fact only one shot was fired is that it's relevant because officers are taught to shoot until threat is eliminated. If only one shot fired, Hacker maintains, that means Noor recognized after the shot that it wasn't really a threat. "There should have been time prior to the shot to identify there was not a threat in the first place," Hacker told the jury.

Lofton: "Was it reasonable to perceive there was a threat?"

Hacker: "No reasonable officer would have perceived a threat just from a person coming up to their squad."

Lofton: "Is being spooked or startled the same as apparent death or great bodily harm?" (needed to justify deadly force)

Hacker: "No it is not," adding that "Officers are spooked daily."

Lofton brought up a point that is important to the prosecution's case, whether Justine slapped the squad car makes the shooting justified.

Hacker: "No, it really is irrelevant. The fact remains, she approached a car and was shot."

Lt. Hacker went over how he feels the officers should have handled the situation in the alley if they were spooked. By yelling "Stop. Don't move. Show your hands. Who's there?," or by using a spotlight or driving forward until the true threat could be assessed. Hacker testified that even tasing Justine would have been excessive force. "Any use of force is excessive," he says.

Lofton: What if partner is visibly scared and reaching for a gun?

Hacker went over the definition of use of force justification and said "mere words alone" and "mere suspicion" are not enough. So Harrity yelling "Oh shit" or "Oh Jesus" were not enough.

Once the prosecution finished interviewing Hacker, the defense cross-examined him.

Defense attorney Peter Wold was doing an effective job - pointing out that this is Hacker's first time testifying as a use-of-force expert, and that he has no experience with two-person squad cars, when they ran into a snag.

Wold was attempting to show that Hacker partly based his decision on facts that are in dispute - whether the officers should have connected Justine's call to an earlier call of woman with dementia in need of help, and whether the officers rode through the alley with their guns in their lap.

Hacker then mentioned seeing a report from Noor's defense investigator in which Noor himself said the guns were in their laps. Wold said "no such report exists" and the judge had to send out the jury to sort it all out.

It turns out, defense private eye William O'Keefe wrote in a report that Noor said he holstered his gun when he got to the end of the alley - implying it was out when driving in the alley - but then amended the next report with a footnote that said that information was wrong.

Wold said O'Keefe called Noor to check the statement for accuracy and Noor said no, he didn't pull his gun out until he shot. The judge said this evidence can't come out in the questioning or cross-examining of Derrick Hacker.

Prosecutor Patrick Lofton was very impassioned in his disagreement, saying that the information about the guns out in the alley also came from a report by MPD Lt. Stoll, information from Sgt. Barnette, and more.

But the judge decided to order the reference to that Noor statement stricken.

As the defense continued to cross-examine, Hacker said he had never shot a person in the line of duty, only a dog. Wold's tone was condescending when he asked about "apparent death or great bodily harm" presented by this rottweiler or pit bull Hacker encountered in SWAT.

Lt. Hacker described the dog charging at one of his partners, evaluating the threat and shooting the dog.

Wold highlighted how Hacker based so much of his opinion on what Harrity said and did, and said, "Whether Harrity's perception is right or wrong has nothing to do with Noor."

Hacker testified that Harrity pulling out his gun was not enough for Noor to shoot, and Harrity swearing was not enough. Wold responded, "So you wait until you're shot then, that's enough to use deadly force, sir?"

Hacker answered no, then went on to say, "You said it yourself, sir, he saw a 'figure.' A genderless, ageless figure. A figure is not enough."

The prosecution's second use of force expert was Tim Longo, the former police chief for Charlottesville and Baltimore.

When he was asked whether police are trained to handle citizens approaching their cars, Longo replied, "If officers aren't trained to handle that, then we ought to train citizens not to walk up to police cars. The result is a shoot-first, ask questions later mentality." That response brought a reaction from many in the courtroom, including Ruszczyk's family.

The defense will cross-examine Longo on Thursday.

KARE 11's Lou Raguse is following the trial from the courtroom and posting updates on Twitter.