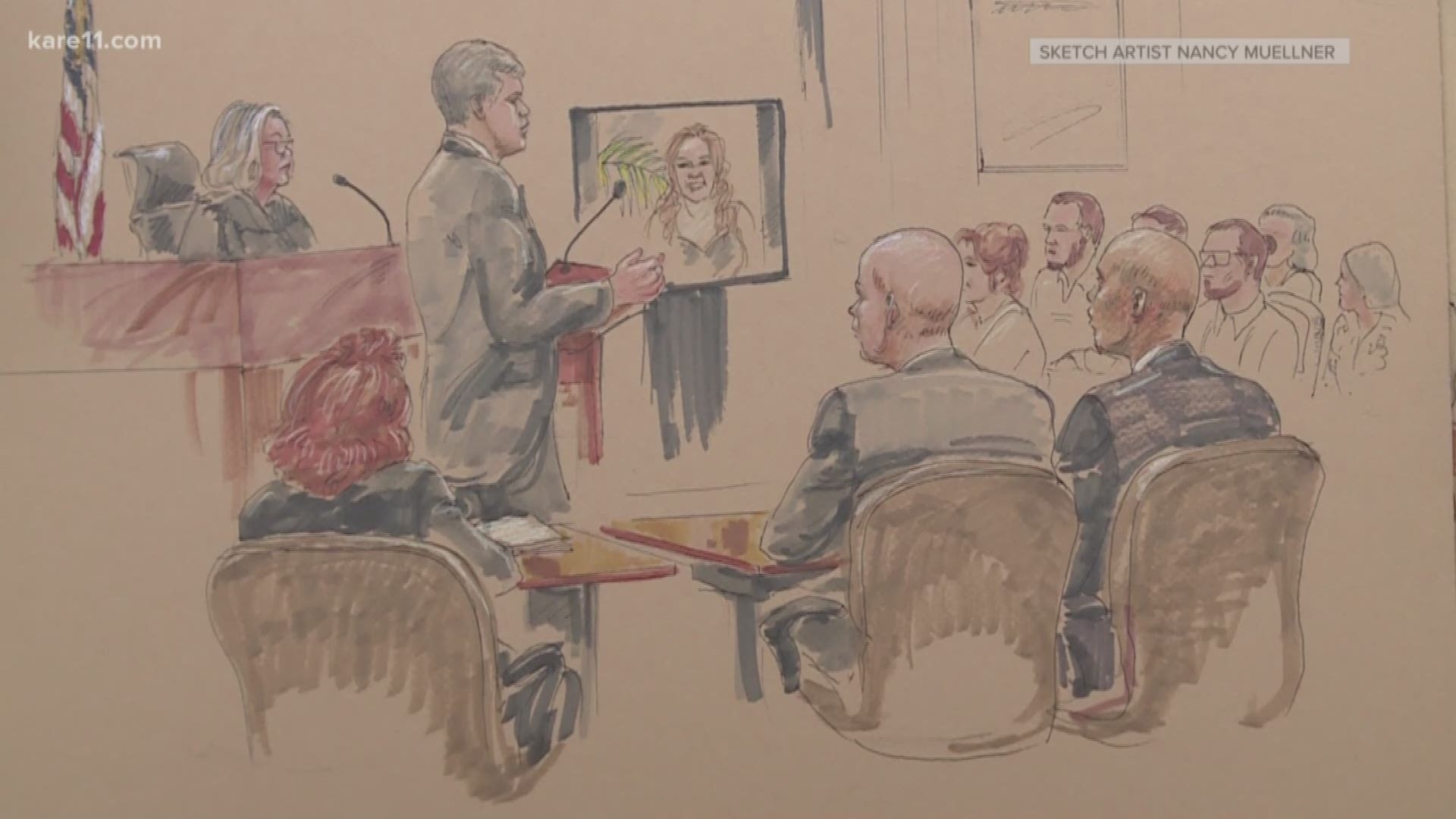 MINNEAPOLIS — The jury in the trial of Mohamed Noor listened Wednesday to 911 calls and saw autopsy photos from the fatal shooting of Justine Ruszczyk Damond.

Former Minneapolis police officer Noor is charged with murder and manslaughter in Ruszczyk's 2017 death. The shooting happened after she called 911 to report a possible sexual assault.

On Wednesday, day two of testimony in the trial, the Medical Examiner took the stand and showed the gruesome autopsy photos. He said the bullet hit a major blood vessel and that Ruszczyk may not have survived no matter how soon an ambulance had arrived. The bullet went into the left side of her abdomen and stopped in the middle by a spinal vertebrae.

The jury was shown the actual clothing Ruszczyk was wearing when she was shot: Pink pajama pants and a pink T-shirt with a drawing of koalas. Toxicology tests showed Ruszczyk did not have any alcohol or drugs in her system when she was shot.

The BCA witness who took the crime scene photos was cross-examined, with the defense trying to demonstrate how dark it was at the scene.

Right before the lunch break, jurors saw crime scene photos of fingerprints on the rear passenger side of the squad car. Since the prosecutor said in opening statements that Ruszczyk's prints were not found on the car, it's unclear whose they are.

The jury also listened to the 911 calls Ruszczyk made the night of the shooting. Her voice sounded stressed and she sighed several times. She said she was “not sure if she’s having sex or being raped” and “I think she just yelled out help.” Ruszczyk was told, "Help will be there soon."

She then called back and said "I just reported one but no one’s here so I wonder if they got the address wrong.”

It was clearly difficult for Ruszczyk's family to hear her voice on the calls. They closed their eyes and wiped away tears.

On cross-examination of a 911 communications manager, the defense tried to show that the priority of the call was lower when the officers were dispatched to the alley, and it was only raised after the shooting.

This testimony follows a full day Tuesday of opening statements from the prosecution and the defense, and emotional testimony from Ruszczyk's fiance, Don Damond.

Noor's defense team filed a motion on Wednesday asking that some of the body camera video not be used, saying that portions of it are irrelevant. The motion claims the video of the lifesaving efforts is "prejudicial and risk inflaming the passion of the jury." The prosecutor argued that the defense has had a full year to say something about the videos. The judge was also irritated with the timing.

Reporter Lou Raguse is inside the courtroom. He will post updates on Twitter, and this article will be updated, as jury breaks allow.