The prosecution and the defense told different stories about the night Justine Ruszczyk Damond was fatally shot. 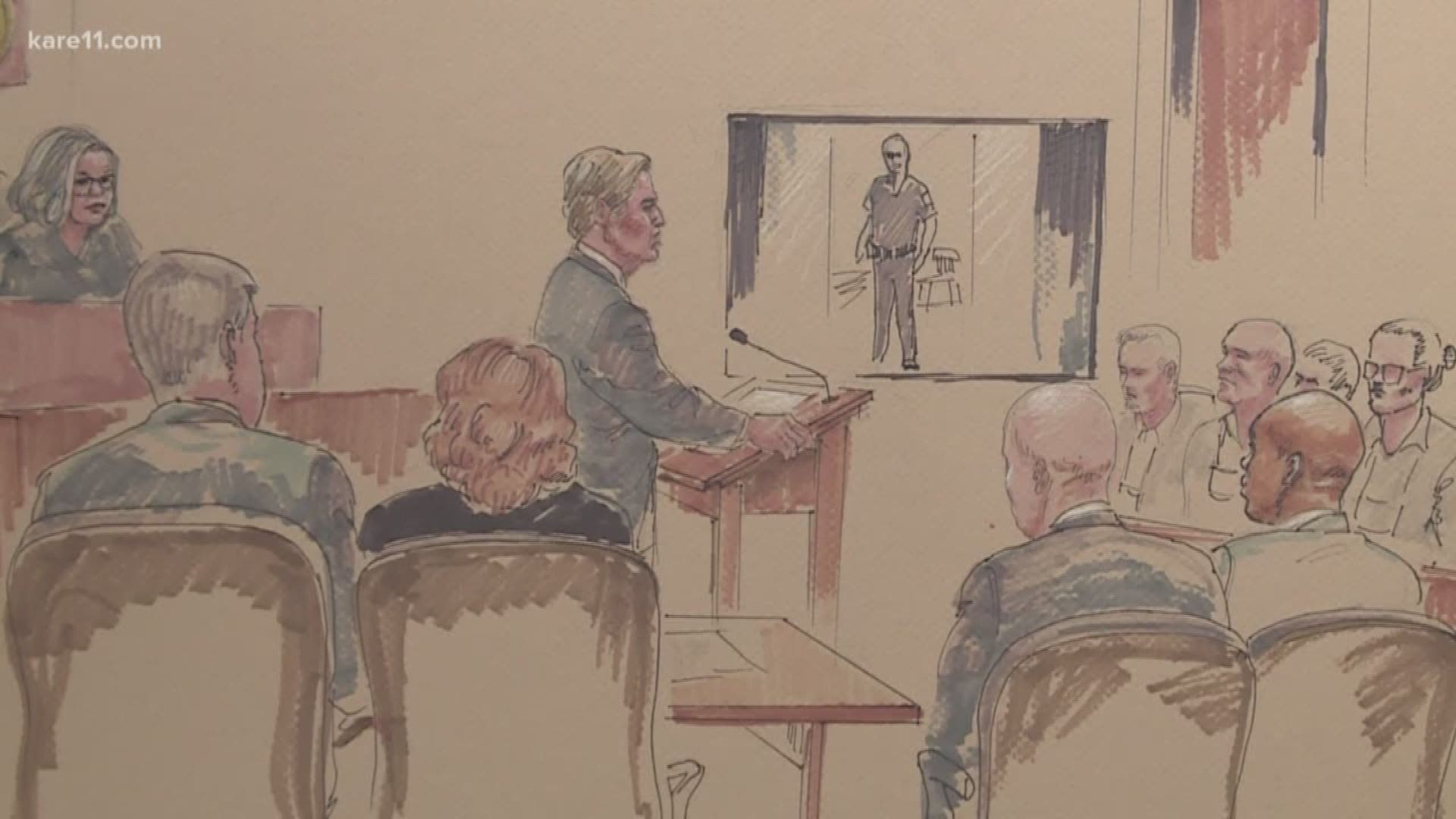 MINNEAPOLIS — The jury heard emotional testimony from Justine Ruszczyk's fiance on Tuesday, in the trial of the former Minneapolis police officer charged with murder and manslaughter in her shooting death.

Damond told the story of how he and Ruszczyk met and fell in love. He told jurors that Ruszczyk, who was Australian, had wanted to move to Sydney and have a child, and that was the plan. But when Damond's then-teenage son was having trouble with the idea, Ruszczyk agreed to move to Minneapolis instead. She arrived in the U.S. in March of 2015.

On the night of the shooting, Damond said he was in Las Vegas for work. He and Ruszczyk texted good night at 10:04 p.m., but then at 11:23 she tried calling him twice.

When Damond stepped out of the meeting and called her back, she said she could hear something alarming. "It sounds like sex noises, but also sounded distressed." Damond said he had the impression that Ruszczyk feared a woman was being raped. 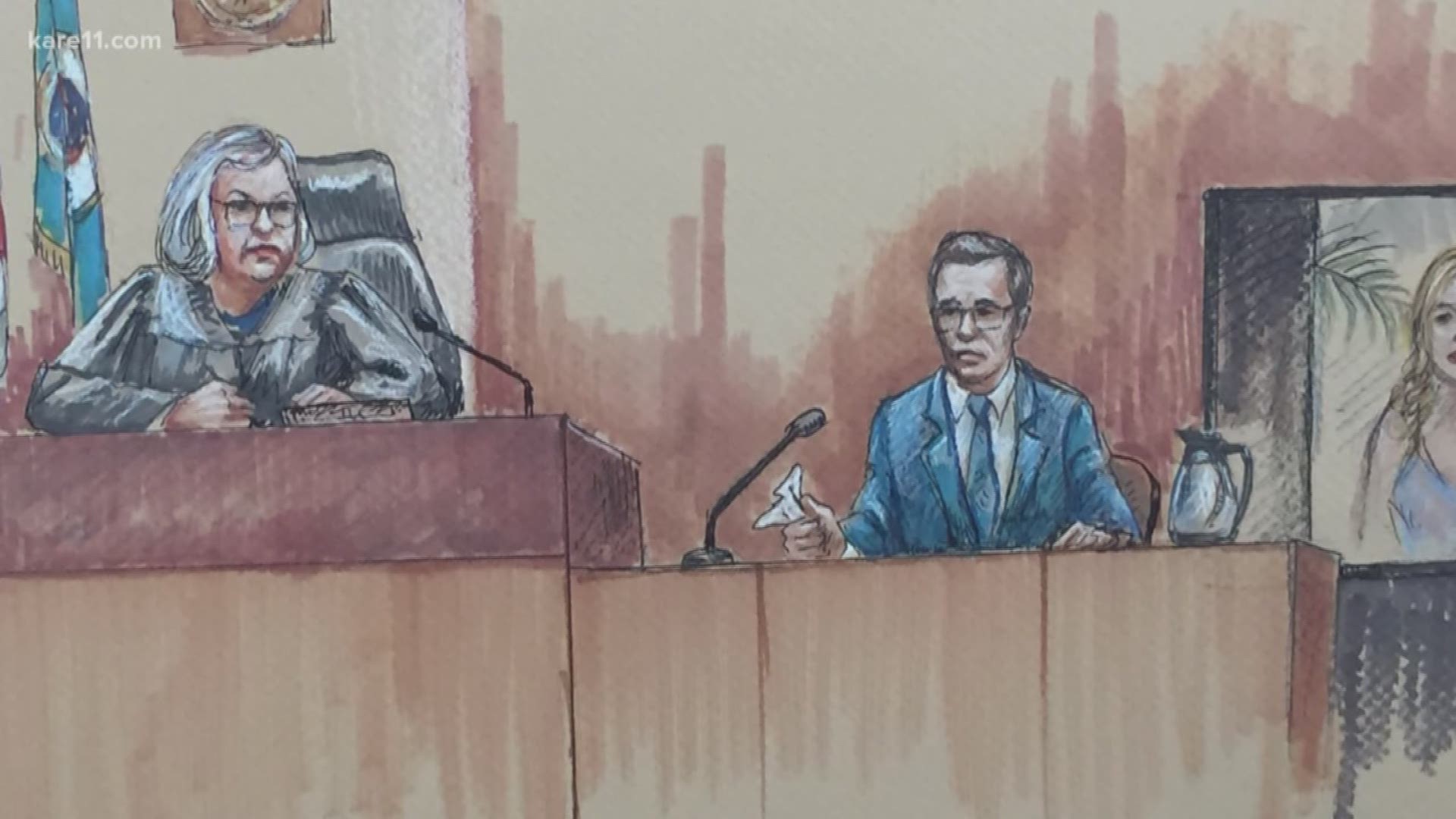 Damond told her to stay put and call 911. She was on the phone with him when she said, "OK, the police are here." He said he thought she meant at the front door, so he was surprised when she didn't get back to him right away.

Finally after 2 a.m., Damond said police called and started asking him questions about where he was, how long he had been gone, and when he was coming home. They then told him, "There's been a shooting and we believe Justine is deceased as a result of that shooting."

At that point in the testimony Damond began to break down. He said his colleague brought him to the airport and Damond had to call Justine's father, John Ruszczyk. "Worst phone call I ever had to make in my life," he said.

Damond took the stand after opening statements Tuesday from first the prosecution and then the defense.

Prosecutor Patrick Lofton began by telling jurors the story of the night that led to the charges against Mohamed Noor.

Lofton told jurors that before Ruszczyk called 911 to report a possible sexual assault, someone else called police to report a woman who seemed to need help, four blocks from Ruszczyk's house. Noor and his partner Matthew Harrity also responded to that call but couldn't find the woman.

An hour and 20 minutes later, Ruszczyk called. Lofton pointed out that Noor and Harrity responded to the second call, to a "woman screaming," in the same alley, which they already knew was "by far the neighborhood with least crime in city of Minneapolis."

The officers were informed that the caller called again, asking for an ETA, Lofton said. They arrived at the alley with their lights off, guns out, and kept driving. They turned the lights back on, and waited for a biker to pass.

Lofton said after Justine Ruszczyk called 911, she called her fiance, Don Damond, and said "OK, the police are here." Those are the last words she said, Lofton states, before she saw the squad car and went over to it.

"One minute and 19 seconds later she said the words, 'I'm dying,'" Lofton said.

Lofton said Harrity gave a quick statement to responding officers, then another statement to the sergeant who arrived, saying they were spooked, but never saying that Ruszczyk tapped the car.

Lofton said that statement came as a BCA investigator later speculated. According to Lofton, as investigators spoke at the scene, one said, "Something must have spooked them, and the other said, "Maybe something came into contact with the squad." The first then replied, "Maybe she slapped the squad." Lofton said Harrity didn't mention a "thump" until three days later in a BCA interview.

Lofton said Harrity told investigators at the scene, "She just came up out of nowhere. We both got spooked, and I had my gun out. I didn't fire. Then Officer Noor fired."

"It is often said there are two sides to every story," he said. "I promise you that certainly is the case in this story."

Wold said Noor has been heartbroken for Ruszczyk's family from the moment he realized she was not the threat he thought she was when he fired.

He told the jury that Noor was born in 1985 in Somalia, pre-civil war. His father worked for the government and raised them on a small corn field. But soon after, violence erupted in that country, and they fled in the middle of the night to a refugee camp in Kenya.

With a stroke of luck, in 1993, the family was given the chance to immigrate to the U.S. Noor was 7.  The Noor family moved from New York to Chicago, where Noor started first grade not knowing a word of English. Noor learned to read and write, and by fifth grade, English became his language. His father learned of the Somali community in Minneapolis and they moved here. He finished high school, went to community college and then Augsburg, and got his U.S. citizenship. He was a hotel manager, got married and had a son. His marriage ended in 2012 but he remarried in 2017.

Noor learned of a Minneapolis Police Department cadet opportunity, inspired by respected Somali men on the MPD force. Wold told the story of Noor's training, his good marks, and the POST exam he passed on his first attempt.

Then he planted a seed with the jury, after mentioning Noor's counter-ambush training, saying, "One of the most frequent causes of death for on-duty officers is surprise ambush. Unfortunately it is in the back of the head of every off..."

The judge sustained the objection, but Wold had planted the seed. He told the jury that deadly force is justified when it is necessary to avoid apparent death or great bodily harm.

Wold told the jury that Noor exceeded expectations on his first performance review. He said "context is critical" when determining whether the shooting was justified.

Wold told the jurors that the caller mentioning a "woman in distress" on July 15 asked not to be contacted, and for all they knew, it was an anonymous call. They had their lights out and radio down.

Wold then described the partners stopped at the end of the alley to let a bicyclist pass through, when a slap was heard "on the back of the squad." Wold slapped his hand down on the table at that time, making some of those in the courtroom jump.

"In the silence of that night - a bang," Wold said. "What happened in the next split seconds are what this case is all about."

Wold said Noor "sees his friend and partner turning toward the sound, then he sees him jump and yell, 'Oh Jesus!' He's never seen his partner this distressed."

Noor "rightfully perceived their lives were in immediate danger," Wold said. "Noor can't see what's behind his partner where the noise is coming. All he sees is Harrity look back, scream, struggle to unholster his gun. Noor drew his gun to protect his partner and himself."

When Noor saw a frame move into the driver's side window, he shot once to protect his partner and himself, Wold said.

"This was a perfect storm with tragic consequences," he said. "It is a tragedy but it is in no way a crime."

Wold told the jury that both Noor and Harrity thought they were being ambushed.

"That's exactly what crossed Matthew Harrity's mind when he heard the noise," he said.

Reporter Lou Raguse is in the courtroom for the whole trial and will be sharing updates on Twitter.