The store's owner is asking people to visit this weekend so she isn't left alone. 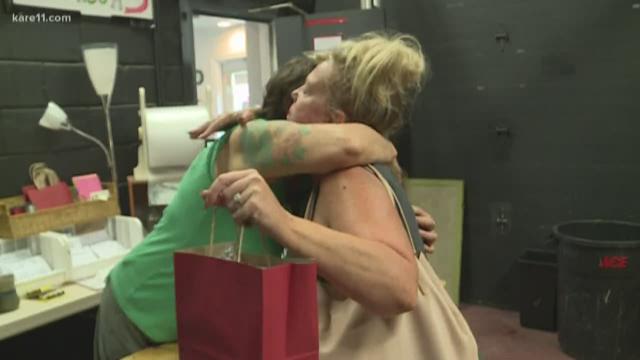 She asked customers to come to The Goddess of Glass & Friends, but said they didn't have to buy anything.

"Just sit around and use my WiFi, eat some donuts, and drink some coffee," she wrote.

Beckers says Friday afternoon three men came into her business in the city's Victory neighborhood. It wasn't open yet, but the door was unlocked. She asked them to leave and says they refused. That's when things escalated.

Beckers say she tried to retreat to her office at the back of the store and close the door, but one of the robbers managed to get his foot in before she could close it. She says he grabbed her mace and used it against her.

"He got me all back here," she said, pointing to where the robber sprayed her, "Along the back of my shoulder, my right arm, down my pants."

Credit: Jeana Sommers
Mace on the wall of Beckers' office after a robber sprayed her with it.

While Beckers was struggling with one of the men, the other two, she says, were taking two of the store's cash drawers.

Fortunately, Beckers says there were only used gift cards and coins in those drawers.

She recovered one of the drawers and the coins after the robbers abandoned it in a nearby alley.

This is not the first time Connie has had problems.

Earlier this summer, police say someone made off with cash from a store register.

In January, someone stole a 300-pound tiki statue from outside her store.

But the biggest loss happened just over four years ago, when Beckers' friend and fellow artist, Susan Spiller, was killed in her North Minneapolis home.

"When I was in my office holding the door shut against this guy coming after me, I can't say it didn't - it flashed," Beckers said of her friend's death, "What if this is it? What if I die here? I don't want to die here."

That brings us back to Beckers' plea:

Come to her business.

You don't have to buy anything.

"I need people to come and be my personal bodyguards, if you will," she said, "You know, this only happens when I'm alone and I shouldn't be alone here as much as I am."

Alone she was not.

People came to the store Saturday, some just to sit. A friend of Beckers donated coffee to serve to the people who came. Thirsty Whale Bakery gave her donuts.

"Never once have I faced a crisis I couldn't get through, because people always show up. Always."