Randy: What I’ve learned since getting diagnosed with prostate cancer

Randy Shaver shares some of his journey with prostate cancer. 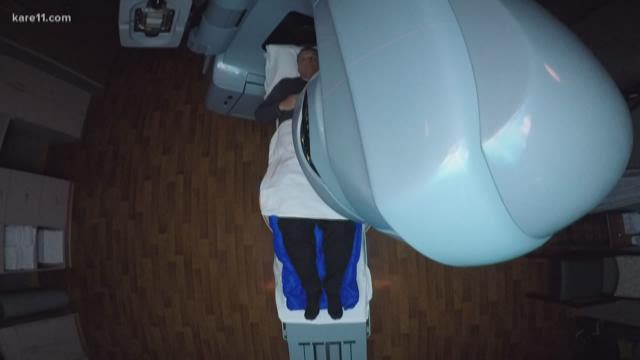 Radiation treatment number 18 for me at Minnesota Oncology in Maplewood. After much thought, I chose this option, radiation combined with the drug, Lupron, over robotic surgery and other treatments for prostate cancer.

Lupron turns off testosterone in men, which basically kills the cancer. But radiation is used to make sure it's gone both inside and outside the prostate. For me, 26 radiation treatments in all.

Having been through cancer before, radiation is a relative breeze compared to chemo - but all treatments have side effects and prostate cancer treatment has its fair share. And most men actually choose treatment based on the side effects they can live with.

“When you're talking about incontinence and erectile dysfunction, which are the two big ones that men come in for, that's absolutely in the calculus," says Chris Knoedler.

Meet my docs, urologist and surgeon Chris Knoedler out of Metro Urology, and radiation oncologist Warren McGuire. These guys get all the credit.

“You're doing great," says Dr. Knoedler. “You're right on track and just about done. I think, Randy, you approached things the way I would hope most patients approach them. First of all, you were proactive as soon as you knew you had any indication there was a problem.”

“What's the most important thing men need to know right now about prostate cancer?” I ask the doctors.

“There's no way to diagnose prostate cancer at a curable stage unless they get in and get seen and have PSA and rectal exam," says Dr. Knoedler.

Dr. McGuire adds, “And a lot of times prostate cancer can be suggested just by that exam rather than even a PSA, but the two of them together are very powerful and need to be done."

Both docs say tremendous progress has been made in prostate cancer treatment in the last 30 years.

In the 1980s, 50 percent of men diagnosed with prostate cancer already had metastatic disease. Now that number is down to 5 percent at diagnosis.

And the mortality rate for prostate cancer has decreased 42 percent in the last 25 years, most likely due to earlier diagnosis.

Credit: KARE
The mortality rate for prostate cancer has decreased 42 percent in the last 25 years, most likely due to earlier diagnosis.

“Let’s bust some myths about this disease. Only older men get prostate cancer?”

“Absolutely not true,” says Dr, Knoedler. “One day I operated on four guys in their 40s. It's not that uncommon. I just turned 60 and I'm operating on men younger than me all the time.”

"I see any number of men who are under 50 with prostate cancer it's a real struggle for them to decide how to go about treatment," says Dr. McGuire.

“There's some evidence it may decrease the risk,” says Dr. McGuire.

“There's no question that's one of the big, big issues for men, especially younger guys,” says Dr. Knoedler. “No. Not necessarily. Obviously, it can. In my case, I'm primarily a surgeon and we made tremendous strides with treating men and preserving sexual function.”

“And a lot of time their sexual function after surgery or radiation may not be as normal as it was prior, but there are also good treatments that can help improve that,” says Dr. McGuire.

Dr. McGuire says over half of his oncology patients have prostate cancer.

And with the baby boomers entering age 70, that number could easily rise.

“The demands of the health care system and the incidences of this is increasing, no question about it, and we're not making any more urologists or radiation oncologists at this point but we're going to have more business,” says Dr. Knoedler.