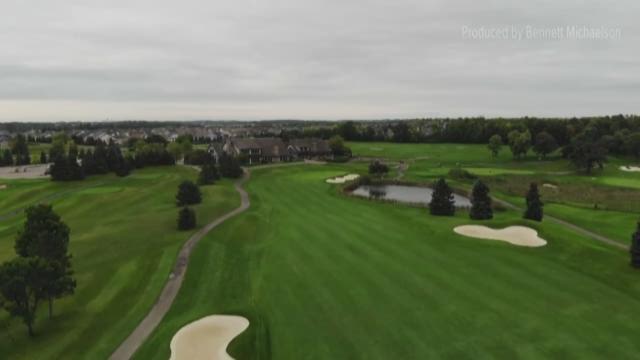 One of those is Rush Creek Golf Club which hosts the Shaver Golf event on Monday, June 3.

Golfers in Minnesota survive this (snow), for scenes like this. And Rush Creek Golf Club in Maple Grove has a lot of this to share. Golf splendor.

“I think the best thing about our golf course is it's good for everybody,” says Derek Stendahl of Rush Creek. “The course can definitely stand up to the best players as well as your everyday hacker.”

And that's the mix of players who show up the first Monday of June every year to play in the Rush Creek Randy Shaver Golf Classic.

Yes, it's a day of golf, but in reality so much more thanks in large part to the dynamic duo who run Rush Creek....Derek and Jenny Stendahl.

“For me it gives me purpose to my job,” says Jenny. “It's a day when feel like not only are you running a golf course but you’re doing something bigger than that.”

Golf is the sport, but cancer is the cause. It's the reason we gather, to raise money to support Minnesota's cancer community.

And cancer doesn't have to hit you directly for you not to know it's devastating effects.

“In the last few years several of our close friends have been affected in different ways,” says Jenny. “Too many,” says Derek. “Themselves, their kids or their wives, too many people.”

“But as I realized the magnitude of what you guys were doing, you want to do your little part,” says Jenny. “You and Roseann have both kind of taught me in situations any little thing you can do to help someone else is just right thing to do.”

Update: here are some shots of KARE 11 out on the links.