Fourth generation family newspaper reconnects Belle Plaine to its past

On "Communities that KARE," learn how Minnesota's oldest family-owned newspaper is preserving community history by sharing the news from a bygone era. 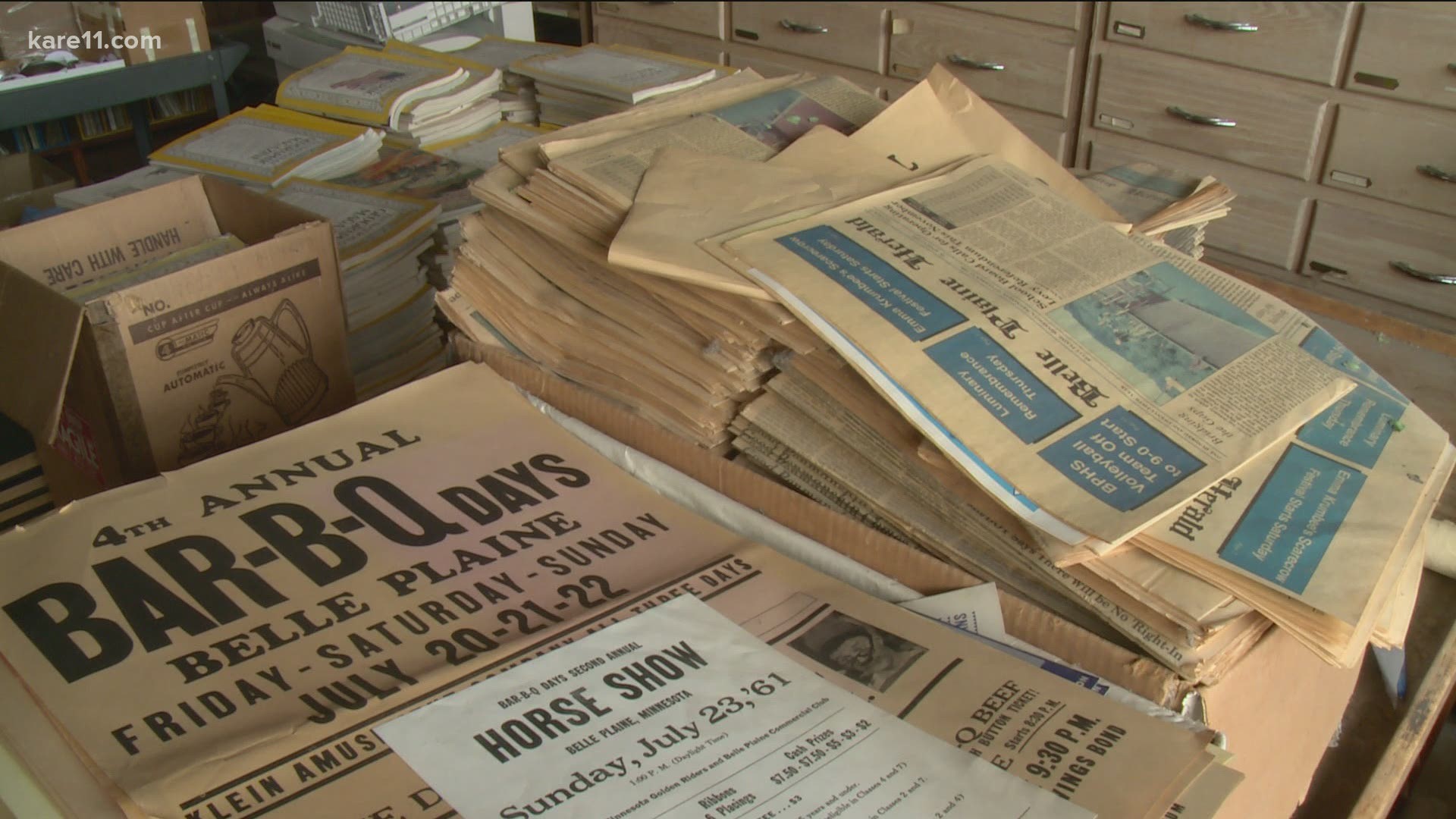 BELLE PLAINE, Minnesota — Each Monday in Communities that KARE, we showcase unsung heroes that make a difference. This week we travel to Belle Plaine, where the local paper has been preserving the city's history for nearly 140 years.

"We are standing in the original building of the Belle Plaine Herald where my great-grandfather, Joseph Edward Townsend, started the newspaper," said current publisher Edward Daniel Townsend.

That happened back in 1882. The paper was an offshoot of a printing company founded around 1875.

The current Townsend gave our KARE 11 photographer a tour of the paper's archive where that first edition sits. It looks and feels like a time capsule.

Among stacks of past editions of the Belle Plaine Herald, we found old photography equipment and cameras from the 1920s and earlier. There were also stacks of old photos of the town and Life Magazines, highlighting some of the most critical moments in American history.

It's a collector's dream!

This fourth-generation family-owned paper is nearing its 140th anniversary and continues to reconnect its readers to a bygone era.

Even as the Herald covers current events, the paper also republishes photos and snippets from 30, 60, 90, even 120 years ago, bringing a voice back to eyewitnesses of history. "We've got people in Belle Plaine that have fought in almost every war," Townsend said.

In the weekly paper, you can find out everything from what the weather was like for the crops in 1901 to what the infamous outlaws, the Younger Brothers, did the day they left the Stillwater Prison.

It's not just significant headlines that are worth looking back on.

"Belle Plaine stopped baseball during the pandemic, and our sports page didn't have any sports. So, we then decided we would start from the first archived stories of baseball in Belle Plaine," Townsend said.

So the paper started republishing articles from 1892 and ran them every week until they got to the 1900s.

"You can tell [the reporter] was writing as a spectator and as a journalist because he would get passionate in his writing, and that was always entertaining to read as well," Townsend recalled.

While the Belle Plaine Herald sparks fascination for the past, the Townsend Family is also looking towards the future.

"I'm excited, nervous, and I have high expectations," Townsend said.

"I think the history of the newspaper is something a community can't afford to lose. What happens today you can read about a hundred years from now. If we're gone, it's over."

No matter what direction the paper goes, Townsend is adamant that it will stick to its founding principles.

"I think the Belle Plaine Herald has stayed true to what my great-grandfather said we would do; this paper is going to have integrity. It's going to be respectful, and we're going to work with the community. I'm also interested in preserving the history of the community as well," Townsend said.