Melinda Nelson underwent a five-organ transplant in 2015. Today, she’s a speaker, author and life coach. She says her 10-year-old daughter is her inspiration. 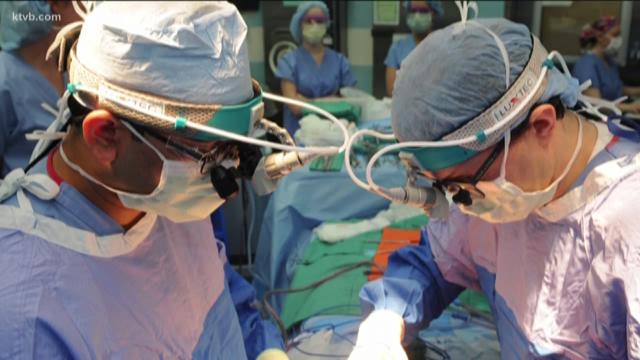 MERIDIAN, Idaho — In 2015, KTVB brought you the story of Meridian wife and mom of three, Melinda Nelson, who was born with a disease that made it impossible for her to eat.

“I was born with a rare disease called pseudo-obstruction syndrome, and what that means is your body cannot digest your food properly, your intestines cannot absorb nutrients. I spent a lot of time in hospitals, I was fed via a central line," Nelson explained.

When she was 39, Nelson’s body was beginning to fail her. Her only option was a dangerous five-organ digestive system transplant. She needed a new stomach, liver, pancreas, small intestine, and colon.

Nelson found the best surgeon in the country for this type of surgery, but he worked at a specialty transplant hospital in Indiana. That meant Nelson had to move away from her family for months while she waited for a donor, and recovered from the transplant.

“With my three kids, and one of them having special medical needs, it was quite the challenge for me to be gone and live so far away, my husband had to pick up the slack and be the provider. He was the dad, the mom, the nurse to take care of my daughter,” Nelson said. “He did it all and did an amazing job. I stayed in touch via Skype, we'd call, we'd video chat.”

Being away from her husband and kids was tough, but nothing prepared her for what happened when she got the call that a donor had been found and she was going to get her transplant.

“It was the hardest phone call I ever made. I got the news that they had organs, and we life-flighted to the hospital. I was so excited that I was getting organs, but I was so terrified, just full of fear. I called my husband and said this is it, I'm going into the O.R., and I remember thinking this might be the last time I talk to him. I thanked him for the man that he was, and I had him go wake up my kids,” said Nelson through tears. “I told them I loved them, and I was trying really hard to be brave, and not start crying because I knew if they heard mommy crying and knew how scared I was that they would be fearful too. I just spoke to each of them and told them how lucky I was to be their mommy.”

Incredibly, Nelson survived the risky surgery and months of recovery. After recovering from the transplant, Melinda she was able to eat for the first time in her life.

She said it’s been a learning curve, just figuring out how to eat like a regular person. She now says she enjoys small meals through the day but does use a feeding tube connected to her stomach to supplement her meals and keep her weight up.

Nelson says she will forever be grateful to the person who saved her life, her donor. She has connected with his family.

“I actually do know who my donor is, his name is Michael and he was 22-years-old. I received his stomach, liver, pancreas, small intestine, and colon. His mom says he was always the kind of person who would give you the shirt off his back, he was always helping others,” said Nelson. “He has a son of his own. So, I hope one day I'll be able to meet his son when he's older, and thank him and tell his son how much of a hero his daddy is.”

Nelson says she has wasted no time on her new lease on life since she’s been home in Idaho. She’s back to being a mom and a wife, and she says she found a new calling. Something she’s very passionate about, sharing her message of hope with other transplant patients.

“Right now, I'm currently speaking, I teach workshops, I’m also working on writing a book. This past year was really great because I was able to not only go back to Indiana for my checkup, but I also was able to speak and help other transplant patients. I got to pay it forward,” said Nelson.

Melinda Nelson’s biggest inspiration is her little girl. Hannah is 10-years-old now, and also suffers from the pseudo-obstruction syndrome. Just like her mom, Hannah isn't able to eat, she is fed through an IV for twelve hours a day, mostly while she sleeps. Nelson wants her daughter to know she can tackle anything this disease throws at her.

“I went back and did this transplant to show Hannah that there are hard things in your life that are going to come up, but you can do hard things,” said Nelson. “I went through this surgery first, and if there is a time that she needs this surgery, I can be there to support her not just as a mother but as a patient.”

For now, Hannah Nelson is not letting the idea of a transplant in the future slow her down. She’s too busy being a little girl and enjoying life.

“I don't worry about that right now since I'm just a kid,” said Hannah Nelson.

Melinda Nelson says she and her daughter will cross that bridge when they come to it. For now, she is determined to live a long life for her kids and provide hope for other transplant patients.

“I just feel extremely blessed and grateful to have a second chance at life. you know?”

For more information on Melinda’s journey, check out her Facebook page.