A Lakeville family wants answers after their 14-year-old suffered a serious brain injury at school. 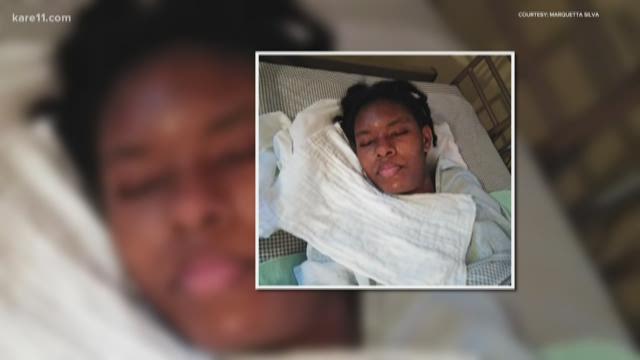 LAKEVILLE, Minn. — Marquetta Silva says every single day since April 16 it has been a struggle for her 14-year-old daughter Aaliyah Bowen.

“As it is right now, Aaliyah's needs are greater than a newborn,” Silva said, describing what doctors refer to as a permanent vegetative state. "What she needs now, only God can do.”

Silva, along with Aaliyah’s father, Kenyetta Bowen, spoke to KARE 11 for the first time since filing a $10 million lawsuit against Lakeville Area Schools.

According to the lawsuit, the family alleges that Aaliyah sought help for an asthma attack at Lakeville's McGuire Middle School. The complaint claims the nurse "failed to properly treat" and "instead instructed (Aaliyah) to report to physical education class."

After returning to gym class, Bowen "lost consciousness and was oxygen deprived for approximately thirty minutes. Tragically, she sustained a catastrophic and permanent brain injury and remains in a persistent vegetative state," according to the complaint.

"The facts will come out,” Kenyetta Bowen said. “We're not worried about that right now. What we're worried about is getting help for her."

Lakeville Area Schools issued a statement in response to the lawsuit:

“Lakeville Area Schools are deeply saddened by the medical incident regarding one of our students last April. We express our deepest sympathy for the student and family. The district takes student health seriously and abides by medical protocols and emergency response procedures. It is our position that the Lakeville Area Schools are not responsible for the injuries outlined in the complaint.“

"The statement was appalling to me," Kenyetta Bowen said. "The first day that my daughter was supposed to go to high school, they called and said she was absent, so they were very thoughtful. Then they say, 'We're not responsible.' So who is? Every single parent that has a child that goes to school expects... two things: that they get an education and they come home like you sent them. My daughter, on April 16th, did not come home."

Marquetta Silva says her daughter has been in and out of Children's Hospital since July, but she requires constant care because she can't move or even swallow by herself. As the lawsuit moves forward, she's hoping their go fund me page will help cover the mounting costs.

"We don't have the means to even take care of her," Silva said. "I have to hope that she is going to grow beyond this. The doctors say it's permanent, but how do you wrap your mind around that?"