According to police, the building was vandalized Monday with anti-police graffiti and a threat to burn the building down. 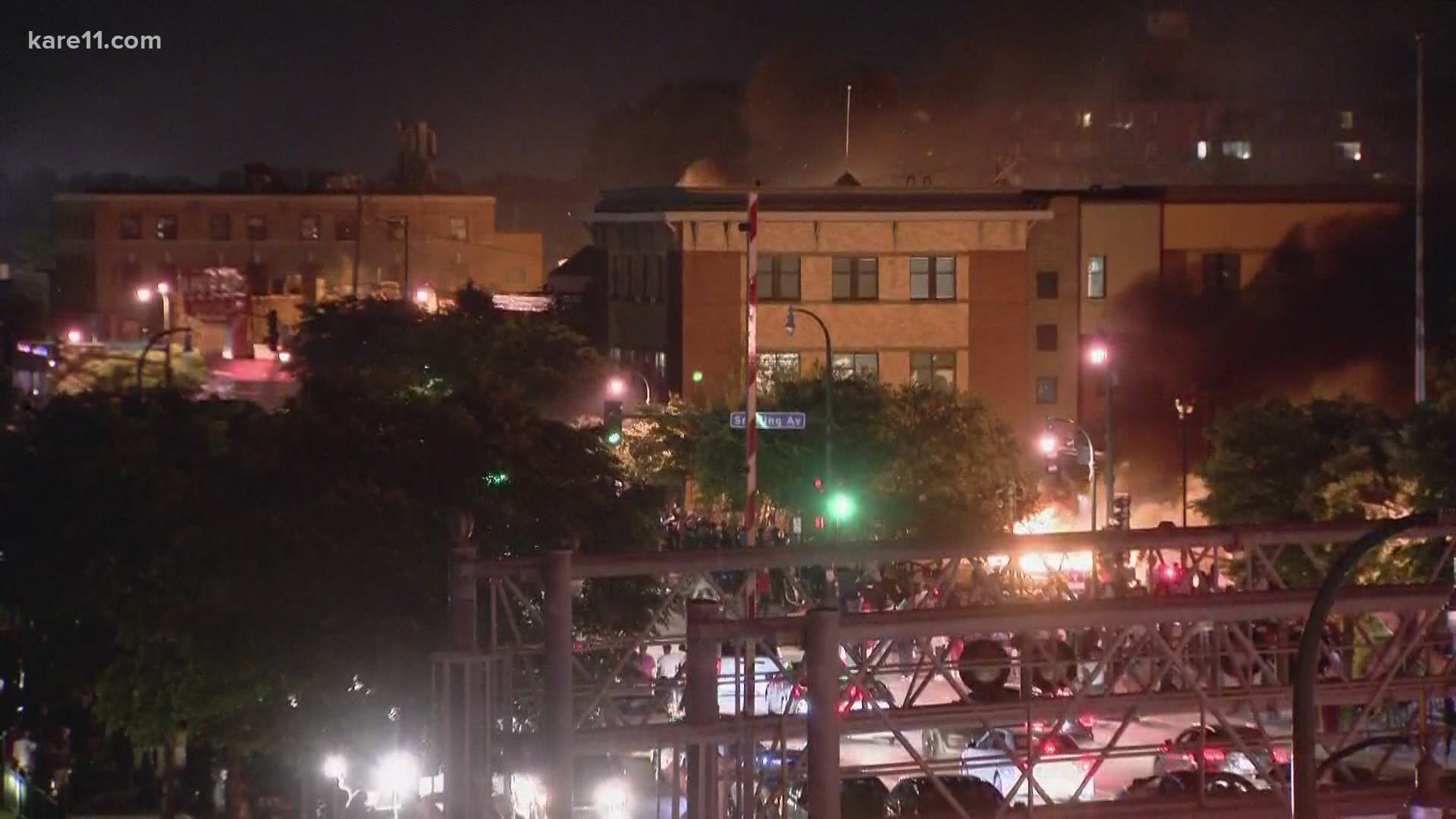 MINNEAPOLIS — A plan to temporarily relocate the Minneapolis Police Department's Third Precinct headquarters to a building on the city's near south side have been scuttled, leaving the city to go back to the drawing board.

Police were hoping to set up shop inside a building at 2633 Minnehaha Avenue after the old headquarters at 3000 Minnehaha was burned down May 28 during the unrest that followed the death of George Floyd in police custody. The proposed lease would have cost the city a reported $4.8 million.

KARE 11 reporter Lou Raguse confirmed Wednesday that the building's owner abandoned the deal after the building was vandalized.

I have confirmed the owner of the building that Minneapolis was going to lease for a temporary 3rd precinct home decided to pull out of the deal after the building was heavily vandalized Monday including threats to burn the building down.

Deephaven Police also said they found out over the weekend that protest groups were planning a drive-by caravan protest past the owner's home in that community, which is under construction. Officers contacted the groups and told them the man does not currently live there. The protest didn't happen.

Then on Monday, MPD said the building on Minnehaha Ave. was damaged and vandalized with anti-police graffiti and messages about burning the building down. As of Wednesday, the building was boarded up.

After that, the owner reached back out to Deephaven police, telling them to notify the protest groups that he is "pulling the plug on the lease."

"The City of Minneapolis and Imagine Express have been in ongoing negotiations over a lease agreement at 2633 Minnehaha Ave." read a release from the city. "The two parties have reached an impasse in the negotiation process and have amicably agreed to cease lease negotiations over this property moving forward."

"Imagine Express has ended negotiations with the City of Minneapolis on their possible sublease of our Minnehaha Avenue property,"  said the property owner in their own statement. "We intend to move in a different direction with respect to the property."

The news will come as a relief for a significant group of neighborhood residents, who had organized a rally for Wednesday night called "Block the Third Precinct block party" in opposition to MPD moving into the building at 2633 Minnehaha. Organizers say the Minneapolis City Council has not done enough to re-imagine policing in the community, and that spending the $4.8 million needed for the lease would be "an investment in a failed system."

The opposition group added that the proposed location, just blocks away from the old Third Precinct, would be a safety risk to neighboring buildings and residents, since "it will be the target of future protest if MPD’s standard practice continues."

"We joined together to insist on no return to business as usual, to call the city to an authentic process of reconciliation, and to hold the city council to their commitment to engage with the community to transform the public safety system in a way that will truly protect all of us," read a statement from jim saliba, a Seward neighborhood resident who helped organize opposition to the temporary precinct location. "I hope we can continue to work together on these larger shared goals beyond the defeat of this lease."

The city of Minneapolis will now go back to the drawing board in their quest for a temporary home for the Third Precinct. An initial search turned up more than 20 properties that were a potential fit, and those remaining on the list may be reconsidered.

"We do not have an alternative site. As Council Member Johnson referred to, time is of the essence. So we will likely go back to the list of properties that we had contacted previously. And as discussed in committee we may need to go look at properties that are outside the boundaries of the precinct at this stage," said Mark Ruff, Minneapolis City Coordinator.

Council Member Andrew Johnson said that he does not see a conflict between choosing a temporary site and achieving deep changes in policing that the protesters want. He said the city could add conditions to the lease to keep moving forward on those goals.

"I certainly hope we can find a temporary location that can work sooner than later for our employees. I don’t see that as something that’s optional, providing a workspace for our city employees who are out there. It’s a temporary workspace. They are continuing to respond to 911 calls and service the area, and I don’t see any of that as being in conflict with our larger public safety work. In fact, I see approving a lease with conditions as an opportunity to advance that work," Johnson said.