School officials confirmed a student fired a gun several times in the hallway Monday morning and was taken into custody. 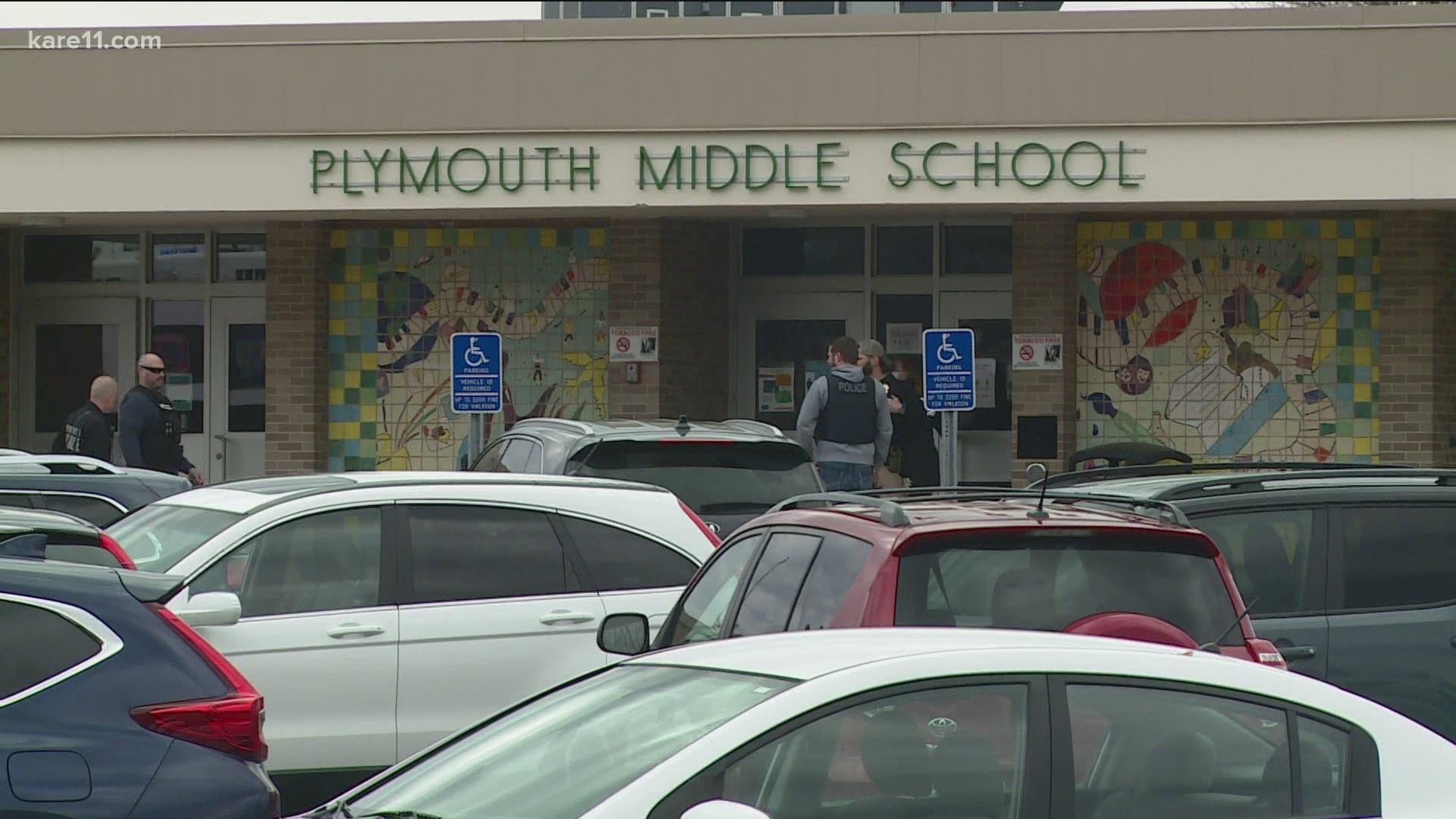 PLYMOUTH, Minnesota — Plymouth Middle School went into lockdown Monday morning after a student fired a loaded handgun into the ceiling of a hallway, according to the school district. The city's police chief says no one was injured.

Police responded to a report of shots fired at the school at about 8:44 a.m., Police Chief Erik Fadden said Monday.

Robbinsdale Area Schools Superintendent Dr. Stephanie Burrage said in a press statement that the student who fired the weapon was taken into custody, without further incident. Police aren't looking for any additional suspects.

Burrage confirmed during a press conference Monday morning that the shots were fired from inside the school by a student. Chief Fadden added that officers did not use force when responding to the incident. The student's identity has not been released.

Multiple shots were fired in a hallway outside a bathroom, and several students witnessed the shooting, according to the superintendent. She said during Monday's press conference that the first person to respond to the shooting was a staff member, followed by a school resource officer.

"Our district takes every weapon-related incident seriously," Burrage said. "We are cooperating with law enforcement and also conducting our own investigation."

A student was identified as person with the gun. The first person on site was a staff member. Says district crisis team was here immediately. @kare11 pic.twitter.com/9rTWcut0Kg

When asked whether or not the student said anything before firing a gun inside the building, both police and school officials said they didn't have any details and are still in the early stages of the investigation.

According to a press release from the school district, Kim Royston, the school's assistant principal, was the first administrator in the area, but didn't disarm the student. When the Plymouth Police Department, staff and school resource officer encountered the student, they were unarmed and compliant, officials say.

“Yesterday was one of the most difficult days of my career as an educator,” said Royston. “Everything happened so quickly, that I didn’t have time to think about what I would do. I saw the gun, I instructed him to drop it and ran to the spot where the shots had been fired. I’m so thankful that no one was hurt.”

The Hennepin County Sheriff's Department is assisting in the investigation.

The superintendent said the school remained on lockdown for the rest of the day, and there will be a "visible police presence." She said there's no threat to any other district school.

Families were asked to pick up their students at the east parking lot of Armstrong High School.

Plymouth Middle School students about to be reunited with their parents. @kare11 pic.twitter.com/54Bz9PJJjJ

Burrage also thanked families, school staff and police for their help as the investigation continues.

"It's not a fun day for anyone that has to manage a gun in a school," she said. "But we all worked together and we will make sure that we have a positive outcome from this incident today."

She reminded families that each school has a team of counselors, psychologists, social workers and others who can help students process the experience.

"When the time is right, please take a moment to talk with your student about school safety," Burrage said. "It's critical that students understand the importance of reporting unsafe situations to an adult staff member immediately."

The school also announced that Tuesday will be a distance-learning day "in an effort to allow both families and staff the space and time to process the events of today." Wednesday was already dedicated to online learning.

OTHER NEWS: Pursuit ends in crash on I-35W in Bloomington