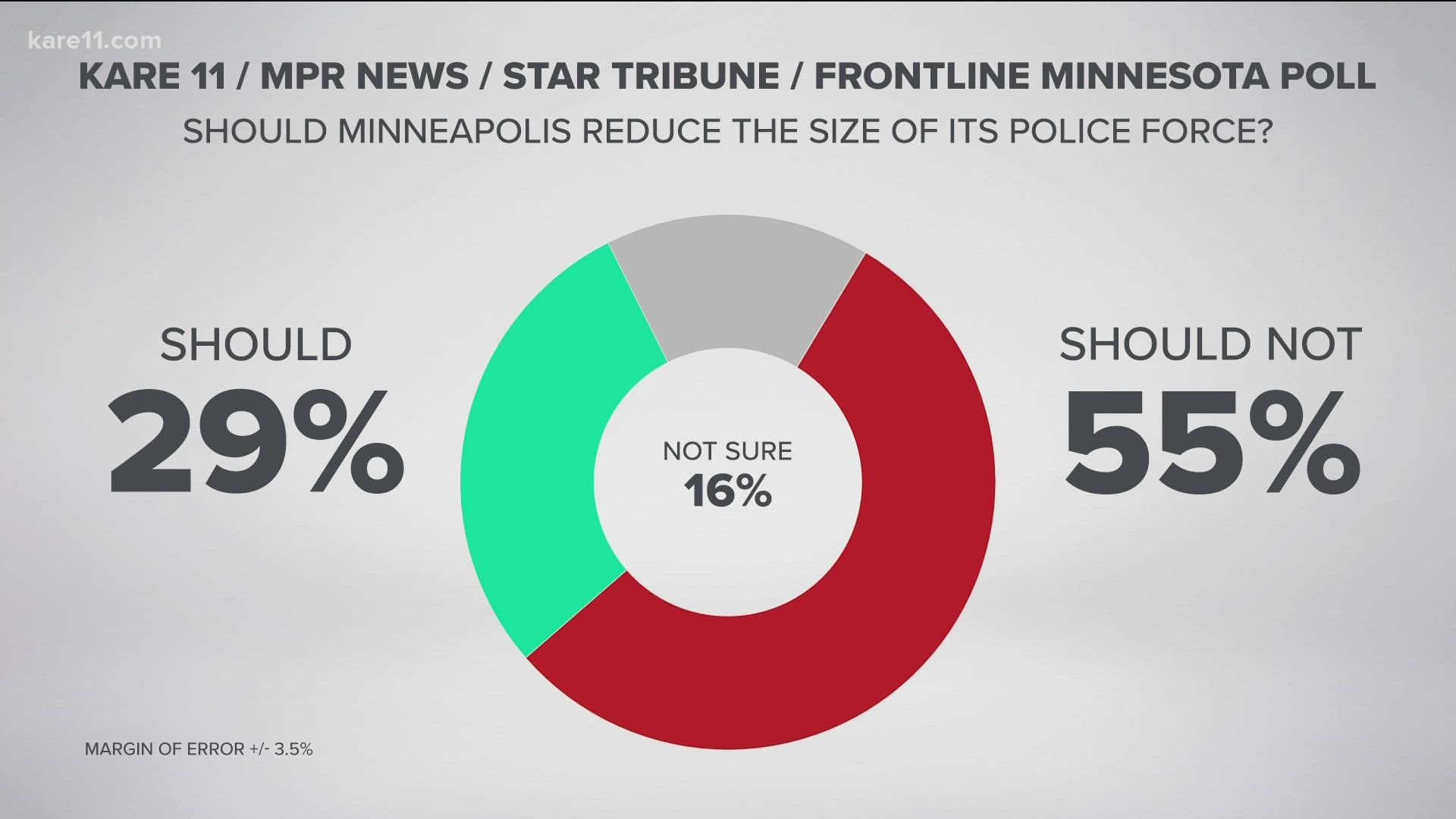 MINNEAPOLIS — Minneapolis voters are generally split on whether or not they want to replace the city's police force with a new Department of Public Safety, according to results from a new KARE 11/MPR News/Star Tribune/FRONTLINE Minnesota Poll.

In the aftermath of George Floyd's death and heightened nationwide awareness around police brutality, a vocal coalition called for the Minneapolis Police Department to be replaced with a department overseen by the city council. On Sept. 17, early absentee voting opened to Minneapolis residents for the city's Nov. 2 Municipal Election, where voters are being asked to weigh in on the future of the police force.

SHOULD MINNEAPOLIS REPLACE THE POLICE DEPARTMENT?

According to a new KARE 11/MPR News/Star Tribune/FRONTLINE Minnesota Poll conducted before early voting began, 49% of Minneapolis voters support replacing MPD with a new policing model that may include officers, but also focus on public health and give the city council more authority over public safety, while 41% of voters oppose the idea and 10% are undecided.

The poll, conducted by Mason-Dixon Polling & Strategy, interviewed 800 registered likely voters in the city of Minneapolis between Sept. 9-13. The citywide poll has a standard +/- 3.5% margin of error.

The most stark contrast in opinion is seen based on party affiliation. According to the poll, 55% of DFL/Democratic voters in the city support replacing MPD with a Department of Public Safety, compared to just 7% of Republicans. Forty-four percent of voters who identify as Independent/Other support the change.

"There’s no reason why we can’t achieve a lot of the same goals that amendment puts forth with the existing structure that we have. And that’s on the council," said poll participant Chris Hewitt, who opposes the charter amendment. "It’s going to take the right people in place within the council, within the mayor's department."

"You might as well try something new if what’s been there hasn’t been working," said poll participant Adrienanna Bettie, who supports the plan. "I mean I appreciate the police. (But) a push towards something more. Something more cohesive, that addresses not just one problem, which is the crime, but it addresses the mental health issue."

SHOULD MINNEAPOLIS REDUCE THE SIZE OF ITS POLICE FORCE?

As part of the survey, Minneapolis voters were also asked to weigh in on whether or not they think the city should reduce the overall size of its police force. Citywide, just 29% of voters said they should, 55% said they shouldn't, and 16% weren't sure.

More white voters support reducing the size of the force than Black voters, but there wasn't a majority among either demographic, 33% compared to 14%.

Again, the Minneapolis Police Department found strong support among Republican voters, who overwhelmingly opposed cutting officers. Seventy-nine percent of GOP voters surveyed said the size of the MPD shouldn't be reduced. Still, more than half of Democratic and Independent voters agreed that the force shouldn't shrink, 53% and 57% respectively.

Across all the demographics surveyed, age, gender identification, race, education level and party affiliation, voters were generally in agreement that shrinking the department would come with negative impacts.

Republican voters in Minneapolis had the strongest response against reducing the size of the MPD, with 79% saying the impact would be negative, and just 9% saying it would be positive. The most support for reducing the size of the MPD came from voters ages 35-49 at just 25%. Half of the voters in that age group still agree cutting officers would negatively impact public safety.

In a statement released in August, Minneapolis Police Chief Medaria Arradondo came out against a plan to replace the MPD with a Department of Public Safety. "If the current city charter amendment to the reporting structure passes... it would not just be confusing--it would be a wholly unbearable position for any law enforcement leader or police chief," he said.

Arradondo also has strong support among Republicans (60%), Democrats (59%) and Independents (46%).

The Minneapolis Police Department overall, however, is significantly less popular. Citywide, only 33% of voters said they have a favorable opinion of the department, 53% said unfavorable, and 14% said they had no opinion.

The MPD has strong backing from Republican voters, the only demographic to respond to the survey with an overwhelmingly positive opinion of the police: 85% said they favor the department, compared to 27% of DFL/Democratic voters and 33% of Independent/Other voters.

The older voters get, the more likely they are to have a positive view of the department, but in none of the age groups surveyed did the majority of voters have a positive opinion of the MPD. Young voters ages 18-34 reported the lowest favorability rating at 28%, while 37% of voters 65 and older said they have a favorable opinion – the highest of any age bracket.

Across the board, Minneapolis voters agree on one thing – the opinion that crime has increased in the city over the last few years. Among all those surveyed, 73% think crime has increased, 25% think it's stayed the same, and 2% aren't sure. Poll results show that a majority of voters in every demographic surveyed believes crime is on the rise, between 68% and 81% in all groups.

The findings of this KARE 11/MPR News/Star Tribune/FRONTLINE Minnesota Poll are based on live interviews conducted Sept. 9 to Sept. 13 with 800 Minneapolis registered voters who indicated they are likely to vote in the November city election. That sample included interviews with 537 self-identified white registered voters and 157 African-American registered voters. During the same period, an additional 343 interviews were conducted with African-American registered voters in Minneapolis who indicated they are likely to vote in November, for a total of 500 interviews. This is commonly referred to as an “oversample,” and allows for an apples-to-apples comparison of the responses of white voters and Black voters, with similar margins of sampling error. The findings of this oversample appear under “Black voters” in the data tables, but these additional interviews are otherwise not included among the main sample of 800 Minneapolis registered voters. Other racial demographics are not included in the poll question data tables due to the small number of interviews conducted. This poll was conducted for the KARE 11, Minnesota Public Radio News, Star Tribune and FRONTLINE, the PBS series, by Mason-Dixon Polling and Strategy Inc.

Sampling error does not take into account other sources of variation inherent in public opinion surveys, such as nonresponse, question wording or context effects. In addition, news events may have affected opinions during the period the poll was taken.

The demographic profile of this poll of registered voters is an accurate reflection of their respective voter populations. This determination is based on more than 100 statewide polls conducted by Mason-Dixon in Minnesota over the past 32 years – a period that spans eight presidential election cycles that began in 1988.