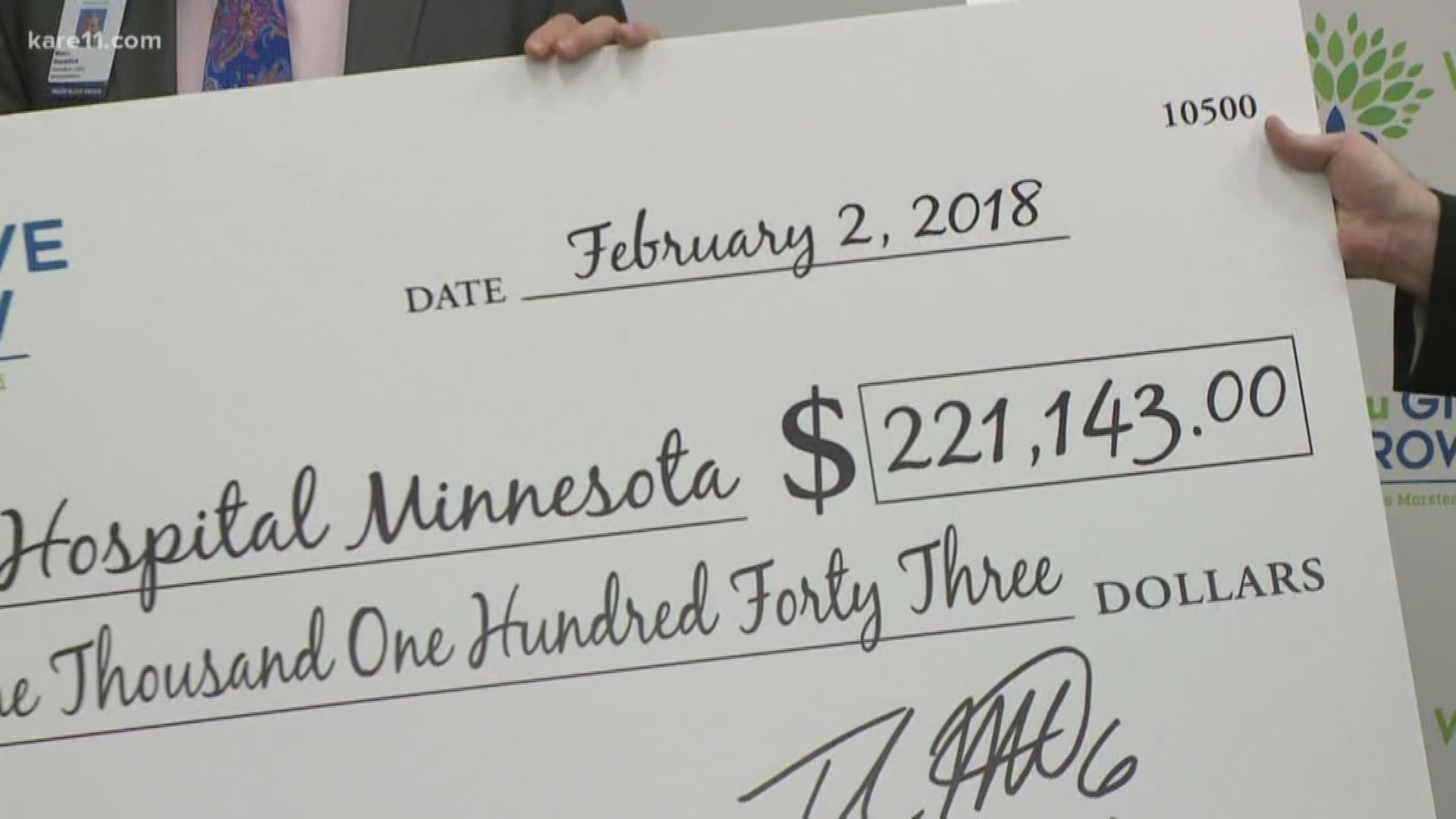 MINNEAPOLIS, Minn. – New Orleans Saints punter Thomas Morstead and Vikings cornerback Marcus Sherels might be going up against each other on Sunday, but they're also joining forces this weekend to keep the spirit of giving going far beyond the generosity sparked by the “Minneapolis Miracle” earlier this year.

You may remember when Vikings fans flooded Morstead's own foundation, What You Give Will Grow, joining in to raise more than $220,000 last January, when a Vikings fan noted Morstead’s sportsmanship in a post on Reddit.

Morstead came back on the field for the point after the touchdown, even though he was injured in a tackle from Sherels, and his team lost after the "Minneapolis Miracle” touchdown.

After donations from around the country poured in, Morstead and What You Give Will Grow presented a check for $221,143 to Children’s Minnesota’s Child Life program during the week of the Super Bowl, but he wanted to do more for the state that showed him an example of “Minnesota Nice.”

Morstead and Sherels are now encouraging fans to support Best Christmas Ever, a Twin Cities based nonprofit organization, by making a donation.

After this weekend’s matchup, the winning team’s market will receive 60 percent of all donations to its respective city, while 40 percent will go to the remaining area. Best Christmas Ever is a nonprofit organization that works with community partners to lift up families who have fallen on hard times through no fault of their own by giving them the "Best Christmas Ever."

DONATE: Give to Best Christmas Ever

Morstead met Best Christmas Ever founder Jason Kunz while in Minneapolis last year after he delivered the donations to Children’s Minnesota.

“That Minnesota nice thing is real, I hadn’t truly experienced it, that was the most surprising part of everything,” said Morstead. “This is my turn to do something nice and my wife and I feel obligated to say thank you, so we are happy to do it.

"it’s almost like it puts us in a place like what else is possible, we started small, a couple of friends who wanted to make an impact. This amazing snowball effect rolls into this year and we are going to make a significantly broader impact due to Thomas’s generosity,” said Kunz. “Generosity inspires generosity and Thomas is a perfect example of that.”

Morstead plans to bring Best Christmas Ever to New Orleans for the first time and plans to brighten the lives of six families for the holidays. Each family receives upwards of $10,000 of life-changing gifts, Kunz said.

“The most exciting part will be sharing the stories of the families we end up blessing this Christmastime,” said Morstead. “It’s like voting, some people feel like what does my vote count, what does my dollar count? It’s doing what you can do in your own little way, and every little person believes their little piece can be impactful, all those little pieces add up.”

Fans can also sign-up to receive updates about Best Christmas Ever in New Orleans by visiting http://info.wygwg.org/bcesaintsvikings and will be sent a notification when nominations are open.

In 2017 over 700 nominations were received and 100 families received the Best Christmas Ever. The organization began in 2010, inspired to give after a single father with ulcerative colitis struggled to give his family the holiday they deserved. Kunz said his organization has a goal of helping 200 families across the US in 2018.