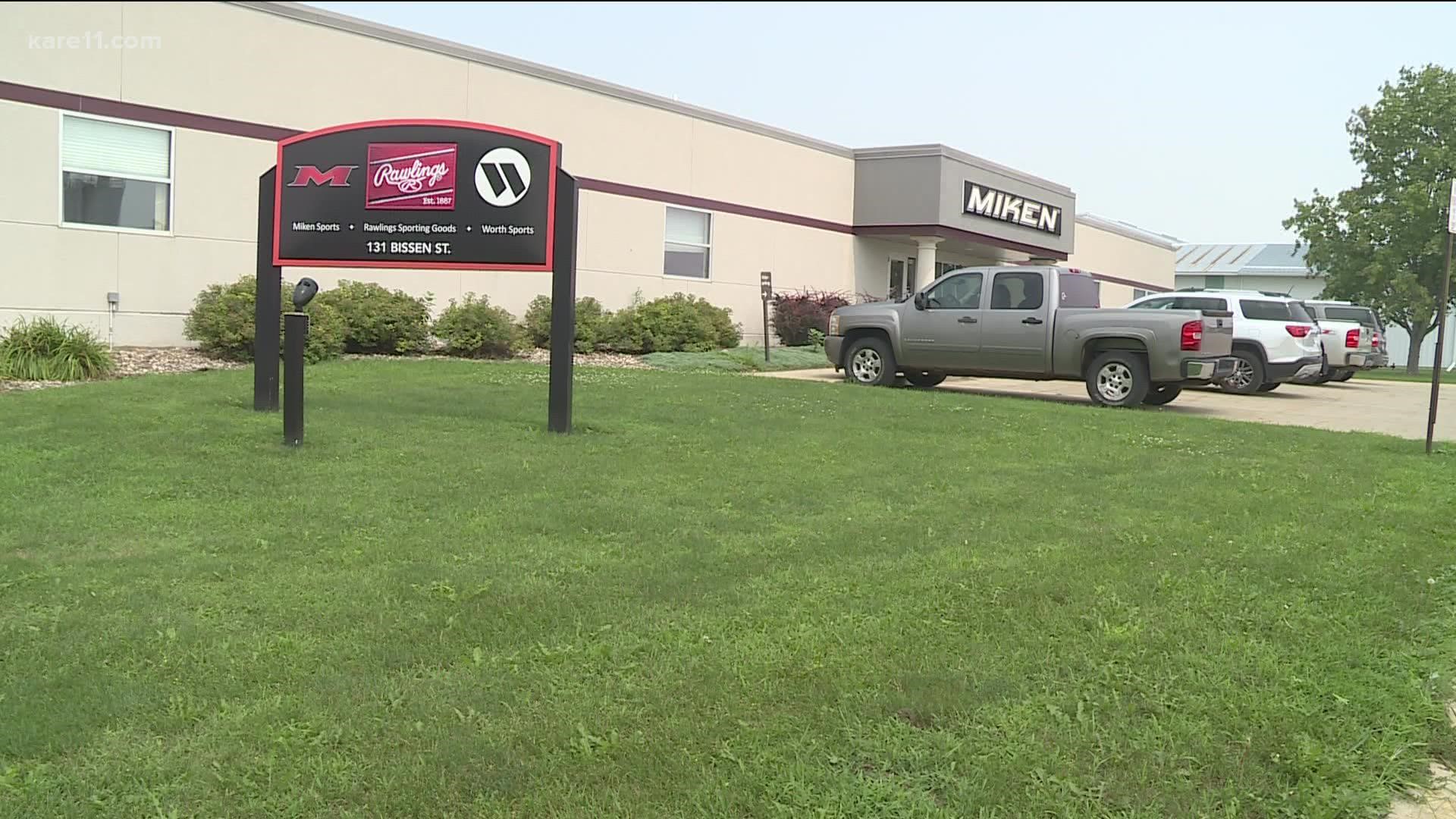 CALEDONIA, Minnesota — State and local leaders are asking Major League Baseball and Rawlings Sports to reconsider a decision to move jobs away from this small city in southeastern Minnesota.

The Miken Sports plant has been cranking out sporting gear since 1999, including batting helmets for MLB teams, hockey sticks and composite bats used in softball. Rawlings informed workers that the plant will be phased out over the next 18 to 24 months because that production will be moved elsewhere.

“Last week one day we had a conference call with one of the guys from Rawlings and he basically said we had a lot of discussion over it and just made up our mind the best way to go was to go to China,” Mayor DeWayne “Tank” Schroeder told KARE.

“So, that’s about all we can do is keep pushing, hope they change their mind.”

The plant employed more than 100 people before the COVID pandemic, but currently has a workforce of between 60 and 80, according to the mayor.  According to a Rawlings Group press release, the MLB helmet production is being moved to another Rawlings plant near St. Louis. The softball bats – the bulk of the work at the Caledonia plant – will be made in China.

Mayor Schroeder was one of several local officials who took part in a Zoom press conference Thursday with US Sen. Tina Smith and Minn. Senator Jeremy Miller and Minn. Rep. Greg Davids.

“We understand we’re dealing with a private corporation, but what we can do is try to influence that decision and also remind people about what a great place Caledonia is and the quality of the workforce there,” Sen. Smith told reporters, via Zoom from Washington.

The Miken plant is owned by Rawlings Sporting Group, which is co-owned by MLB properties and the Seidler Equity Partners, which was co-founded by Peter Seidler, who also owns the San Diego Padres.

Sen. Miller said that he and Rep. Davids had pressed the company to look for ways to save the jobs. Miller said a Rawlings representative told them the company will save $4 to $10 million per year by consolidating operations in Missouri and China.

“The quality of the work force and level of the work ethic should be enough to keep them in Caledonia, Minnesota,” Sen. Miller remarked.

Rep. Davids said he was perplexed by the news.

“Think about that – the American pastime is moving to China. Really?”

Houston County Commissioner Bob Bush said it would be a major blow for the local economy and tax base to lose those jobs.

“It’s sad to see them go. We have got good employees. It’s a quality product we made for them,” Bush explained. “I mean Major League Baseball uses their helmets.”

His fellow commissioner, Eric Johnson, said the plant employs people from throughout the county. During times of high production times even people from neighboring Iowa.

Clifton Campbell was among the Miken workers who left the plant Thursday afternoon when their shift ended. He said the local Rawlings management has tried to make the best of the situation.

“They’re giving us at least 18 months here, some incentive pay, and severance pay at the end, but it’s still a tragedy.”

Campbell said he’s very near retirement but worries about the plight of the younger workers.

“People need good jobs. They need jobs to stay here. We don’t need them to go overseas. As a country we’ve got to draw the line in the sand and say we need to stay here and give our people the jobs they deserve.”

Rawlings executive Mike Thompson told KARE only about five positions are connected to the helmet manufacturing process. That's being moved to the plant in Washington, Missouri that currently paints the team logos on the helmets that come from the Caledonia facility.

The decision to switch bat production to China came about as the result of a corporate acquisition. Rawlings acquired Eastern Diamond Sports, a company based in California that already owns a larger scale bat plant in China.

"This acquisition came with a world-class plant in China that can produce far more bats than we've been making in Minnesota. So, from a business standpoint it make more sense," Thompson said.

"Closing Caledonia was a painful decision, and was not easy to make because there are some really good people at the center of it."

He said the company will keep a small number of sales, marketing and customer service employees in Caledonia.  And, Thompson noted, Rawlings Sports is still heavily involved supporting youth baseball and softball in Minnesota, and has alliances with many universities and colleges in this state.