District menus are changing constantly based on availability, which is due to supply chain problems brought on by the pandemic. 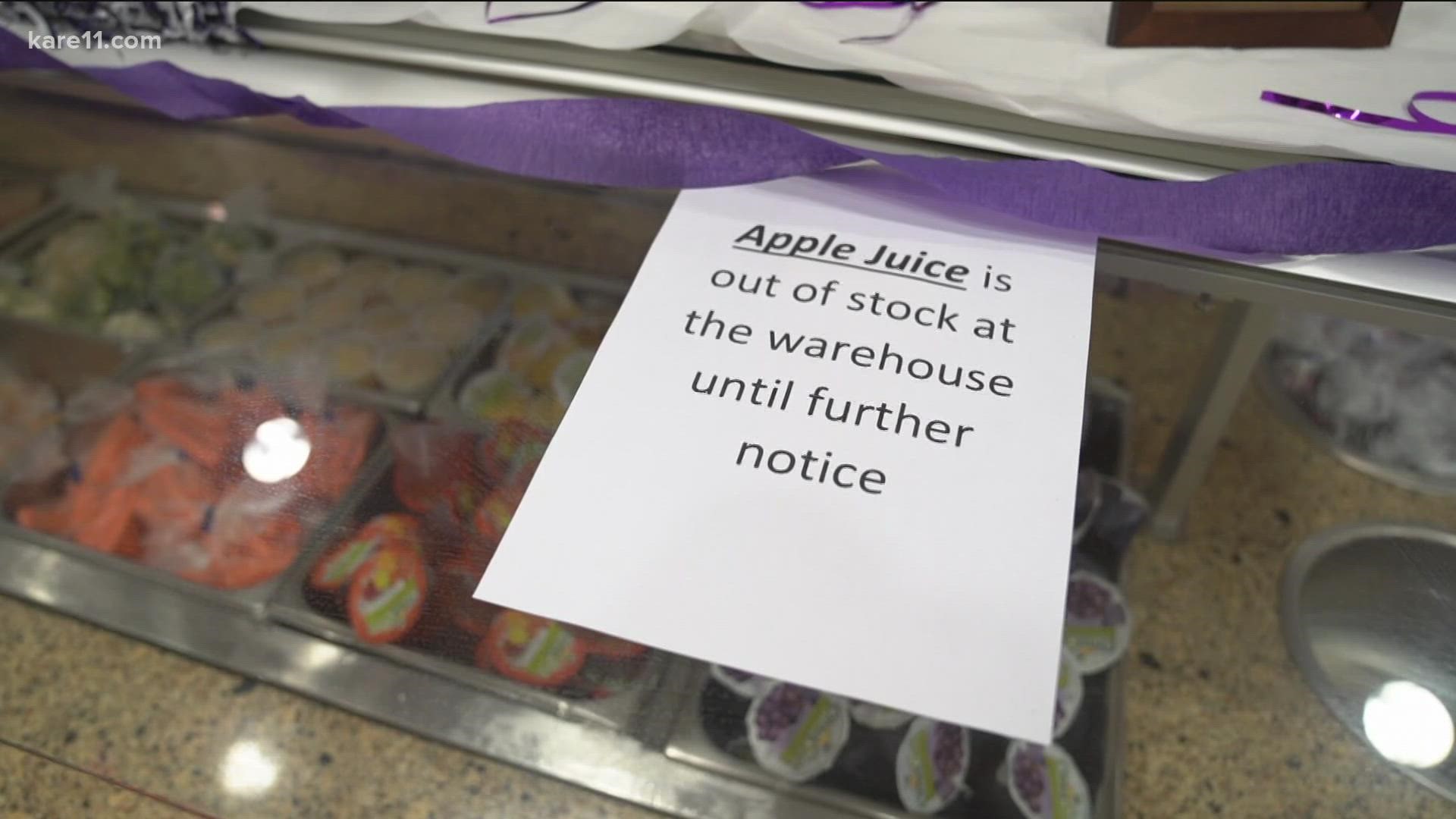 RED WING, Minn. — A crush of youngsters invaded the lunch room at Red Wing High School on Thursday at precisely 11:45 a.m., lining up by the dozen for a chance to grab tacos, barbeque sandwiches or pizza.

Normally one of the highs of a student's day, the lunch hour, has now become one of the most challenging aspects of the pandemic for a variety of reasons, including staff shortages and major supply chain disruptions that have left districts like Red Wing changing their menu on a week-by-week basis. On Thursday, for example, a sign in the high school lunch area informed students that apple juice was unavailable due to unprecedented shortages.

Brent Lexvold, the director of Student Nutrition Services for Red Wing Public Schools, called this year the "hardest of my career."

"It's not just one particular item that we're out. It's quite vast," Lexvold said. "It's things like snack crackers, graham crackers, cereal bowls. We've seen some decreasing production on chicken as well. Naturally, on some of those items we've seen price increases, that natural supply and demand. And we are seeing some shortages on disposables."

Lexvold said the district must adjust its menu based on availability from vendors, who are scrambling to find many of these products due to the well-documented global supply chain problems brought on by the pandemic. In some cases, Lexvold said, the district has been unable to secure certain spices, forcing them to abandon some types of meals altogether.

Supply chain disruptions have been a nightmare for school meals this year. Menus are changing constantly based on availability.

We visited Red Wing High School today to chat with nutrition services head Brent Lexvold, who calls this year the "hardest of my career." @KARE11 pic.twitter.com/9dvajBS3kK

Red Wing's food shortages are emblematic of a much larger problem felt by districts across the United States. With many students returning to full in-person learning this fall, 97 percent of school meal program directors reported in a recent survey that they're "concerned about continued pandemic supply chain disruptions." Sixty-five percent of the directors, according to the School Nutrition Association's survey, described this as a "serious concern."

Daron Korte, assistant commissioner for the Office of Student Support Services at the Minnesota Department of Education, confirmed that many districts across the state are experiencing the same issues.

Districts face different challenges based on their location. Smaller, rural districts don't typically have as many vendor options to work with, whereas larger districts have more students to feed.

But the impact has been widespread, prompting action from the U.S. Department of Agriculture, which administers the school nutrition program. The USDA announced $1.5 billion in federal assistance this week, and it has also increased reimbursement rates to help districts cope with rising food prices.

The USDA also waived menu requirements to give districts more flexibility, since they have no control over the supply chain or shortages impacting their vendors.

"I think USDA recognizes that we're in a real emergency here," Korte said. "It's more important for kids to have meals on their table rather than having to adhere to really strict regulations."

Brent Lexvold, who also works with the Minnesota School Nutrition Association, said organizational leaders have contacted federal lawmakers from Minnesota to inquire about more assistance. For example, Lexvold said, they have asked Senator Tina Smith whether they could explore waiving verification requirements that complicate the process for students receiving pandemic EBT meals.

Lexvold said the USDA's assistance has been extremely helpful already, including the higher reimbursement for meals, which he called a "saving grace."

But until the supply chain disruptions are sorted out, districts such as Red Wing may have to keep shuffling their menus.

"We're constantly going in, spending a lot of time modifying our online menus. It's constantly changing," Lexvold said. "Just that unknown. Are we going to be in this pattern? Is it going to change?"