City leaders will hold an open house for a temporary greenway in Minneapolis on Sunday. 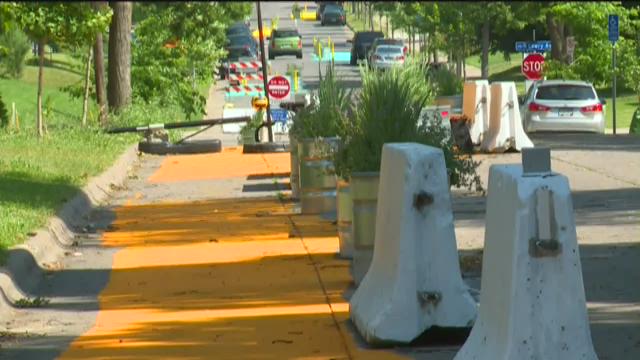 MINNEAPOLIS - City leaders will hold an open house for a temporary greenway in Minneapolis on Sunday.

The greenway is located on the 3000 and 3500 blocks of Irving Avenue North between Folwell and Jordan Parks. Current plans call for it to be in place for up to a year.

Gayle Smiley, who is currently taking chemo treatments to fight cancer, says she has had a negative experience. The road leading to the home she owns on Irving is closed from now until May of 2017. With the installation of the temporary greenway, only bike traffic and emergency vehicles are permitted, forcing vehicles to use the alley.

She’s not alone. LaTonia Jackson has lived on Irving Avenue for 20 years. She fears the greenway will create more harm than good.

“It is not safe. I wouldn’t allow my daughter to play out here. We have parks where people can ride their bikes. This doesn’t make any sense,” she said gazing at the benches and flowers in front of her home.

“I had a graduation party for my son and our family had nowhere to park,” she said.

Mariarty Porter, also against the project, has spent time blogging about her concerns. Some of the upset residents created a petition to have the temporary project removed.

By contrast, Derek Lewis welcomes the change. He said it is a tool that can help slow traffic in the neighborhood.

A spokesperson with the city said motor vehicle traffic, access and parking vary depending on the block. For example, the 3000 and 3400 blocks of Irving Avenue North remain open to motor vehicle traffic but have reduced parking capacity, installation of traffic calming elements, and shared bike-car space. No parking is allowed on the 3500 block of Irving Avenue North except disability parking for vehicles with permits.

The spokesperson also told KARE 11 the city has received some complaints about parking but has had positive feedback.

The city encourages feedback from the community. People can share their input by dialing 311 or leaving a message in mailboxes located near each greenway site. The city will make real-time changes to the temporary greenway route.