Runners returned for an in-person race weekend, culminating in a full marathon that featured about 4,500 participants. 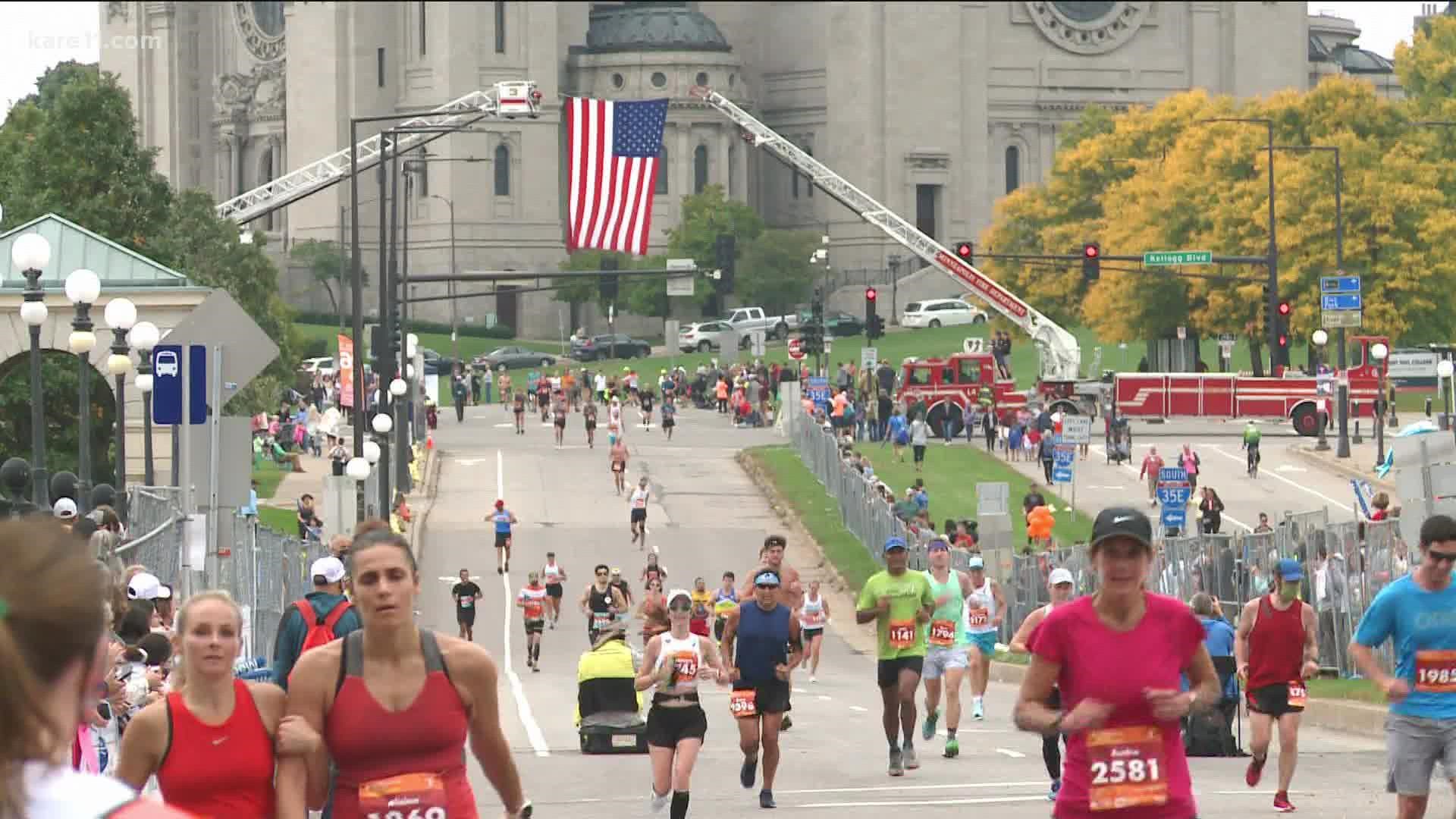 ST PAUL, Minn. — It's the perfect weather for running – and thousands of athletes did just that in the Twin Cities.

After a full slate of Saturday events, runners took off from the starting line at 8 a.m. Sunday for the Medtronic Twin Cities Marathon. Their route started in Minneapolis, looping around the lakes before heading for St. Paul.

Other runners opted for a "shortcut" to the capitol, starting a 10-miler at 7 a.m.

Runner Mohamed Hrezi was the champion of the men's marathon with a new personal best time of 2:15:22, Twin Cities In Motion said.

With a four minute victory margin, Naomi Fulton took home the title for the women's marathon in 2:45:55.

In dominating fashion, your women’s Champion of the 2021 @Medtronic Twin Cities Marathon is Naomi Fulton! With a four minute margin of victory (!), Fulton breaks the tape in 2:45:55. #tcmarathon pic.twitter.com/B8LNO8Dsuo

Two Gopher alums rounded out the women's podium. The 2021 runner-up was Molly Eastman of Victoria, Minnesota -- a former Golden Gopher Cross Country, Track and Field captain. Next was Baily Ness, another Minnesota alum who now lives in Denver.

Here's the full leaderboard for the men's marathon:

And for the women's marathon:

"All these virtual races, when it's all you can do – it's not quite the same," said marathon runner Brad Boleman, who ran with his daughter. "It's exciting to get ready for this."

Organizers said about 4,500 people signed up to compete in the full marathon Sunday. About 8,500 were expected in the 10-miler, with another 4,500 taking on Saturday events.

"It's very comforting to be back here and see all our friends and the community," said Virginia Brophy Achman, the executive director of Twin Cities in Motion. "The fall tradition is back. That's what feels good."

Key changes to the event included half-capacity races and taller fencing at the finish line to prevent people from gathering in big groups.

"To be able to come back, even at half-capacity, is big. We are allowed to be running on the roads, which is a big deal. That means that's more normal, and what we're all used to," Brophy Achman said, "and it allows the community to come watch."

You can watch a stream of the finish line below.