Holding up traffic in the left lane could cost you $125 starting Aug. 1. A new law makes it more clear than ever you have to move to the right to let people pass. 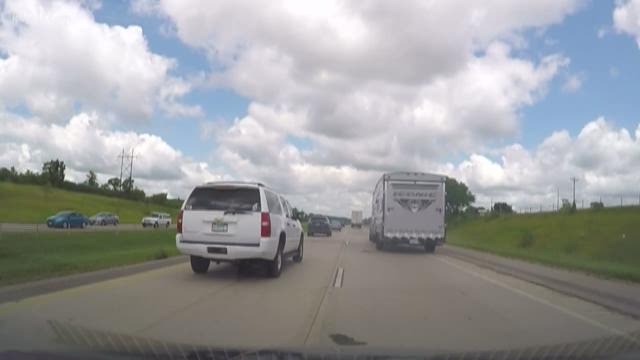 MINNEAPOLIS — It's always been the rule on Minnesota's divided freeways: slower traffic must keep to the right.  It's also common courtesy.

A law that goes on the books starting Thursday makes it clear left-lane slowpokes have to move it on over, or risk a $50 ticket plus $75 in court fees.

"If you’re done passing, get out of the left lane and get back to the right lane as quickly as possible, or as quickly as you can do it safely!"

Col. Matt Langer, Minnesota State Patrol Commander, was quick to point out the new law doesn't make it legal to speed in the left lane or to aggressively tailgate slow drivers.

In fact, Langer cautioned you're much more likely to be ticketed for speeding or tailgating than for being a slowpoke, because people camping in the left lane generally do less harm on the highways than do speeders.

"That person holding up traffic in the left lane can cause problems, can cause frustration, can lead to aggressive driving, but isn’t the contributor to fatal and injury crashes that speeders are."

"It’s not a free-for-all to go as fast as you can, it’s simply to make sure that the flow of traffic, works in the most efficient safe manner."

The chief Senate author of the bill, Sen. John Jasinski of Faribault, said those slowpokes are more of an issue in suburban and rural four-lane highways. His hope is to get more people thinking about the basic rules of the road.

How the law reads

"Upon a roadway with more than one lane in the same direction of travel, a person must move out of the left-most lane to allow another vehicle to pass, when practicable under existing conditions."

Drivers are exempt from the requirement to move to the right, under the following circumstances:

"If you’re preparing to take the left exit, or you just got on from the left, there are many reasons you have to be in the left lane, or during period of congestion, rush hour, there’s many times when you just can’t – logic says you can’t -- have the left lane only for passing," Col. Langer explained.

"That’s why specifically the law says when practicable."