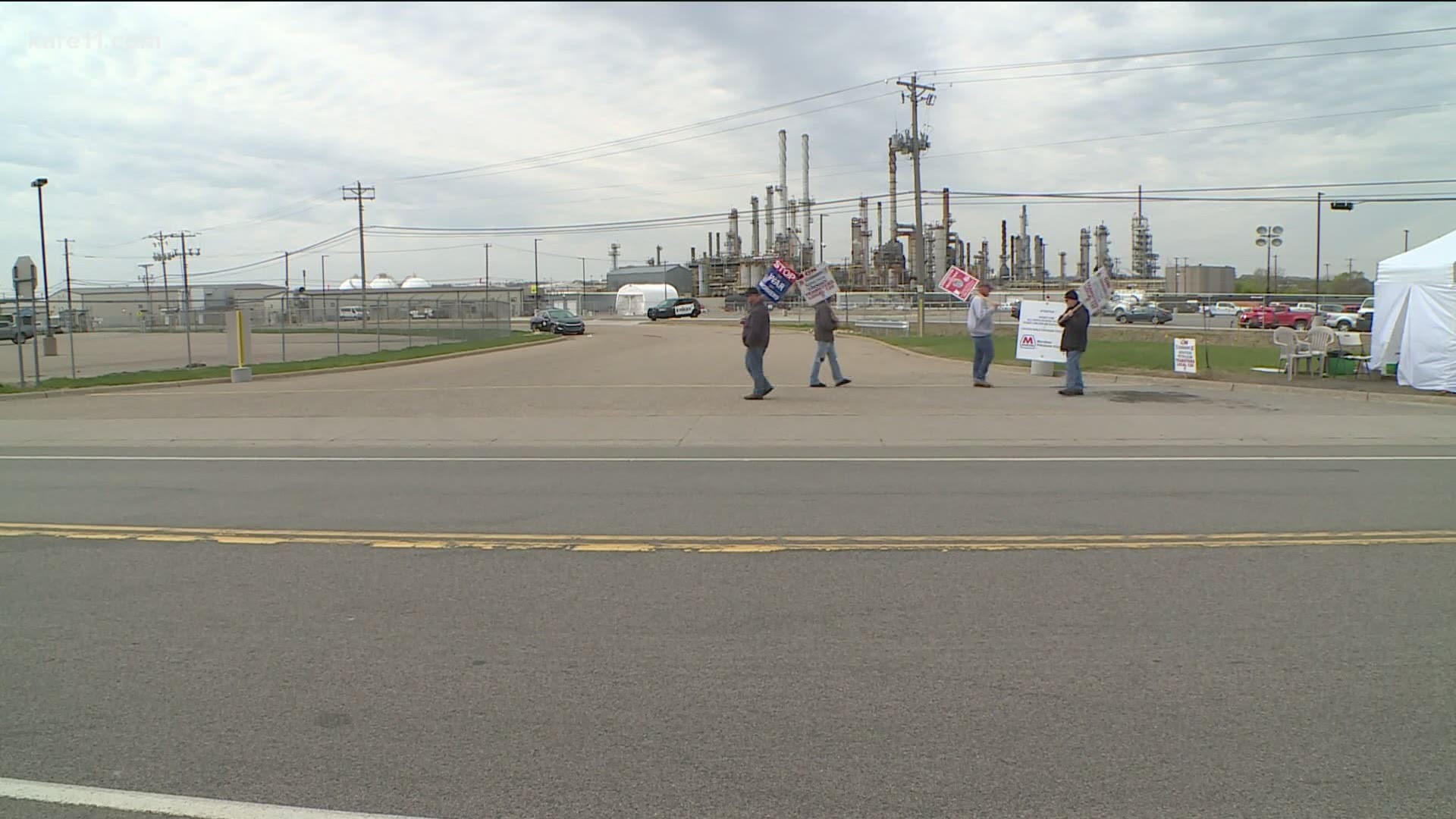 ST PAUL PARK, Minn. — Union workers who've been locked out of the Marathon Refinery in the south metro suburb since January say they're worried about potential safety hazards. In fact, a group of labor unions issued a report this week, sounding the alarm about replacement workers' lack of knowledge and experience.

Marathon says the St. Paul Park plant is operating safely, and the unions are off base with their criticism of how safety protocols are being enforced on the site.  It comes as talks have stalled between the Ohio-based petroleum company and Teamsters Local 120.

Nearly 200 members of that union, which has supplied the operating staff for the refinery, went on an announced one-day strike in January. They informed management they'd be back on the job the next day. When workers returned, they found their passes had been deactivated, and were met with warnings by police they'd be trespassing if they entered the property.

"I've worked here for over 17 years, so I know what it takes," Dean Benson, a Teamster shop steward who was walking the picket line, told KARE Tuesday.

"It takes a lot a time, a lot of experience to know how to safely do a job. Everything that’s really dangerous can be done safely. But you can’t just walk into it and handle it safely if you don’t know what to do."

This week several trade unions working under the banner of Local Jobs North Dakota Minnesota issued a report based on interviews with people who've worked at the refinery as operators or on union contract maintenance crews.

The report, entitled What They Don't Know, detailed union workers claims of spillages that went unreported, their dismay over the reorganization of the refinery's in-house fire crew, and their worries about inexperienced replacement workers.

"I would often see non-union workers walk right through the danger tape that we had put up," Pipefitters Union member Katty Jacobsen told reporters during a new conference Tuesday.

"We were super lucky that nobody got majorly hurt."

Marathon pushed back against those claims, countering that some of the replacement workers are managers who've been supervising union workers. The company said other workers brought onto the site are trained properly for the jobs they're doing and the safety procedures involved.

"We award our contracts based on a comprehensive evaluation process, selecting companies that have exemplary safety records; demonstrate a strong health and safety culture for their employees and concern for our community; practice sound environmental stewardship."

Kheiry also objected to the union's characterization that the safety culture at the refinery had changed for the worse since Marathon purchased it in October of 2018.

"We ensure that employees and contractors alike know that if they feel a task is being performed unsafely, they each have the authority to stop the work in progress until the safety concern is addressed, no matter how big or small the job may be."

The Minnesota Department of Labor and Industry told KARE that MNOSHA, the state's Occupational Safety and Health agency, hasn't issued any citations to the refinery since Marathon took over.  Minnesota law requires any workplace injury that results in loss of life, loss of limb, loss of eyesight or hospitalization be reported to MNOSHA.

Kheiry said the refinery has been cited for one air quality violation since taking over the refinery from previous owner Andeavor. But he disputed some of the violations cited in the union's report, saying those incidents happened before Marathon controlled the plant.

The Minnesota Safety Council gave the refinery a Governor’s Safety Award for Outstanding Achievement in Occupational Safety in 2020 and the company has a sign attesting to that fact attached to the chain link fence near the entrance.

The Teamsters pointed out that citation was given for the plant's safety performance while union workers were still on the site.

"A refinery is a very dangerous place to work," says Matt Foss, a Teamster who has worked at the St. Paul Park refinery for 22 years, as it has changed hands multiple times.

"A small mistake can have catastrophic consequences. Incorrectly handling chemicals can be very dangerous, in minutes it can ruin steel in a chemical fire."

Foss and others pointed out the refinery uses highly toxic hydrofluoric acid, which is one of the reasons he's concerned about cutbacks in firefighter training.

Marathon's Kheiry said the refinery's department is led by an on-site fire chief with two decades of experience in emergency response and refining.