BCA: Man fired weapon before he was shot, killed by law enforcement in Uptown

Investigators say they recovered a handgun and spent shell casings from the man's vehicle. He was wanted on a felony firearms violation. 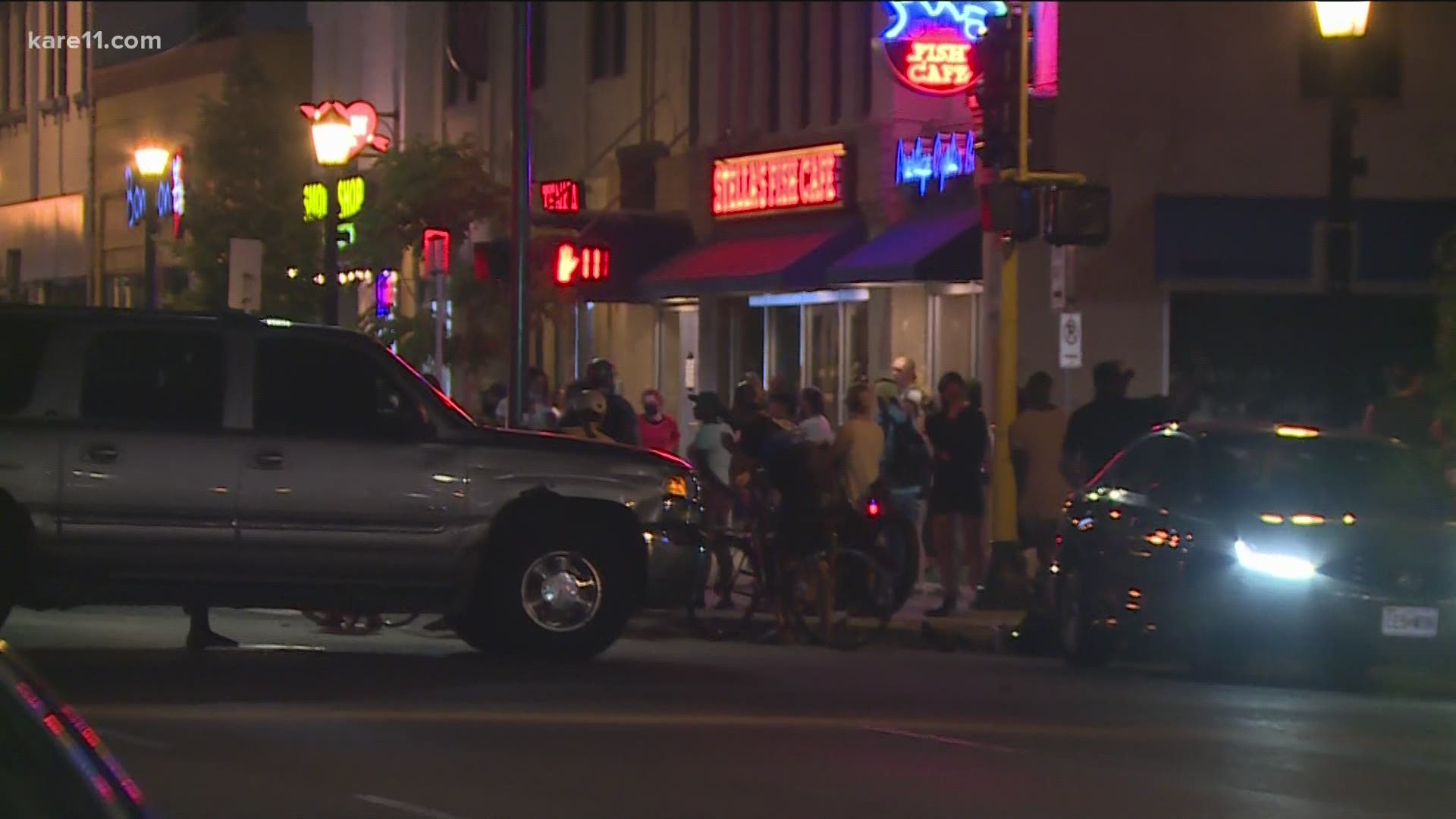 MINNEAPOLIS — The Minnesota Bureau of Criminal Apprehension (BCA) says there is evidence a man fired a weapon from his vehicle before he was shot and killed by deputies in a Minneapolis parking ramp.

A news release from the Minnesota Department of Public Safety (DPS) says the fatal shooting in Uptown Thursday afternoon came after members of the U.S. Marshals Fugitive Task Force located the man and attempted to take him into custody. At that point, authorities say two deputies, one from Hennepin County and one from Ramsey County, discharged their weapons, hitting the man. He was pronounced dead on the scene.

The release says evidence "indicates that the man fired his weapon from inside the vehicle. BCA crime scene personnel recovered a handgun as well as spent cartridge cases from inside the driver’s compartment."

DPS says the man was being sought on a warrant for a felony firearms violation.

Members of the task force were alerted to the man's location and "made contact" with him around 2:10 p.m. Thursday afternoon on the top level of a parking ramp at 1405 W. Lake Street. They then attempted to take him into custody.

U.S. Marshals Service (USMS) spokesman Chief Deputy Michael Fuller said in a released statement that the man was sitting in a vehicle and failed to comply with officers' commands and produced a handgun, at which point law enforcement fatally fired on the suspect.

A 27-year-old female passenger of the vehicle was taken to Hennepin County Medical Center to treat minor glass injuries. She was later released.

The BCA says USMS does not allow officers on its North Star Fugitive Task Force to wear body cameras, and there is no squad camera footage of the shooting. But the U.S. Department of Justice changed its body camera policy in October of 2020, announcing that it would "permit state, local, territorial and tribal task force officers to use body-worn cameras on federal task forces around the nation."

Ramsey County Sheriff Bob Fletcher announced in a press release June 7 that he will now require any Ramsey County Deputy who is federally deputized and assigned to the U.S. Marshals Fugitive Task Force to wear and use a body camera, as does every deputy on his department. Fletcher says an agreement with the U.S. Marshals Service allowed him to make the policy change.

The BCA is still investigating the death. Family members and the Hennepin County Medical Examiner's office identified the man who was killed as 32-year-old Winston Smith.

The Hennepin County Medical Examiner released a report Saturday that said Smith’s manner of death was homicide from “multiple gunshot wounds.” While a homicide ruling by a medical examiner does indicate that a death was caused by another person, it is not a legal confirmation of criminal wrongdoing.

The Bureau of Alcohol, Tobacco, Firearms and Explosives (ATF) St. Paul Division also responded to the shooting to assist the agencies currently investigating.

ATF is responding to an officer involved shooting incident that occurred in the Uptown area of Minneapolis this afternoon and will be on scene in a support capacity to assist investigating agencies.

KARE 11 reporter Deevon Rahming was on the scene of the busy corner near LA Fitness and Libertine restaurant.

Witnesses who live and work nearby told Rahming they heard at least 10 to 15 shots. Community activist groups that work to curb violence were also at the scene.

Rahming reported that multiple law enforcement agencies were on the scene. Vehicles from the Hennepin County Sheriff's Office and the Minneapolis Police Department can be seen. KARE 11's Lou Raguse also reported ATF agents at the scene.

According to Rahming, a crowd of onlookers has also gathered at the scene.

Witnesses who live and work nearby tell me they heard at least 10-15 shots. Community activist groups working to curb violence and deescalate tensions are also on scene. @kare11 pic.twitter.com/XmnnHg1DD7

Crowd is growing as we wait to find out exactly what happened here at the intersection of S Girard Av and W Lake St. @kare11 pic.twitter.com/J6SvcRK9lI

KARE 11's Lou Raguse reported a crowd of about 100 people gathered near Girard Avenue and Lake Street. He also confirmed ATF agents were at the scene.

Witnesses who live here say they heard *a lot* of shots coming from the parking garage. About 100 people present on Lake St right now including nearby residents, anti-police protesters, and organized violence-interrupters.

Minneapolis police spokesman John Elder said in an email to reporters early Friday that some who had gathered vandalized “numerous” buildings and looted in the area. Images and video of a burning dumpster were posted on social media, and windows were shown smashed.

A KARE 11 crew in Uptown Friday morning noticed the CVS Pharmacy was closed and had boarded-up windows.

Editor’s note: A previous version of this article cited an incorrect report that the person killed was a murder suspect who was shot by a deputy. The U.S. Marshals office now says the person was wanted for weapons possession by a felon, and was shot by a member of their task force.

This is a developing story. KARE 11 will post new details as they become available.