In the wake of the disappearance of Mollie Tibbetts, KARE 11 set out to VERIFY a Facebook post being shared warning of attempted abductions and sex trafficking scares in Iowa, Wisconsin and Minnesota. 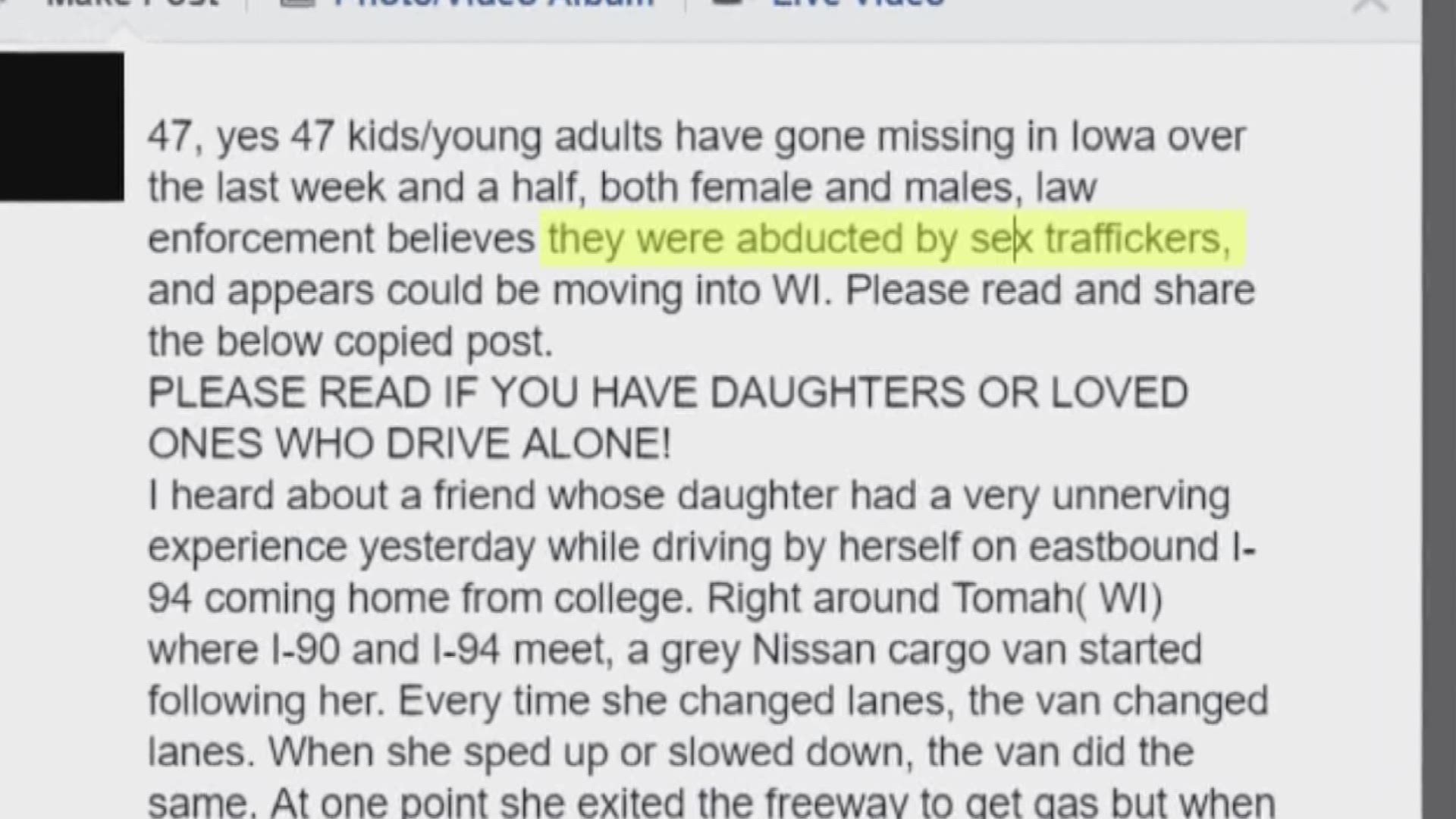 Here is one of the posts:

47, yes 47 kids/young adults have gone missing in Iowa over the last week and a half, both female and males, law enforcement believes they were abducted by sex traffickers, and appears could be moving into WI. Please read and share the below copied post. PLEASE READ IF YOU HAVE DAUGHTERS OR LOVED ONES WHO DRIVE ALONE! I heard about a friend whose daughter had a very unnerving experience yesterday while driving by herself on eastbound I-94 coming home from college. Right around Tomah( WI) where I-90 and I-94 meet, a grey Nissan cargo van started following her. Every time she changed lanes, the van changed lanes. When she sped up or slowed down, the van did the same. At one point she exited the freeway to get gas but when the van exited with her she elected not to stop and got right back on the freeway. But so did the van. She was close to HWY 60 when she finally called me and I had her exited and drive to the State Patrol station in DeForest( WI). She made a very evasive maneuver and exited at the very last minute and fortunately the van was unable to follow. ( the van had been following her for about an hour). She could not get a license plate number off the vehicle because most of the time the van was so close that she couldn’t see the plate. But she did take a picture of the vehicle in her rear view mirror. There were 2 men in the vehicle. Either very tan or Hispanic, both wearing sunglasses. The driver had a large gold watch on his wrist. The State Patrol told her that she was likely the target of sex traffickers. ( a young good looking female traveling alone). Even in broad daylight. She’s rattled, but fortunately safe. The State patrol officers said she should have called 911 while driving. Told them which direction she was headed and what mile marker she was passing. They would have dispatched officers to intercept the vehicle following her and preserve her safety. ( There could have been other girls in the van as well). Please relay this information to your daughters, nieces, cousins, friends etc. Teach the young women/ girls in your life to keep their cool and call 911. And NEVER stop their vehicle if they are bumped from the rear. Keep driving and call 911. ALWAYS CALL 911 IMMEDIATELY IN THESE SITUATIONS. PLEASE COPY AND SHARE THIS AND STAY ALERT!

The first claim we verified: "47, yes 47 kids/young adults have gone missing in Iowa over the last week and a half, both female and males."

Medina Rahmanovic, the head of Iowa's Missing Person Information Clearinghouse, says the statement is likely accurate, but not above average.

"In the last week we probably entered 47 juvenile runaways," Rahmanovic said. "What people don't know is that most of those have returned home after 24 hours."

But instead of referring to the missing juveniles as runaways, the post goes on to make a much more alarming claim: "Law enforcement believes they were abducted by sex traffickers."

Rahmanovic says that is completely false.

"We don't have abducted girls every day in Iowa. It is not a daily occurrence," she said. "We had one person arrested for human trafficking in maybe the last month here in Iowa."

The post goes on to claim that sex traffickers have moved into Wisconsin, describing an incident near the I-90 and I-94 interchange close to the city of Tomah.

KARE 11 checked with the State Patrol in Tomah. They told us they began seeing and hearing about the Facebook post about a month ago but, despite taking calls from several concerned citizens about the post, officers say they have yet to find any reports or calls that match up with the events described.

KARE 11 also spoke to Beth Holger-Ambrose, the executive director of The Link, a Minneapolis nonprofit that helps young victims of sex trafficking. She says they have heard nothing about an increase in attempted abductions in the area, and says the post is based on a largely false assumption about sex trafficking.

"The reality is, we're seeing young people being recruited that are vulnerable due to poverty, homelessness, being abused at home," Holger-Ambrose said. "So traffickers are targeting those populations of young people, versus the population that's being talked about on these Facebook posts."

KARE 11 can verify much of the post is FALSE.

Holger-Ambrose said she wanted to emphasize that sex trafficking remains a serious problem, but misleading and false information can harm the discussion because it often plays to fears and harmful stereotypes.

Rahmanovic says the Iowa Department of Public Safety will continue to answer questions and offer information to the public about real missing person cases. She asks anyone who reads an unverified post online to call and look into it themselves, before sharing it with others.