Work zone flaggers can turn you in now

A new law allows those who control traffic in construction work zones to phone in the license plates of drivers who disobey directions. 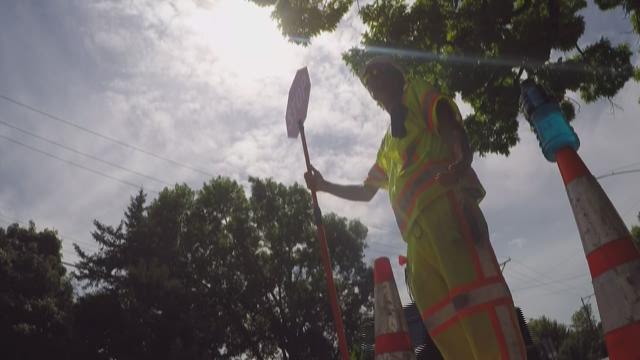 MINNEAPOLIS — The job may look monotonous, but the task at hand is critical: to protect motorists and the people working in construction zones.

And starting this month those roadside flaggers in Minnesota can turn in the license numbers of drivers who disobey their instructions. It they do it within four hours of the violation, it's an automatic ticket.

"A flagger has the ability to stop traffic, hold it, and then release it," Ken Johnson, the Work Zone and Pavement Marking Engineer for MnDOT, explained.

"If someone violates that direction, the flagger is able to take down that information and provide that to law enforcement. That's where the four-hour rule comes into play."

A common scenario is when a two-way street is temporarily reduced to one lane by a construction project, so drivers headed in opposite directions have to take turns using that one strip of pavement.

Carrie Robles, the business agent for the Laborers Union Local 563, says some motorists are just too impatient to wait, or the stop at the last minute because they don't see the flagger or the "Flagman at Work" sign before they get to the check point.

"You see a car kind of veer off because they weren’t paying attention. They veer off towards the ditch, so they don’t rear-end anybody."

On Friday afternoon Josh Pierce of Q3 Contracting CTC was posted on Interlachen Road, armed with signs and a two-way radio. He was directing traffic through the narrow corridor as CenterPoint Energy installed a new natural gas pipeline along the busy street.

"I understand that people are busy, and this might get them behind schedule. But we're just trying to keep everyone here safe."