Worker shortage is forcing higher wages and more benefits, but will the changes last?

Are these new perks a short-term fix? Or will the create lasting changes in the labor market? 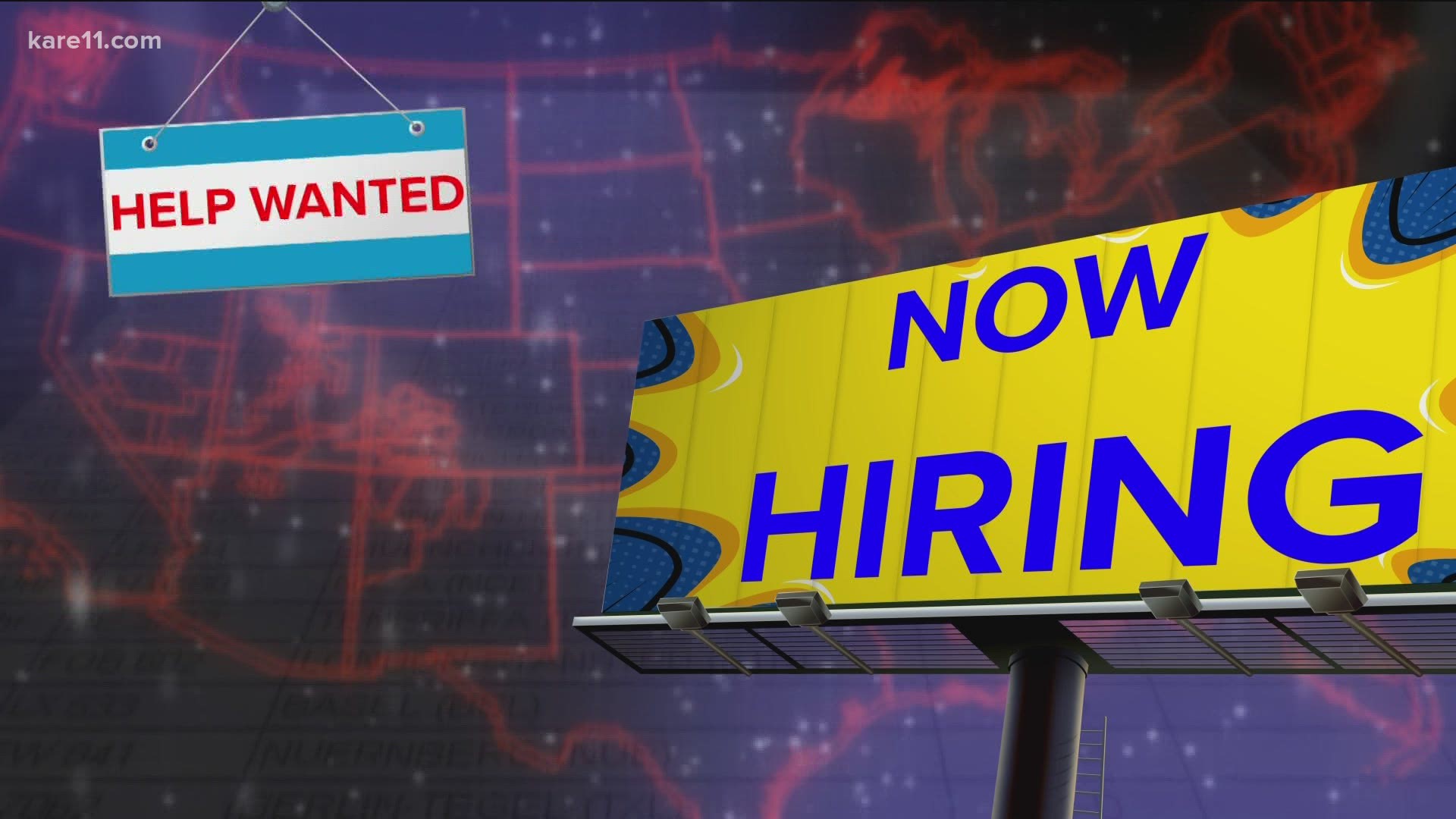 MINNEAPOLIS — Over the last year and a half, we've seen shortages of all kinds.

First it was toilet paper, and then groceries, then lumber, houses, cars and trucks, the list could go on forever.

The latest shortage, however, doesn’t involve material objects, but people, more specifically, people who are willing to work.

"There is right now a labor shortage across Minnesota,” Department of Employment and Economic Development (DEED) Commissioner Steve Grove says.

The latest numbers from the Bureau of Labor Statistics show nationwide there are more than 9.3 million job openings, a new record.

And with everyone looking for workers, Grove says employers have had to get creative to stand out.

"The employers that are having some success are doing some unique things, whether it's hiring bonuses, childcare support, raising wages,” Grove says.

Some of the more unique incentives include free chef knives for cooks and kitchen workers.

And at Applebee's they're offering free appetizers to anyone who will just sit through a job interview.

But other companies are going much bigger, offering to pay for college.

JBS, a food processing company, started a program in March that pays for an employee and one of their kids to go to community college or technical college for free.

And a lot of companies are just offering more money.

"Some upward pressure on wages has been long needed in our economy and we are seeing for the first time in a long time wages going up,” Grove says.

Higher wages has been a big social issue for a few years now, with many pushing for a new $15 minimum wage.

A lot of companies and industries have bumped up their pay, but many haven't.

Grove says the labor shortage we're experiencing right now may be the key to that movement moving forward, with companies forced to pay more to bring in new workers.

"It's not that we're seeing giant jumps, but boy, when you talk to those that are raising wages, they are seeing the effects of it. You know, Punch Pizza, their CEO has told me that when they increased their minimum wage to $15 an hour they saw a 500% increase in applicants,” Grove says.

But Grove says these wage bumps may not stick around long term.

While some companies may be looking to make permanent changes that will forever raise their starting wage, other companies are offering sign-on bonuses that are only meant to solve the worker shortage right now and will probably go away when it's over.

"I think for an employer a signing bonus is a one-time payment and doesn't lock you into a wage rate that is longer term,” Grove explains.

“And of course when you raise a wage rate with someone coming in the door you gotta look at the rest of your work force too and recognize the fact that you're letting the rookie come in at a higher level. So, there's broader effects of a wage rate than if you give a signing bonus."

Overall, Grove says the worker shortage is a good thing.

It's difficult when you're in the middle of it, but it's forcing a lot of companies and employees to have deeper conversations about what they need.

The skills employers are looking for and the benefits employees need for their personal lives.

By understanding one another better, he's hoping both sides will emerge from this pandemic stronger than ever before.