Lee Radzak is winding down a 36-year stay at this Lake Superior gem. 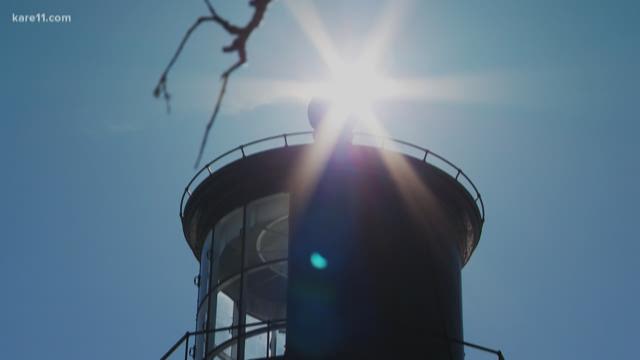 Credit: Boyd Huppert, KARE
Lee Radzak has been keeper of the Split Rock Lighthouse for 36 years

“Nope,” says the keeper the Split Rock Lighthouse, “and it never looks the same two days in a row. It's always a different view and different lighting.”

Soon, Radzak’s view will be changing in a more substantial way. Next month, Split Rock’s longest-serving keeper will retire.

“I always wanted to retire in the spring,” Radzak says, “so I would have a summer off.”

Radzak was 30 and a Twin Cities-based archaeologist with the Minnesota Historical Society when he was chosen as the 40th keeper of the Split Rock Lighthouse.

In keeping with tradition, Radzak moved into a brick home a few feet from the lighthouse, just like the keepers who preceded him.

“My wife and I had been married for three months and my mother always said, ‘It's either going to make or break your marriage,’” Radzak says. “We've lasted for 36 years so we're doing pretty well.”

During those 36 years, Lee and Jane Radzak welcomed two children who grew up with everyone else's vacation destination in their backyard.

Thirty-five keepers resided at Split Rock before 1969, when the lighthouse was retired from navigational service. During Split Rock’s active years, three keepers took shifts pulling the weights that spun the giant Fresnel lens.

Now, just one set of backsteps remains shoveled at the side-by-side homes. “Just my wife and I and the cat right now,” Radzak says.

One of the adjacent homes has been restored for tours, while the other is used for storage.

Radzak thinks often about the keepers who climbed the lighthouse’s spiral staircase before him.

“Pete Young was the first head keeper that served at Split Rock - 1910 to 1928,” he says, shuffling through old black and white photos.

Credit: Boyd Huppert, KARE
Lee Radzak poses with photos of some of the 39 lighthouse keepers who came before him at Split Rock.

Radzak won’t name each of the 39 keepers before him, but as he rattles off one after another, it seems like he could.

“There's Frank Covell right there,” Radzak says, pointing to another photo. “There we have old Walt Johnson, he's doing that exterior painting on the fog horns.”

When they weren’t operating the lighthouse, maintenance filled the days of the earliest keepers.

Resourcefulness was part of the job. “They shot deer in the forest and they had gardens here,” Radzak says.

In the earliest days, roads to the lighthouse were non-existent. “Just to get the mail it was a five-mile boat ride taking the skiff and rowing to Beaver Bay,” Radzak says.

The children of the keepers grew up in the ultimate playground. Pictures from the era show them playing along the Lake Superior shoreline, same as the Radzak kids.

The grounds abound with similar past-to-present connections, including the ring in Radzak’s pocket, on which skeleton keys dangle next to a Toyota fob.

Still, the connections only go so far. As Split Rock’s historic site manager, Radzak’s duties have been more tourism-related than navigational.

“It’s like living in a fishbowl in one sense,” Radzak says. “But on the other hand, it’s pretty isolated when it’s this time of year or at night when it gets nice and quiet.”

April 12 will be Radzak’s last day at work.

His second-in-command will take over as interim site manager while the historical society begins a formal search for Radzak’s replacement.

“This place has been here 108 years,” Radzak says. “I've been here 36 years, so that's literally a third of the history of Split Rock that I've been here.”

Leaving his job also means Lee and Jane Radzak must move from their home.

“I think we’re going to move south to Duluth – where it’s warmer,” Radzak says with a grin. “That’s where we’ll probably end up. We don’t want to get too far from the big lake, it’s kind of in our blood.”

Leaving Split Rock will be easier for Radzak, knowing the gate will still swing open.

“We can come back anytime,” he says.

Split Rock will leave a light on.

PHOTOS: Land of 10,000 Stories: Keeper of the lighthouse