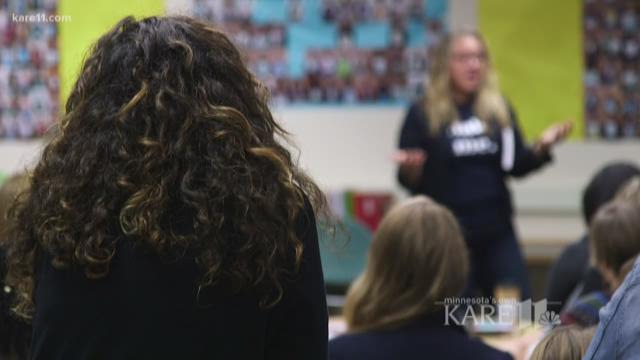 MINNEAPOLIS - Educators at Lucy Craft Laney Elementary in north Minneapolis know it’s a controversial topic, but invite you to listen to their own linguistic revolution, honoring the home dialect of students at a school where more than 80 percent of kids are African American.

“I would imagine there would be some comments, like yeah, teach those kids how to speak English,” said Mauri Friestleben, Lucy Craft Laney principal. “I refuse to be living in an educational reality has the children walk in the door viewed as ignorant, stupid, uneducated. As they come into this door, they will be validated from their head to their toes."

In fourth-grade science, Mr. Edward Davis knows how two worlds connect, seeing himself in his students, as an inner-city Milwaukee kid who never dreamed he could become a teacher.

“English when I got to high school was a rough patch for me, because I couldn't switch, couldn't translate it,” said Mr. Davis. 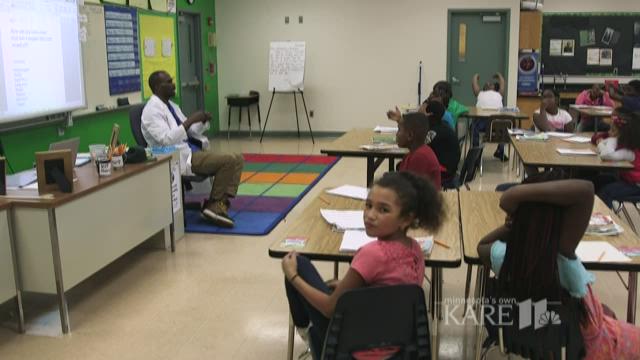 “I remember getting corrected on so many times is when I used to say "finna," I am finna going to this. They'd be like you are about to go here, going to do this,” said Davis.

Only during college did Mr. Davis master what it means to code switch, for him, alternating between the dialect he knew, and the dominant white dialect.

“I understand it's my own way of speaking, something I am more proud of, before it was a burden, something I was embarrassed of,” said Davis. “It might look different or sound different than the way white Americans speak but that's OK, but you should feel comfortable who you are, when you come into our classroom, I accept you for everything you bring.”

In first grade, Ms. Angie Ellefson realized her own role in rewriting a narrative, after reading her students a book in black vernacular.

“I consider myself a competent fluid reader and I am reading these books with black vernacular, I am clumsy and stumbling and really uncomfortable,” said Ellefson. “I was thinking I was drawing students into literature every day, really what I am asking to do every day coming into my room and reading books in standard English, is to really put themselves in that same place of discomfort I felt. It's really a shame.”

Ms. Ellefson’s revelation changed the way she teachers, guided by the revelation that if her students couldn't see themselves in a story, how could they fit into a system?

Dr. Munson cites research tracing AAVE back to its roots in West Africa.

“To think that this was a language born when people were enslaved and treated like animals and brought to the United States to essentially build this country's economic base, that white Americans disproportionately benefit to this day,” said Munson.

Munson's own work shows the most successful communicators command several ways of speaking, whether it’s language or dialect.

“I am thinking of a quote by Maya Angelou, ‘I Know Why the Caged Bird Sings,’ where she talks about she and her classmates learning early on, there was a way of speaking in school, and a way of speaking they used with one another,” said Dr. Munson.

Angelou writes, "At school, in a given situation, we might respond with "That's not unusual." But in the street, meeting the same situation, we easily said, "It be's like that sometimes."

“Let’s think about the Golden Jazz age in Harlem and the incredible literature that came out of that that is one of our national treasures. 'heir Eyes were Watching God,' 'Song of Solomon,' 'Beloved,' 'The Color Purple,' 'Invisible Man,' those are national treasures in the U.S. and they have AAVE in them, and they are part of our great country, and a contribution to world culture,” said Dr. Munson.

Dr. Munson’s research also finds that children who don't spontaneously learn to code switch experience the most difficulty at school.

“So, it's important to me as a school community we address that,” said Friestleben. “There is nothing negative about a different dialect, nothing bad about it, in fact, you are going to be, I've used the term bidialectal.”

Friestleben offers an example, with the use of the word ask, or “axe” in AAVE.

“When you write in your essay, she axed him to the dance, you have to write in the Academic English appropriate way which is asked, so I am going to help you transfer that and translate that,” said Friestleben.

In the same way teachers would help a student learning English for the first time, Friestleben advises staff to apply English language learning strategies to children who speak different dialects.

“This is an important conversation for all educators, because language is how children communicate the mastery of their concepts. It shouldn't be how they communicate their mastery, should be whether they've mastered or not,” said Friestleben.

Keith Mayes, professor of African American studies at the U of M, believes the key to transforming mindset on AAVE could come through higher education, developing curriculum for teachers to study AAVE.

“The beauty of AAVE, have you ever heard somebody say that before? The beauty of AAVE?” said Mayes. “White people use black vernacular English all the time, whether in slang or they like might like rap music, there is AAVE all around us and white people revel in it.”

A controversial debate over the use of black dialect played out in Oakland, California in the 1990s, after a call for the recognition of Ebonics as a bridge to learning standard English created a nationwide firestorm.

“We cannot come to a consensus on this issue. The central question – who is going to do this work of retraining of teachers to meet the needs of kids? There is another conversation that needs to be had about the curriculum and contribution of black folk and white folk about using this language in its various forms order for this to be taken seriously,” said Mayes.

A complex tapestry of language may require a complicated solution, but Lucy Laney educators believe change can begin with acceptance, no matter how it’s said, or heard.

“If I had it my way, our standard of academic excellence would not be in one dialect. I would be able to assess their mastery of concepts a dialect that is familiar to them. We, as a society, do not value these dialects as a good faith effort on behalf of their groups, rather we look down upon them. I don’t think we honor that attempt on their part. The evolution of these dialects comes from a very pure place,” said Friestleben. “It’s important for me as an entire school, we do not match intelligence with linguistics, or academic proficiency with dialect.”