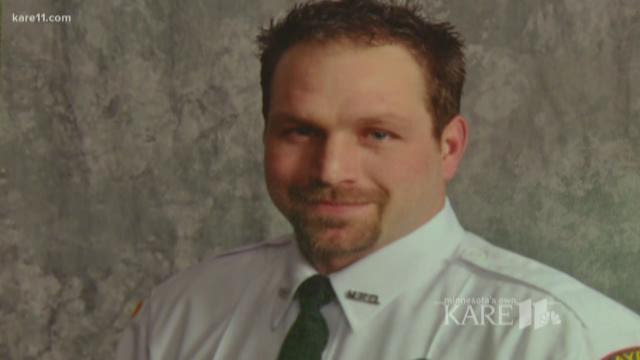 MAYER, Minn. - Mayer Fire Captain Jeffrey A. Vollmer died early Tuesday at his home from an apparent heart attack. He was 40.

Captain Vollmer was a second-generation firefighter and a 12-year veteran of the Mayer Fire Department. He was a graduate of Ortonville High School and the University of North Dakota at Grand Forks.

In addition to serving as a firefighter, Captain Vollmer was employed as a construction journeyman and had operated his own business. "He was, you know. The best as you could have," said Mayer Fire Chief Rod Maetzold. “He was a great firefighter and a great guy.”

Maetzold says fellow firefighters were called to Vollmer's home roughly six hours after a strenuous firefighting training course. "3:55 a.m. we got the call. Some of the guys knew the address, and say that's Vollmer's (house.) We were not expecting him."

We have been in touch with Mayer Fire Department officials and they are devastated by the death on Tuesday of Capt. Jeff Vollmer. We are keeping Capt. Vollmer's family, friends and colleagues in our thoughts during this difficult time. #LODD https://t.co/zdi665T87C

Governor Mark Dayton has ordered all flag fly at half-staff Saturday in honor of Vollmer.

Vollmer leaves behind both parents, his wife Emily and two daughters: Anika, 9, and Kennedi, 7.

Firefighter Dennis Clark is a friend of Vollmer's and has been with the Mayer fire department as a volunteer for 6 years. “He was the type of person you could approach,” Clark says. “He was a great dad. I want people to know that this isn't a headline, a firefighters dies in the line of duty. There is a really great person behind that.”