The minimum wage increased Sunday in Minneapolis as the city phases in a $15-an-hour rate by 2024. 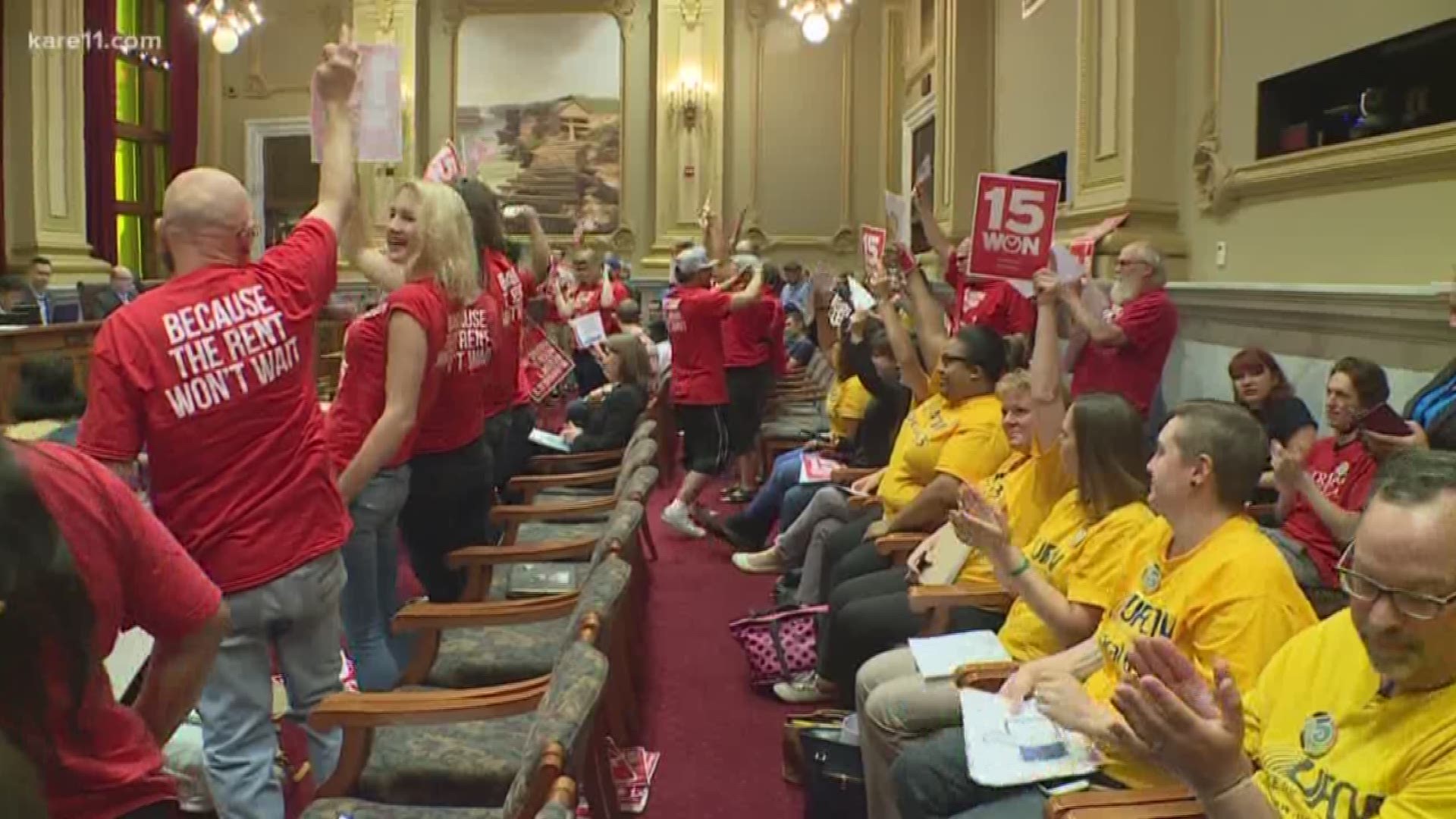 MINNEAPOLIS - The minimum wage for both small and large businesses in Minneapolis increased slightly on Sunday, representing just one phase in the city's incremental plan to pay all workers at least $15 per hour by 2024.

Effective immediately, small businesses with 100 or fewer employees must pay an hourly wage of $10.25 for the next 12 months. Large businesses, which already saw an increase in January, must now raise their pay to $11.25 per hour.

"For our lowest-wage workers in the city of Minneapolis, this is going to be a really big deal," Minneapolis Department of Civil Rights Director Velma Korbel said. "This is going to mean more money that they're taking home and putting in their pockets every day."

The city's plan does not include tip credits, meaning employees like waiters and waitresses must make the full minimum wage regardless of how much they collect in tips during a given shift. The Minnesota Restaurant Association, among others, has pushed for the tip credit as a way to ease the burden on employers and allow tips to supplement base minimum earnings.

Jason Dorweiler, the owner of Tori 44 Ramen in North Minneapolis, said the incremental increase taking effect Sunday won't affect his operations too drastically. Many of his workers already make $11 or $12 per hour already, he said.

However, his restaurant is bracing for a hit in 2024 and beyond.

"I think what really is gonna get hard and difficult is when it gets to 15," Dorweiler said. "It's gonna make things a lot more competitive for the workforce, too. People are going to hit that 15 automatically, and what is it going to do with more experienced people who are going to want a better pay than 15?"

"I don't know how it will work out," Dorweiler said.

Business owners and some conservative lawmakers have often criticized the nationwide push to $15-per-hour, arguing it will undercut employers' budgets and force them to lay off the very workers a wage increase is designed to help.

Workers' advocates and many Democratic politicians, however, have long claimed that employees cannot live off the minimum wage set in many states and cities across the United States.

Minneapolis was the first Midwest city to pass a $15-per-hour minimum wage plan, joining other high-profile cities like Seattle, Washington, D.C. and San Francisco. In Seattle — where a $15 minimum wage is already in effect for large businesses and takes effect for small businesses in January — the results have been mixed so far. Some research suggests it has been a net positive, whereas other studies suggest the policy has delivered a blow to employers already.

The minimum wage debate is playing out in similar fashion in St. Paul, where Mayor Melvin Carter has shown strong support for a $15 minimum wage. The city has not yet approved any plan, however.

"We knew a lot of people wouldn't be happy, but here's the thing: What we do find is that employers and employees in the city of Minneapolis do want the city to be prosperous for all," Korbel said. "And for the most part, all of our employers have supported that."

If employers do not comply with the wage increase for whatever reason, employees can file a complaint through the Department of Civil Rights and the Labor Standards Enforcement Division, either online, through 311 or in person at City Hall.